Rise and Occupy: Protesters around the globe connect, lashing out at inequality, cronyism and dysfunctional governments 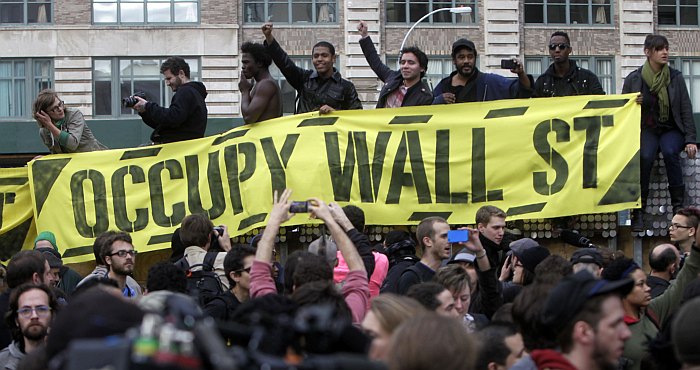 Police in New York City, Boston, Los Angeles, Baltimore, San Francisco and many other American cities may have evacuated peaceful demonstrators of the Occupy movement. But that’s done little to quell the unsettling discontent sweeping the globe.

Concerns of the Occupy movement in the United States are linked with protests from afar. One of the most poignant moments during Occupy Wall Street was when the Egyptian flag was hoisted over Wall Street. Unspoken irony and exuberance swept like a wave through crowds at Zuccotti Park. Protest leaders from Cairo’s Tahrir Square had joined Occupy Wall Street.

Egyptian protestors explained to Occupy protesters how Washington spends US$1.3 billion each year supporting Egypt’s military. The funds Mubarak used to repress human rights, and those Egyptian protestors themselves, could have been spent in the United States to upgrade infrastructure and create jobs.

The Egyptians’ words struck an anti-war nerve. Zuccotti Park had the nostalgia of 1969, but the issues run far deeper. A vast cross-section of America has merged, and Occupy Wall Street represents a microcosm of America.

Left or right, both sides have lost jobs. Protestors decry unemployment, rising inequality and home foreclosures, unprecedented since the Great Depression. Within span of a decade, America’s financial might was exhausted by unnecessary wars, fiscal stimulus wasted, and rewarding bailouts to bankers gone rogue. For Americans, the Wall Street–Washington coterie has become as much a symbol of incompetent government, politics of oligarchy and economic squandering as Mubarak and his military cronies are to the Egyptian people – a point that hit home as the Egyptian flag unfurled in a crackling autumn wind over downtown Manhattan.

Protesters have responded by occupying public space, engaging in non-violent disobedience and forming transparent ad-hoc governing councils in open areas. They espouse issues, but do not promote personalities, an antithesis to the political arrangements they decry. They release their messages through unedited live news streams via the internet.

The peaceful revolution has gone global.

These protestors demand more than just a new swap of politicians. They call for reconstructing the global financial architecture. This requires new economic models to replace outdated ones, fundamental policy changes and a reassessment of underlying assumptions and values long taken for granted.

OWS are protesting against policies that endorse “greed” and call for a new consensus.

The “Washington Consensus” is neoliberal economic model that suggests unfettered markets will reach equilibrium, by promoting liberalization of trade, privatization and deregulation. It was first coined in 1989 by John Williamson an economist at the Institute for International Economics. For decades, it’s been an unquestioned mantra, applied cookie-cutter globally by the World Bank, International Monetary Fund and the US Treasury. Under this mantra, capital markets trading debt-leveraged instruments became the source of wealth creation. Globalization by multinational corporations during these same years outsourced productivity to gain global markets, pushing stock prices up, while turning America’s once vibrant communities into ghost towns. Mass consumerism promotes a mono-cluster of brands, stripping them of character and identity.

Today there are calls for a new structural adjustment, not by economic theorists, but by protesters alarmed by inequality. A new Global Consensus could be emerging.

Resistance to the Washington Consensus started 15 years ago. During the 1997 Asian Financial Crisis, China refused unsolicited advice of the World Bank, the IMF and the US Treasury and merged planning and market to forge a mega-economy. Labeled the “Beijing Consensus” by Joshua Cooper Ramo of Kissinger Associates, it promotes subsidies and reforms in emerging economies in pursuit of innovation, multilateralism, distribution of opportunities and sustainability

Activists across the developing world have come to the realization that standard economic measures overlook key components of well-being and stability. Thus, new measures and programs emerged from Asia – the Himalayan Consensus, articulated with the father of microfinance Muhammad Yunus, and the “gross national happiness” championed by Lyonpo Jigmi Thinley, prime minister of Bhutan. Three principles have emerged: protecting ethnic diversity and local identity, achieving sustainability through local businesses while empowering individuals through microfinance, and giving back to the community while prioritizing environmental protection.

Likewise, an African consensus, with a fresh approach to development, could be seen emerging from the 2011 World Social Forum in Dakar. Enthusiasm emerged about the role of civil society with small-scale businesses supporting social-environmental programs and community development. With 40 percent of African productivity coming from the informal sector, Africans have bypassed corrupt dysfunctional governments and failed international aid programs. The African Commission on Human and People’s Rights Forum, with NGO representatives from 54 African countries, adopted the African Consensus Declaration in Gambia on April as a fresh economic paradigm.

Meanwhile, corporations are rethinking their role in order to survive: Are their goals just profits, shareholder values or management bonuses? How a corporation contributes to sustainability – what it does for its communities, the environment or employees – should that be measured, too? New corporate responsibility schemes are being hatched, green-technology and social-enterprise funds being launched. In the end, government must respond with trade policies and fiscal incentives that guide corporations toward new patterns of behavior.

Governments must reexamine their responses, too. Stimulus to create rapid consumption does not solve economic hardship because too much consumption is one of the problems. We share a planet of diminishing resources. So consumer behavior must change as well. Stimulus funding needs to be invested into communities, education, upgrading infrastructure and power grids that accommodate renewable energy – all of which will create new jobs.

On November 29, The African Consensus tabled a document called the Global Consensus on Climate Change, backed by civil society groups during the UN climate change talks in Durban, South Africa. They called for three stakeholders – business, government and civil society – to adopt self-mitigating measures to reduce greenhouse gasses. Seeking leadership from China and India where the US has failed, they called for immediate action to break the annual stalemate in UN Framework Convention on Climate Change negotiations, by tabling a “minimum common denominator” points that civil society and developing nations can agree upon. This could be the face of new consensus at work.

“Consensus” is the word on the streets of Africa to America. Nations reached a climate agreement in Durban, but real long-term global consensus within multilateral organizations and the financial system itself remains elusive.

One thing is clear. Global values are changing. They’re better understood and placed in a new context. We share a multiethnic world of rapidly diminishing resources. The values and assumptions underlying economic formulas, the functions of our financial architecture, must change, too.

Thanks to peaceful revolution, a new global consensus is emerging.

Laurence Brahm is a lawyer, political economist and author. He has been with protestors at Occupy Wall Street. Rights:Copyright © 2011 Yale Center for the Study of Globalization. YaleGlobal Online