vastra, meaning cloth. It refers to the piece of cloth gifted by the tutelary deity Danteshwari to Annam Deo, the legendary chief of Bastar.

The earliest archaeological evidence of settlement lies deep inside the forests of northern Bastar. These include a Buddhist site at Bhangopal, dating back to the 5th and 6th centuries CE, as well as the early brick temples at Garh Gobrahin.

Visit Bastar to explore the complex relationships between tribes and contemporary civilisation.

The best way to see Bastar is to set up base in Jagdalpur, the administrative centre of the district, and make excursions to the areas around. The town is situated on the banks of the Indravati River and is comparatively clean.

The Zonal Anthropological Museum in Jagdalpur could be your first foray into Bastar’s unique world. It gives you an idea of different tribal groups, their customs and forms of worship. The tribal groups – mainly sub-groups of Gond – include Abuj Maria, Dandami Maria, Muria, Dhurwa, Dorla, Bhatra and Halba.

Further ahead at Jagdalpur, at the head of the main bazaar, lies the royal enclave. Known as Bastar Palace, it is out of bounds for tourists, although the Durbar Hall is open to visitors invited by the Rajmata. The Dalpatsagar Lake is nearby. In winters or after the rains, you can avail of boat rides on the lake. Close to the lake is the splendid Danteshwari Temple.

At the confluence of Dankini and Sankhini rivulets is the Danteshwari Temple of the tutelary deity of the Kakatiya kings of Bastar – the six-armed black Danteshwari, now appropriated as one of the Shaktipeeths. A tooth of Shakti, consort of Shiva, is said to have fallen here. The temple has been renovated many times. The Kakatiyas are reported to have given it a facelift in the 14th century. However, the temple as it stands now is a result of early 20th-century renovation.

In the 11th century, Barsur was the capital of the Nagavansi dynasty. This kingdom, known as Chakrakot, fell prey to several incursions from the South, including one by the Kakatiyas under Annam Deo, who established his rule in Bastar around 1424-25. Bastar remained under the control of Kakatiyas till modern times.

At Barsur (on the Bastar-Dantewada border), you can see the ruins of a temple complex, the origins of which can be traced to the 12th century. The temples include a Shiva Temple (built in 1109 CE), with 12 stone pillars carved on the outside, with nude figures. A 19th-century ruler had them defaced.

A ruined Ganesh temple is situated nearby. The 50-ft-tall Mama Bhanja ka Mandir is better preserved and has carvings replicating bells hung from chains. Another Shiva Temple has a common court of 32 pillars. These temples point to the existence of Hinduism in the region, but neither its origin nor the reach it had are known as of now.

Artisans in Bastar sell their handicrafts to various co-operatives, which have their outlets in Kondagaon, Parchan Pal and Kumharpara villages. An estimated 15,000 artisans work with bamboo, jute, terracotta, wrought iron and bell-metal and create simple yet en chanting objects. Nagarnar (20 km from Jagdalpur, and off NH43 towards Visakha patnam) is well known for its terracotta work; Kondagaon (70 km away on NH43 en route to Raipur) has many bell-metal artisans. Close to Kondagaon is the Bastar Aadi Shilpa craft centre in Bhelvapadar. Kumharpara (74 km away, a kilometre from NH43 on Narainpur Road) has beautiful terracotta items at Saathi Samaj Sewa Sanstha where you can also see artisans at work. At Chilkuti (20 km from Jagdalpur), you can pick up bell-metal craft items.

The craft of casting bell metal by the lost-wax process is the most popular art form here. The process involves making a mould with a thread drawn from bee wax, between two layers of clay. Molten metal is then poured into the mould and the wax drained out. The method, called ghadawa or dhokra, is used to make idols.

The haat is generally dominated by women except in one arena – that of cockfights, where men rule the roost as cock-trainers or punters.

But the village haat is now fast changing its character, influenced in equal measure by the permanent markets in town and the invasion of plastic. One unchanging practice, though, is the consumption of the local brews. Landa and mad are brewed from rice and mahua respectively, while sulphi is the fermented sap of the palm tree. The brews are treated as refreshing ales and are served free.

Most hotels have restaurants which serve the standard south-Indian, north-Indian and Chinese fare. The Bastar region is known for its fresh fruits and greens, especially gigantic papayas and custard apples, which sellers pile high along the roadside for customers after the monsoon. Hotel Batra, Celebration and Babylon in Raipur are popular for their hearty Punjabi fare.

When to go September to March Location Bastar is in southern Chhattisgarh. Maharashtra lies to the west and Odisha to its east Air Nearest airport: Raipur Rail Nearest rail: Jagdalpur 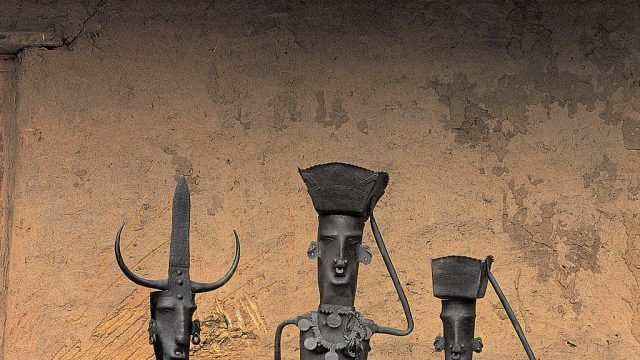