Come June 14, the world will descend upon Russia. It’s been four years since Germany lifted the

World Cup, beating Argentina 1–0 in Brazil, and the football fraternity is waiting to see what happens this summer. While Russia has always been a favoured destination among true travellers, it’s usually Moscow and St Petersburg that have been on the itinerary. However, there are nine other cities playing host to World Cup football matches, which opens up a whole new travel experience for the fans.

View of the Kazan Kremlin

Located where the Volga meets the Kazanka, this city is a melting pot of cultures. It is also called the ‘sports capital of Russia’, having hosted other such events. Kazan was founded in 1005, which makes it older than Moscow. Fans can enjoy the architecture of the city, steeped in history with its various mosques and churches, and the Kremlin should definitely be on the must-visit list.

How to reach: By air or rail from Moscow

Overlooking the Luka mountain at Samara

Not very far from the Kazakhstan border, Samara is also known as Kuybyshev, in honour of the Bolshevik leader Valerian Kuybyshev. The diverse city, which sits at the junction of the Samara and Volga rivers, is home to Russia’s aerospace centre where the rocket, Vostok 1, that took Yuri Gagarin to space, was built. If the city is not to your liking, head outdoors to the Samarskaya Luka National Park to fall in love with nature, or trek the Zhiguli Mountains. An evening stroll by the riverside is always enjoyable.

How to reach: By air or rail from Moscow and other important cities

This city has a very colourful past. It was where the Romanovs, the last imperial family, were executed in 1918. Today, on that spot, stands the Church on Blood in Honour of All Saints Resplendent in the Russian Land. The tall, clean structure with its white walls and golden domes is the city’s most popular tourist site. There’s also the Vysotskiy Viewing Platform from where one can enjoy the beautiful skyline after a long day of football. Also worth a visit: the Boris Yeltsin Museum.

How to reach: The Koltsovo International Airport is connected to all important cities

The Lighthouse beach in Sochi

Apart from Moscow and St Petersburg, Sochi is a place you may have heard of. The city hosted the 2014 Winter Olympics, which, again, had its share of controversies. Apart from football, there is art and history to draw tourists. Visit Joseph Stalin’s summer house (dacha), explore the region’s tea plantations, and take in a view of the Black Sea or even dive into its waters. Sochi’s subtropical climate makes it the unofficial summer capital of Russia. Foodies, be sure to try Caucasian cuisine which is extremely popular there.

How to reach: The Adler/Sochi International Airport is well connected

The tiny city is wedged between Poland and Lithuania on the Baltic sea coast and though it doesn’t offer much in terms of tourist attractions, it does pack in a few surprises. The former military zone is popular due to its UNESCO-protected Curonian Spit, a 98km-long, thin strip of sand dune, which is shared with Lithuania. The renowned philosopher Immanuel Kant’s tomb is at Königsberg Cathedral, which is another attraction. The one thing to definitely take back home is amber, which the city is obsessed with.

How to reach: By air or rail from Moscow, or ferry from some European cities.

One of the oldest cities in Russia, it has survived the onslaught of modern architecture. It was previously known as Gorky in honour of the author. The city was closed to the public during the Soviet era, but today visitors can enjoy art, architecture, and food along with some football. The Kremlin, built in the 16th century, is definitely a major attraction, while the Church of Nativity reminds one of a fairytale castle. Don’t forget to walk down Bolshaya Pokrovskaya, the oldest street in the city.

How to reach: Strigino International Airport is well connected

People at a street in Rostov On Don

This port city along the Don river is perfect for a holiday. Experience the culture and lifestyle as you discover local delicacies at Rostov’s Central Market. The city has numerous tourist sites to honour renowned authors like Maxim Gorky and Alexander Pushkin. It also boasts of numerous parks and cafés. After a walk and a bite, do head over to see the Bogoroditsa Cathedral.

How to reach: The newly constructed Platov International Airport is open for business

Monument to Admiral Ushakov in Saransk

This city is named after the river Saranka. The capital of Mordovia, Saransk is culturally and historically rich with beautiful mosques and cathedrals. A visit to the Museum of Mordovia Folk Culture or the triumvirate of beautiful squares—Millennium Square, Victory Square and Soviet Square—is a good idea.

How to reach: Daily direct train from Moscow, or by air

Interiors of a building in Volgograd

The city’s past is hard to ignore. Formerly known as Stalingrad, its siege during World War II was one of the most devastating in history. The Motherland Calls, the tallest statue in Europe, which commemorates those fallen at the battle, is a popular and sacred attraction. Apart from that, take a walk in Komsomol Park or check out Lake Elton.

How to reach: By train from Moscow, or fly in to the Volgograd International airport from other cities

This city is home to the country’s many royal palaces. Not only is it on the must-visit list of travellers in Russia, but is also popular among locals. With seven World Cup matches scheduled at the St Petersburg Stadium, fans can take time out to experience the city in their free time. The Hermitage Museum should be a priority. There’s also the Church of the Saviour on Spilled Blood, the Kazan Cathedral and Saint Isaac’s Cathedral.

The most important location for true football lovers, two stadiums will host World Cup matches. While the Luzhniki Stadium will be used for the opening match, a semi-final and the final apart from other group ties; the Spartak Stadium will host five other ties. The city itself is one of Russia’s most famous tourist attractions—from the Kremlin to the Red Square, Lenin’s Mausoleum to St Basil’s Cathedral, shopping to art, Moscow offers tourists a variety of experiences. If shopping is one of your interests, head to Izmailovsky Market and, of course, GUM, the city’s most popular department store. Even the Soviet-era metro stations are worth social media photographs. Don’t forget to take time out for a dip at the banyas (sauna). And those who enjoy nightlife will find plenty of options here. 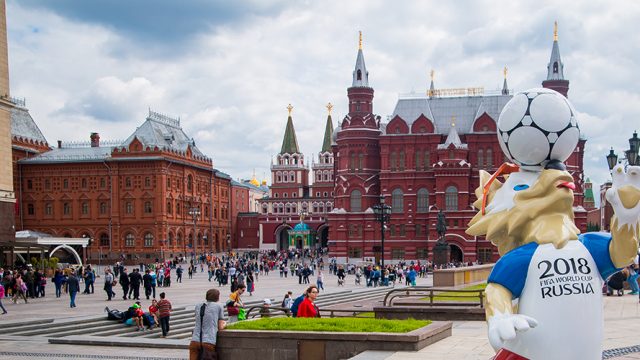 Five Things To Do In Russia

It is football time and Russia has a host of things to offer visitors. Carrying your Citi Credit and Debit Cards will only make the trip sweeter