Ladakh’s biggest summer festival at the Hemis monastery just got bigger this year. Renowned for its colourful

masked Chams dance, the festival has been held regularly for 286 years. The monastery was founded in 1620 by the then Ladakhi king Sengge Namgyal and the Drukpa monk Stagtsang Raspa. The summer festival at Hemis, called the Tsechu, was established ninety years later in 1730 under the Gyalsras Rinpoche. The festival celebrates the birthday of Guru Padmasambhava, probably the most important saint in the propagation of Buddhism in Tibet and the Himalayan area.

This year was special as it was the Monkey Year that comes about every 12 years. Accordingly, this year’s celebrations were even bigger, with the big draw being a gigantic three-storey silk thangka of Padmasambhava, made in 1750, that was unfurled at dawn. This followed an entire night of festivities and preparations as the monks got ready for the day’s main dance that paid homage to the eight manifestations of Padmasambhava. But before the performances began at 10 am, there was enough time for Ladakhis from Hemis village and other parts of the Indus Valley to make a quick pilgrimage, or kora to the cave hermitage of Kotsang, deep in the mountains behind the monastery. A tantric retreat for Drugpa monks of Hemis, some of whom spend as much as nine years practicing austerities and meditative sadhanas here, every year Ladakhis do this short trek to offer pujas at the cave shrine and be blessed by the resident monks of Kotsang.

The performance, when it began, started with the famous ‘Black-Hat dance’ by a group of monks in full tantric regalia. This performance recreates the dance that Padmasambhava had himself performed to subdue evil spirits and remove spiritual obstacles when the first ever monastery had been set up in Tibet at Samyas. This was followed by a dance of the divine dakinis, led by the supreme tantric goddess Vajrayogini, and finally the dance honouring Padmasambhava. During this, eight dancers wearing masks signifying eight stages from the spiritual career of Padmasambhava danced around the central flag pole and were then paid homage to by the monks and other dancers. This particular performance, an important one in the religious calendar of the Ladakhis, ended with each of the manifestations performing a solo dance. The huge thangka of Padmasambhava was then rolled up and the festivities were suspended for lunch. The rest of the performance resumed in the afternoon with ritual dances that celebrated the propagation of the Buddha Dharma and protected it from evil influences and blessed the land with prosperity. 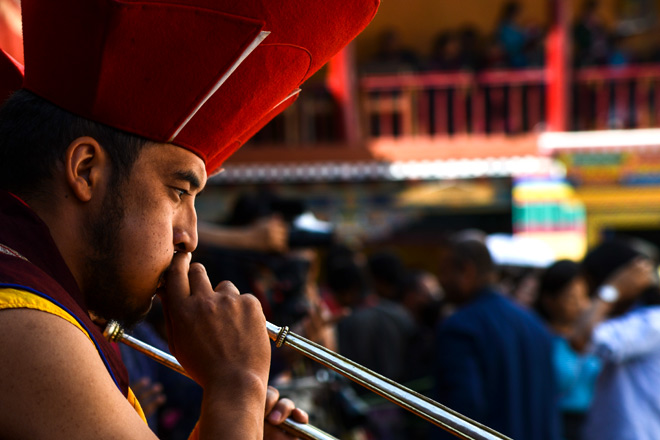 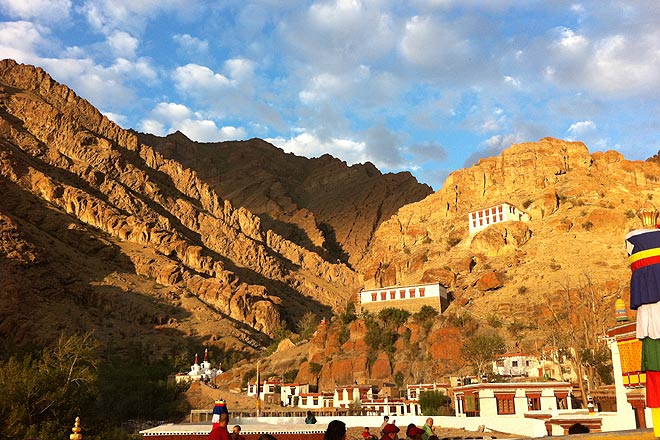 The mountains behind the Hemis Monastery lit up at sunrise 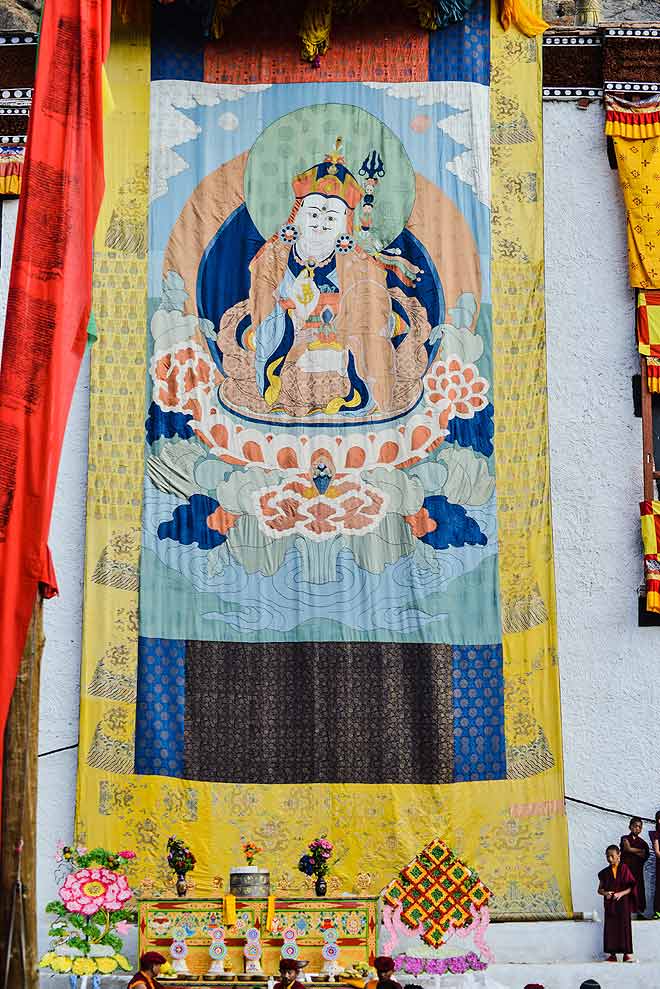 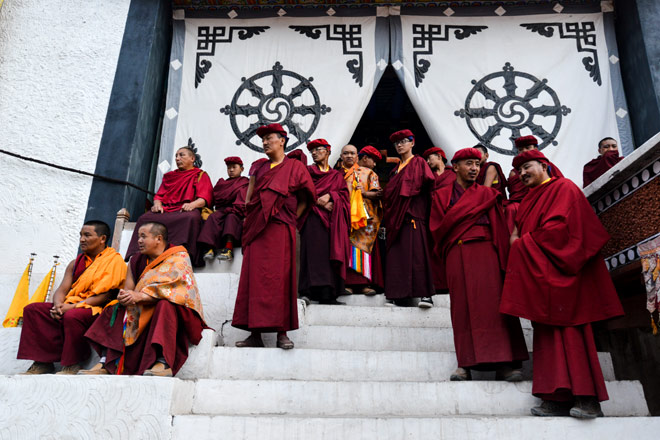 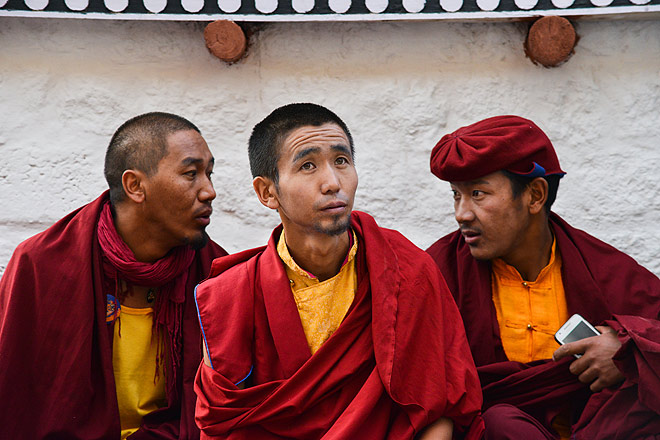 Drukpa monks at the Hemis Monastery 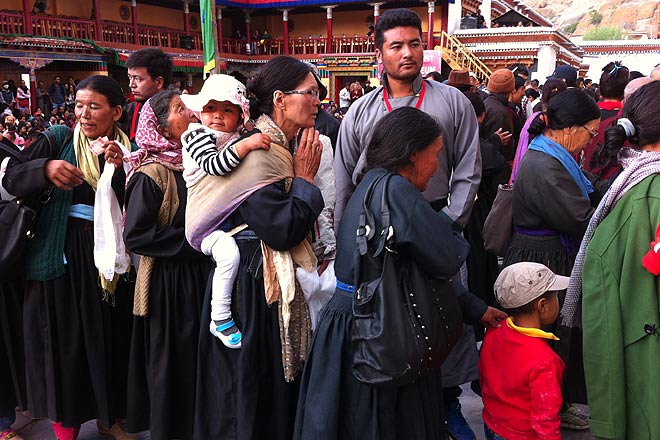 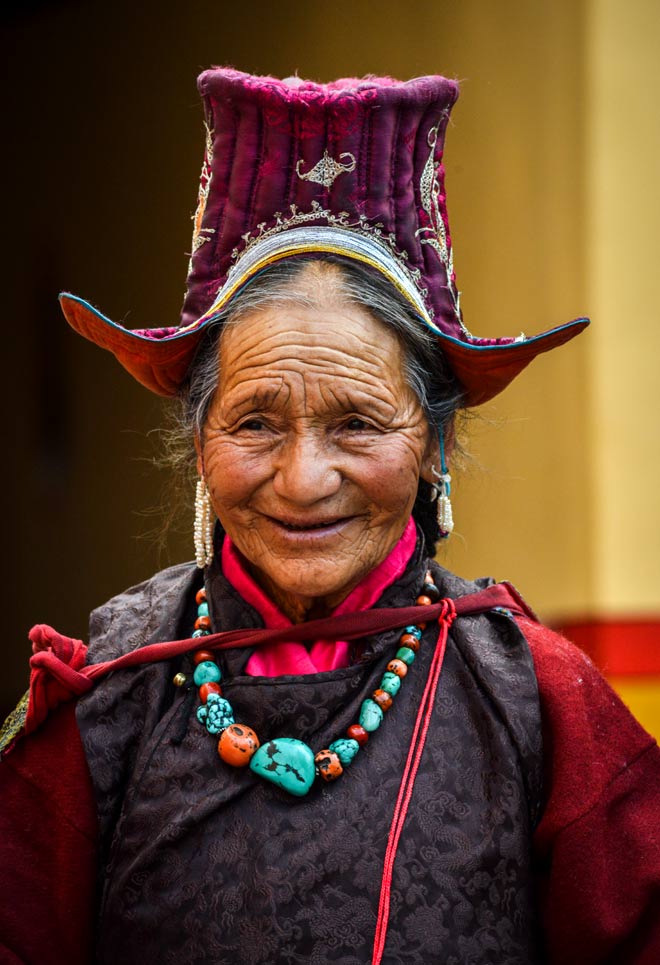 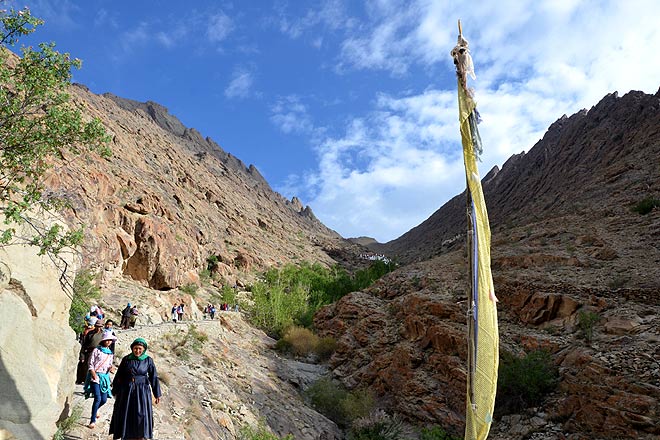 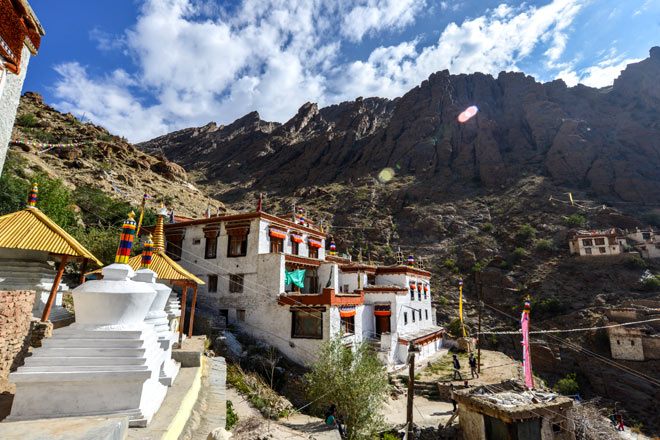 The cave hermitage of Kotsang, deep in the mountains behind Hemis, where locals go for a pilgrimmage kora in the morning of the festival 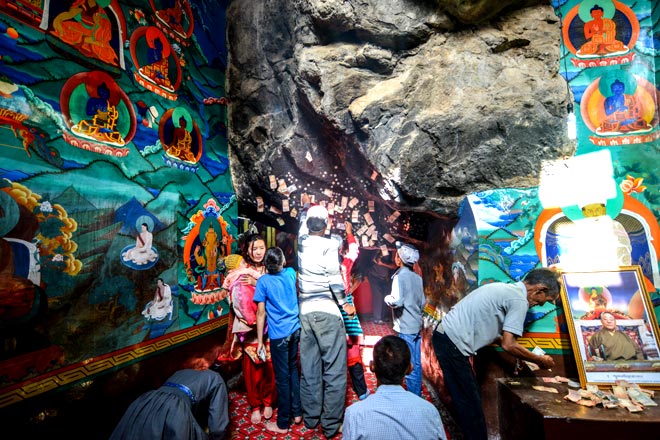 Locals pray at the cave hermitage of Kotsang 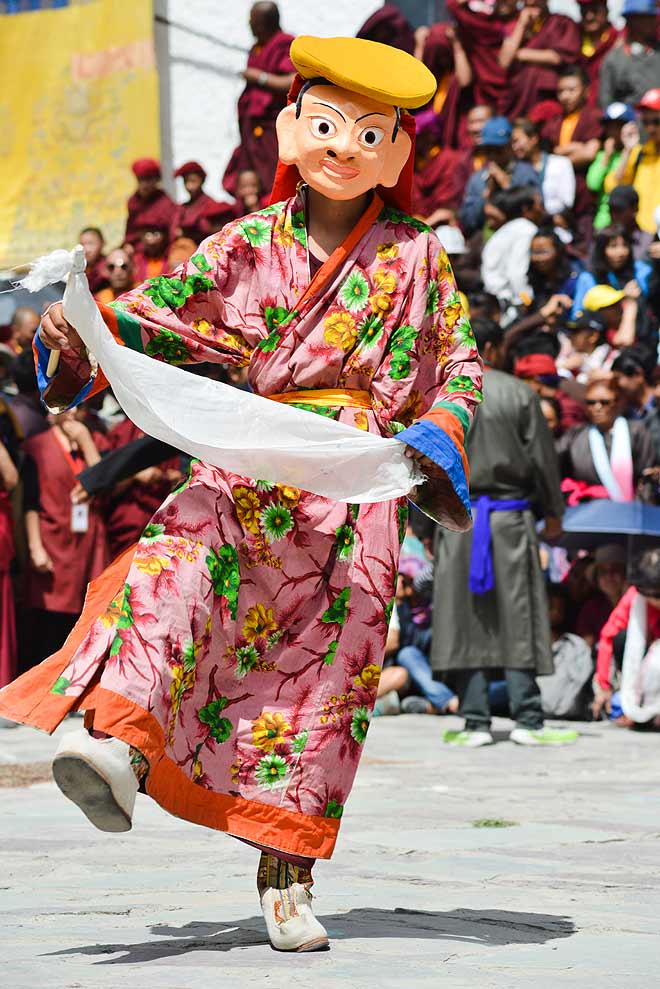 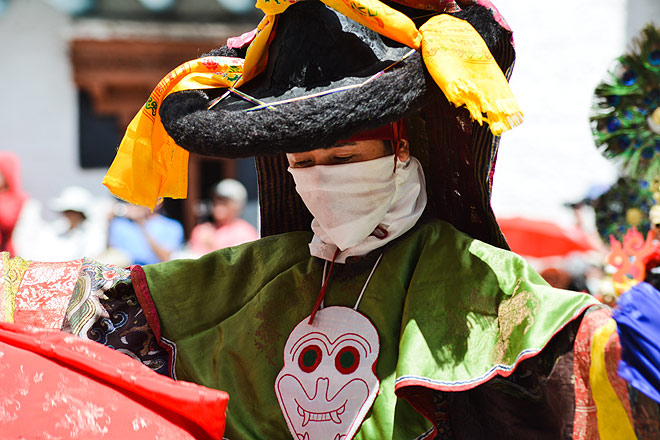 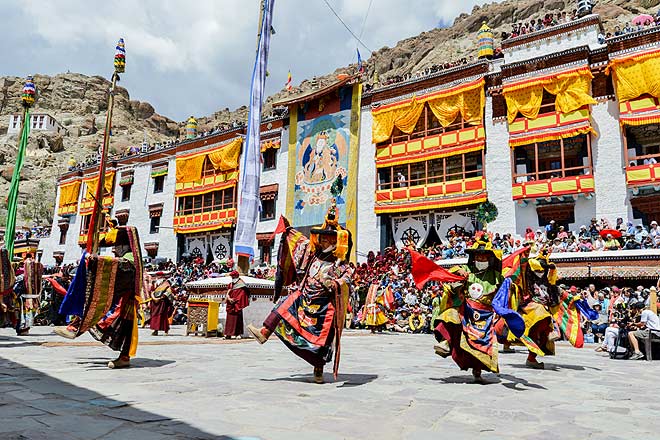 Considered to be the personification of 'krodha' or angry deities, the performers dance around the main flagstaff 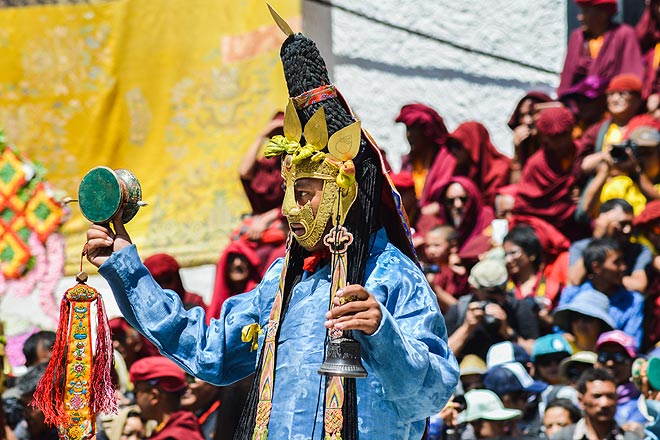 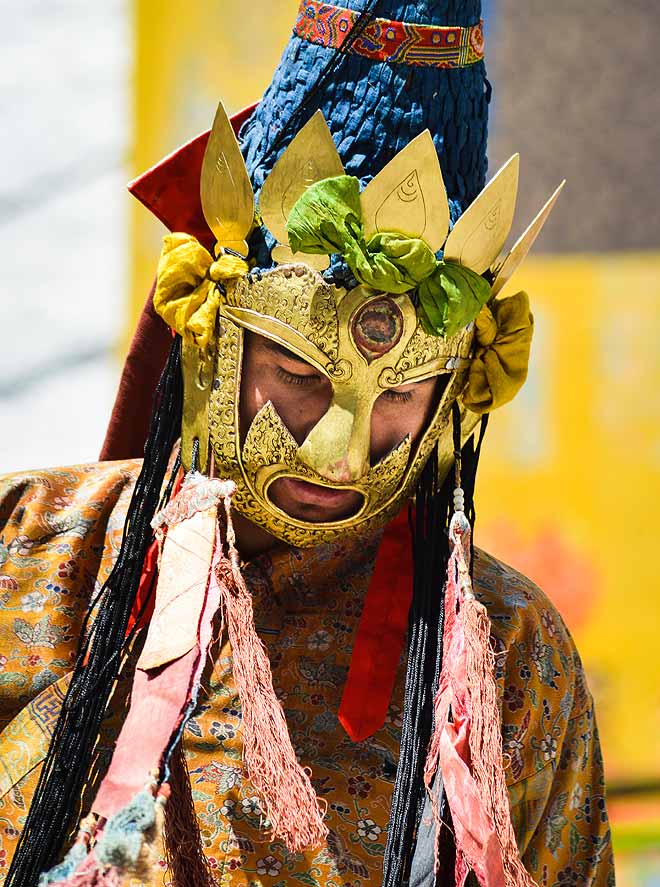 The group of dakinis is led by the divine dakini, Vajrayogini 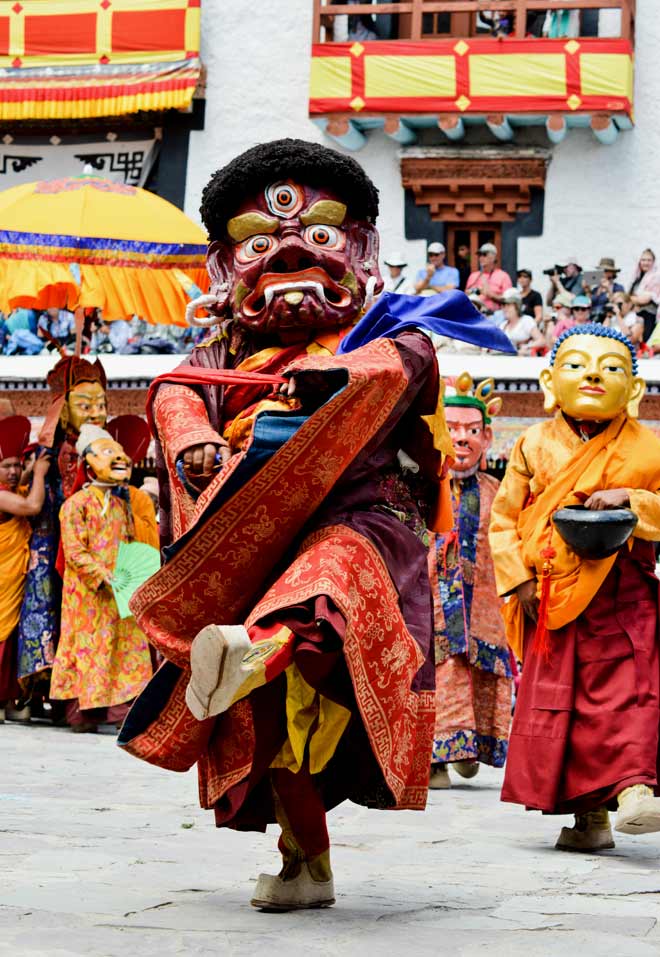 Eight manifestations of Guru Padmasambhava dance at the festival, here led by the ferocious Vajralila 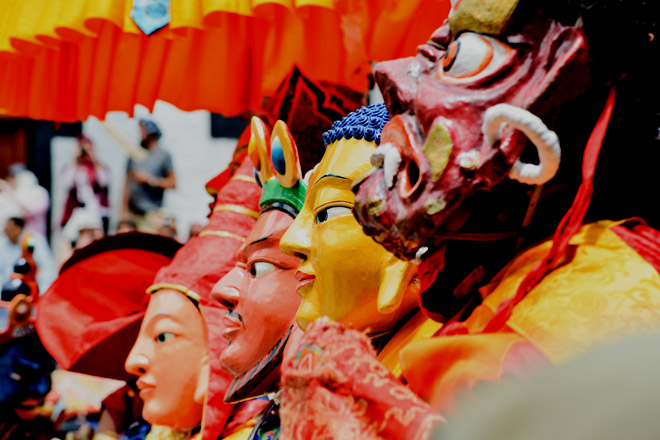 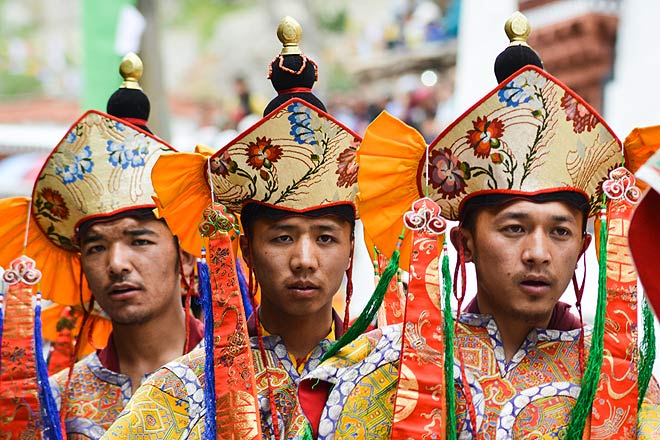 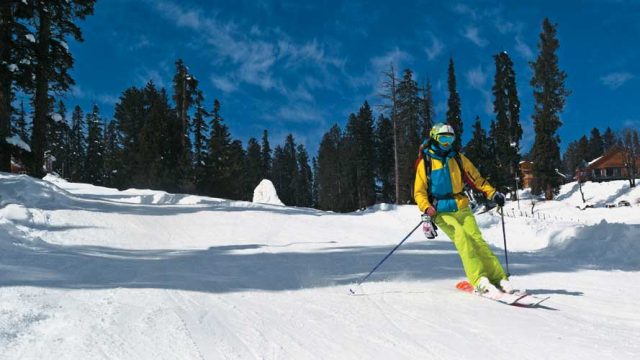 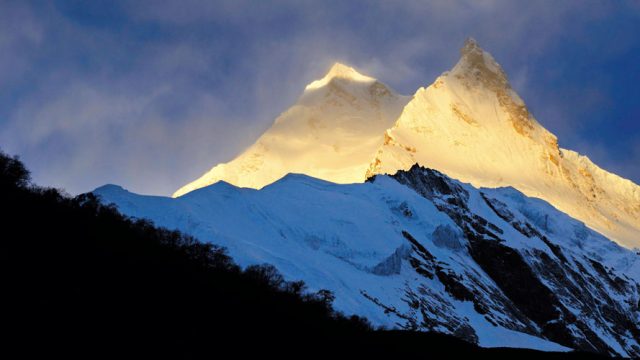 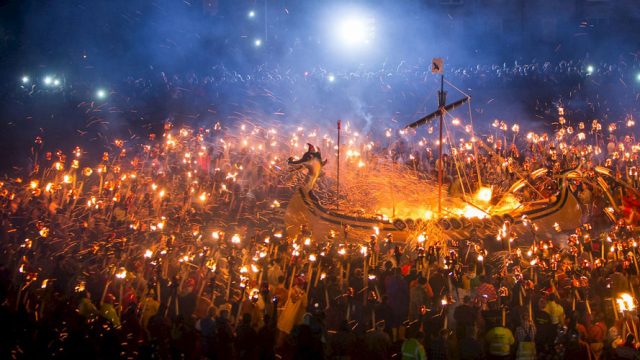