X And The City

"Look the part" was the counsel from experienced friends when they learnt that I was going porn-hunting - seedy shopping at Palika - in the interests of journalism. 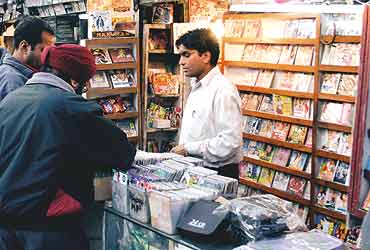 I descend into the labyrinthine underworld of Palika Bazaar wearing my shabbiest sweatshirt and jeans, face covered by a three-day stubble. "Look the part" was the counsel from experienced friends when they learnt that I was going porn-hunting in the interests of journalism. I practise the upward curl on my lips; it makes me look both knowing and lecherous—I think.

No sooner have I entered the atrium on the upper floor of the famous underground bazaar than a young shop assistant approaches. "Seedies?" he enquires, this being how both VCDs and DVDs are referred to here. "Double aur triple hai?" I retort (the "X" is unnecessary in this setting) in what is intended to be a throwaway tone.

To all intents and purposes the shop was closed, but "double aur triple hai" would have knocked "Open Sesame" out cold in a fight: the shutters are yanked one-third of the way up, I’m escorted inside and back down they go again. The owner is incongruously avuncular, he wears thick glasses, has a warm smile and this starts to feel awkward; it’s like buying condoms from the neighbourhood chemist you’ve known since you were a child. But then he opens his mouth to speak. "You want combination, single, Asian, schoolgirl, kitty aunties, frontside, backside, oral, multiple? All varieties available. Full one-and-a-half hour. Rs 150 only." (Kitty aunties?)

Dozens of discs are on display, the images on their covers leave nothing to the imagination. This isn’t cutesy Playmate of the Year stuff, it’s distressingly biological. They get new titles every day, I’m told, "the best from around the world, over 500 to choose from". I excuse myself, say I’ll look at other options and return. The same routine is repeated at a dozen other shops, with minor variations in price.

Eventually I head downstairs to my favourite shop for regular DVD purchases, but the last half-hour has left my tongue on autopilot. "Double aur triple... I mean, world cinema ke titles dikhaana," I say, as the guy behind the counter starts to shrink back. Like a lavish meal set before a starving man, the films are spread out—Bresson sharing space with Fellini, silent classics like Griffith’s Birth of a Nation sitting cheek by jowl with modern Japanese anime; it isn’t uncommon to hear impassioned discussions about Wong Kar-Wai or the French nouvelle vague in this place.

This is one of the many shops in Palika that sell "original copies" — near-perfect prints for a mere Rs 200. The special features on some DVDs don’t work but that’s a small price to pay for access to such a variety of titles—never has the movie buff here had such choice, not even at the peak of the video cassette era. The more you frequent a shop, the more latitude you get, starting with a DVD-case for each disc you buy. (By now I routinely get invited into the loft above the shop to peruse the catalogue unhurried.)

Cries of "seedy?" rend the air as I clamber towards daylight, my hands full of bags in which Fritz Lang and Satyajit Ray nestle alongside "combination triple ex-es". Palika may not be on the level but it’s a great leveller. From serious film buffs to kitty-aunty admirers, we’ve all been here.