International Some Countries Should Get Rid Of Cold-War Mentality And Stop Forming Small Cliques: China On Quad Summit

China’s comments come just days after the leaders of the Quad nations--US, Japan, Australia and India, vowed to strive for an Indo-Pacific region that is free, open and inclusive. 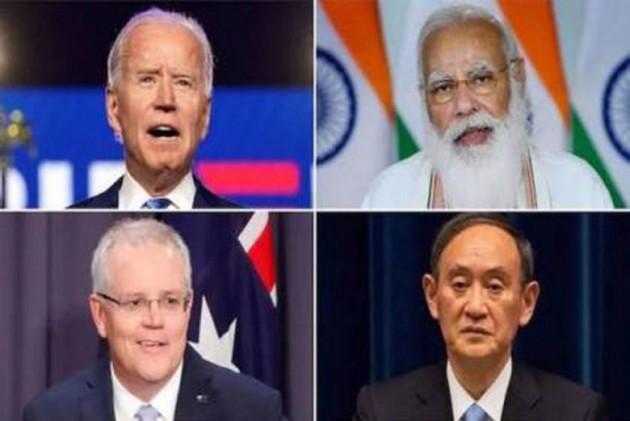 In its first official reaction to the Quad summit held last week, China on Monday said no "small cliques" should be formed.

The Quad is a coalition of four democracies-- US, Japan, Australia and India. Many political thinkers claim, the coalition at its core, is the first attempt by the four nations to push-back against China’s rise in the Indo-Pacific region.

"Certain countries should shake off their Cold-War mentality and ideological prejudice, refrain from forming closed and exclusive small circles, and do more things that are conducive to solidarity and cooperation among regional countries and regional peace and stability,” Chinese Foreign Ministry spokesman Zhao Lijian told a media briefing here.

He made the comments while answering a question about Quad summit and the reported remarks by US National Secretary Advisor Jake Sullivan that the four leaders discussed the challenge posed by China and said all four believed the democracies could help compete with autocracy.

"For quite some time, certain countries have been so keen to exaggerate and hype up the so-called ‘China threat’ to sow discord among regional countries, especially to disrupt their relations with China," Zhao said.

"However, their actions, running counter to the trend of the times of peace, development and cooperation and the common aspirations of the countries and peoples in the region, will not be welcomed or succeed," he said.

"Exchanges and cooperation between countries should help expand mutual understanding and trust, instead of targeting or harming the interests of third parties," he added.

Zhao also reacted angrily to reported remarks by US Defence Secretary Lloyd J. Austin that the goal of the US and its key allies is to ensure that they have the capabilities, operational plans and concepts to offer credible deterrence to China or anybody else who wants to take on America.

"In the era of globalization, forming enclosed small cliques with ideology as the yardstick is the sure way to destroy the international order and after all, is unpopular and will end in total failure," Zhao said.

"The United States should treat China and China-US relations in a right mentality and in an objective and rational manner, stop interfering in China's internal affairs, and work with China to focus on cooperation, manage differences, and place China-US relations back on the track of healthy and stable development,” he said.

Zhao said China has always been a builder of world peace, a contributor to global development, and a defender of the international order.

"China's development means better protection for world peace, as it represents opportunities for the world, not challenges. China has always firmly upheld the UN-centered international system and the international order we champion is the one based on international law, not the one defined by individual countries to maintain their hegemony," he added.

Austin will visit India this week along with Japan and South Korea, in the first overseas trip of a senior member of the new Biden Administration.

This is for the first time that India has been included in the itinerary in the first overseas trip of a US Defence Secretary.