The seven-day rolling average of newly reported infections in the U.S. has risen from about 176,000 a day just before Thanksgiving to more than 215,000 a day. 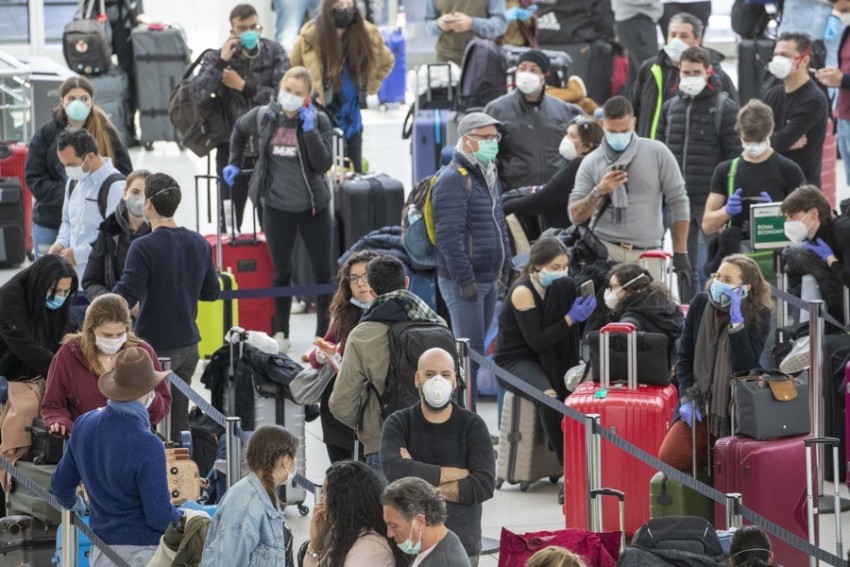 Passengers wear face masks to fend off coronavirus at JFK airport in New York.
AP Photo
Associated Press (AP) 2020-12-21T08:22:03+05:30 Over 1 Million People Screened On US Airport Despite Holiday Travel Warnings In US

More than 1 million people have passed through US airport security checkpoints in each of the past two days in a sign that public health pleas to avoid holiday travel are being ignored, despite an alarming surge in Covid-19 cases.

It marks the first time US airports have screened more than 1 million passengers since Nov. 29. That came at the end of a Thanksgiving weekend that saw far more travel around the country than had been hoped as the weather turned colder and Covid-19 cases were already spiking again.

Now, hospitals in many areas are being overwhelmed amid the largest outbreak of Covid-19 in the U.S. since March, when most Americans were ordered to stay home and avoid interactions with other households.

The seven-day rolling average of newly reported infections in the U.S. has risen from about 176,000 a day just before Thanksgiving to more than 215,000 a day. It's too early to calculate how much of that increase is due to travel and gatherings over Thanksgiving, but experts believe they are a factor.

Although lockdowns are no longer in effect in many parts of the country, stay-at-home orders have returned in some areas in effort to contain the virus. Nearly 99% of California's population of roughly 40 million people, for instance, has been told to remain at home except for essential work, shopping and exercise.

The Centers for Disease Control and Prevention has issued an advisory declaring “postponing travel and staying home is the best way to protect yourself and others from Covid-19.” Nevertheless, about 1.07 million people passed through the security checkpoints at U.S. airports on Friday and again on Saturday, according to the Transportation Security Administration. Saturday's volume was down 57% from the same time last year, the smallest year-over-year decline in daily traffic at U.S. airports since Nov. 22 as people began their Thanksgiving getaways.

If that early trend continues, U.S. public health officials fear it will lead to more superspreader events as people unwittingly transmit the virus to family and friends while gathering indoors for holiday celebrations. Health officials note the upcoming holiday period from Christmas to New Year's Day covers a longer timespan than the Thanksgiving break.

Even more travel is expected as Christmas draws closer. AAA projects about 85 million people will travel between Dec. 23 and Jan. 3, most of them by car. That would be a drop of nearly one-third from a year ago, but still a massive movement of people in the middle of a pandemic.

People Over 75, Essential Workers Next In Line For Covid Vaccine In US: Experts