Mike Pompeo, US Defence Secretary Esper To Visit India For 2+2 Talks On October 27

'India will be the most consequential partner for us, in the Indo Pacific for sure in this century,' Esper said in response to a question during Atlantic Council's webinar 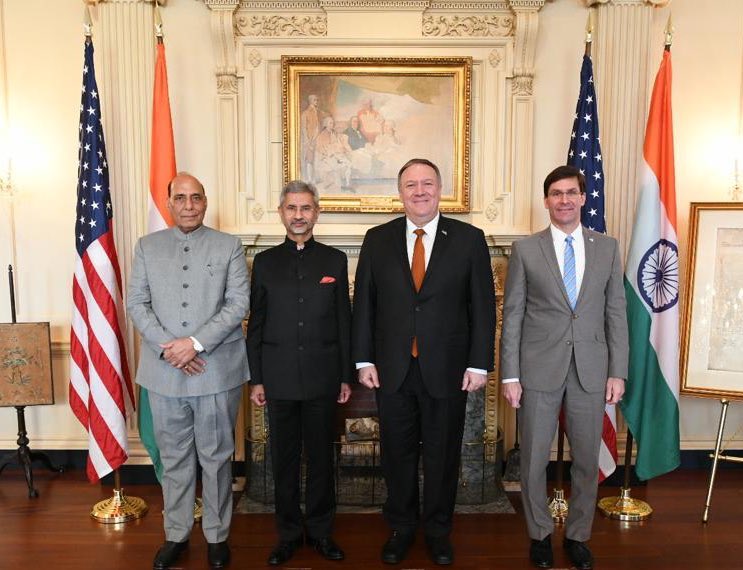 Mike Pompeo and Mark Esper will be travelling to New Delhi next week for the 2+2 Ministerial with their respective Indian counterparts, Rajnath Singh and S Jaishankar
Twitter/MEA
PTI 2020-10-21T09:57:28+05:30 Mike Pompeo, US Defence Secretary Esper To Visit India For 2+2 Talks On October 27

India will be the most consequential partner for us in the Indo-Pacific this century, US Defence Secretary Mark Esper said Tuesday ahead of the 2+2 Ministerial Dialogue between the two countries next week.

Esper on Tuesday told a Washington audience that he and the Secretary of State Mike Pompeo would be travelling to New Delhi next week for the 2+2 Ministerial with their respective Indian counterparts Defence Minister Rajnath Singh and External Affairs Minister S Jaishankar.

The exact dates of the ministerial have not been officially announced yet.

"Secretary Pompeo and I will be there next week. It's our second 2+2 with the Indians, the third ever for the United States and India. And it's very important. India will well be the most consequential partner for us, I think, in the Indo Pacific for sure in this century," Esper said in response to a question during a webinar organized by The Atlantic Council think-tank.

To another query, he said, "India is the world's largest democracy, a very capable country, very talented people. And they face of every day with the Chinese aggression in the Himalayas specifically along that Line of Actual Control."

"So, like so many other countries in that region, I've spoken with them (Indians). I've travelled from Mongolia all the way down south to New Zealand and Australia, from as far as Thailand to Palau in the Pacific island countries. They'll recognize what China is doing," he said, adding that in some cases, it's very overt, and in many more cases it's very opaque, what they're doing.

"But they are putting political pressure, diplomatic pressure, and in some cases like India, military pressure on countries to bend to their way. We just can't put up with that. We need all countries to follow those international rules-based order, to follow the norms that have served us so well," Esper said.

The issue is not about China's rise, it's all about how they rise, said the Defense Secretary.

"That's what we talk about in all these forums. Last week we had a Five Eyes Forum, right, the US, New Zealand, UK, Canada, and UK. Anyways, we have the Five Eyes Forum and we talked about the challenges in the Indo-Pacific and how do we cooperate together, how do we confront these challenges to sovereignty, to the international rules-based order, to freedom of navigation,” he said.

The Indo-Pacific is a biogeographic region, comprising the Indian Ocean and the western and central Pacific Ocean, including the South China Sea. China claims nearly all of the South China Sea, though Taiwan, the Philippines, Brunei, Malaysia and Vietnam claim parts of it.

"So, you see a lot more closer collaboration come out, and this will be reflected in our meetings next week in New Delhi as well when we travel there," Esper said, adding that there are a number of things that the US has been discussing with the Indians for some time.

"We've made good progress on a number of them, but we'll release information on that when it's appropriate," Esper said.

Formed in 2018, the 2+2 Ministerial Dialogue meetings reflect the two country's ever increasing convergence on the strategic issues.

"Last year, we conducted our first ever tri-service military exercise, Tiger Triumph, with India. And in July, the USS Nimitz conducted a combined exercise with the Indian Navy as it transited the Indian Ocean. We also held our first-ever US-India defense cyber dialogue in September as we expand our collaboration into new domains. Together, these efforts will strengthen what may become one of the most consequential partnerships of the 21st century," Esper said.