Authorities have locked down 21 residential estates in Fengtai and the northern district of Haidian, which is also home to a big food market. 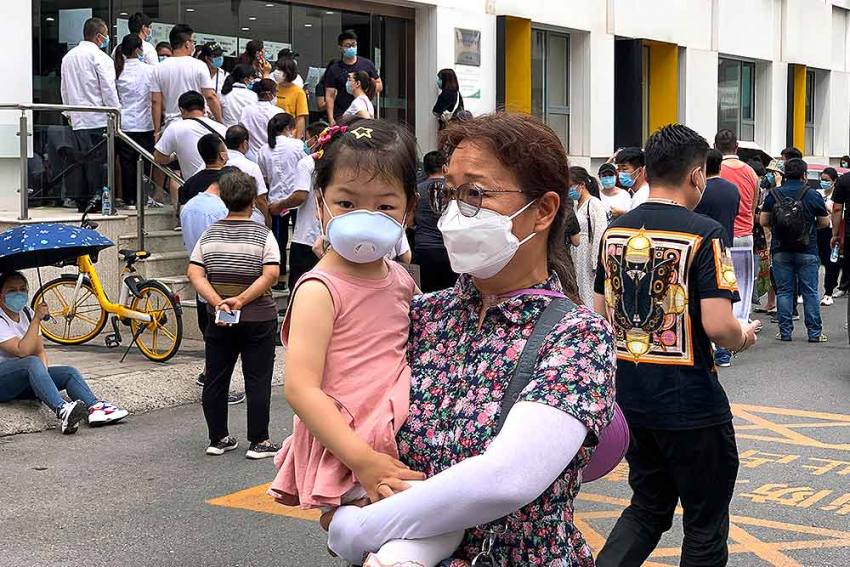 A woman and a child wearing protective face masks to help curb the spread of the new coronavirus walk by people lining up outside a health center to get the nucleic acid test in Beijing.
AP Photo
PTI 2020-06-16T12:36:18+05:30 'Extremely Severe Situation' In Beijing As Covid-19 Cases Cross 100, Mass Testing Underway 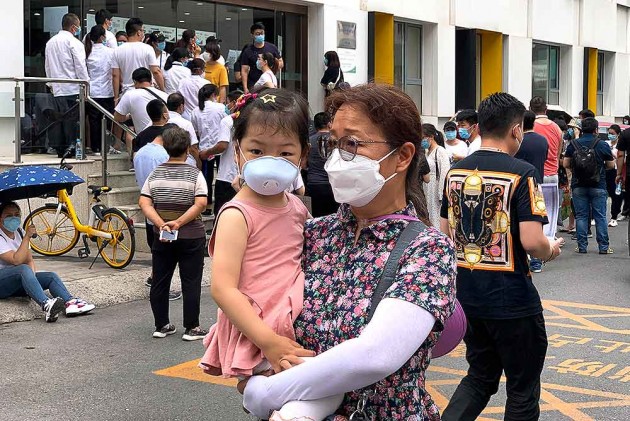 The COVID-19 cases in Beijing have jumped to 106, a senior city official said on Tuesday, warning that the situation is "extremely severe" in China's capital where the authorities have mounted massive containment measures including mass testing of about 90,000 people and lockdown around the wholesale market which reported the new infections.

Twenty-seven new cases were reported in the last 22 hours, Beijing city spokesman Xu Hejian said, adding that strict measures have been implemented to stem the spread of the deadly virus.

Since the outbreak at the Xinfadi wholesale market in the last five days, the total confirmed new cases have reached 106, he said.

The official, who is also deputy minister of the Municipal Party Committee Propaganda Department, said the epidemic situation in Beijing remained "extremely severe".

"This is our top priority. We have to strictly implement all the measures and seize every minute," he said.

Earlier, China's National Health Commission (NHC) reported 46 new coronavirus cases including 27 in Beijing, which is currently testing thousands of people and lockdown many residential areas following a sudden spurt of a cluster of cases from a local wholesale market.

The NHC on Tuesday reported 40 new confirmed COVID-19 cases on Monday of which 27 were reported in Beijing, four in Hebei Province, and one in Sichuan Province.

Officials said Beijing was facing "explosive outbreak" of the coronavirus.

Wu Zunyou, chief epidemiologist with the Chinese Centre for Disease Control and Prevention, told the Communist Party mouthpiece People's Daily on Monday afternoon that the situation was very serious.

"Beijing is facing explosive and concentrated outbreaks even though the national epidemic has basically been blocked. The fact that it happened in Xinfadi, a large wholesale market, is a challenge in itself as we try to carry out epidemiological investigations," Wu said.

Authorities have locked down 21 residential estates in Fengtai and the northern district of Haidian, which is also home to a big food market. Access to the areas is strictly controlled and mass coronavirus testing is underway.

"The resurgence of cases sounded the alarm to us, with Xinfadi being a large food market that supplies a large proportion of Beijing's fresh vegetables, recording a high level of daily traffic, which is part of the reason behind such a severe situation," Wang Peiyu, deputy head of Peking University's School of Public Health said.

In a bid to stem the spread of the contagion, the authorities in Beijing started conducting the nucleic acid tests on 90,000 people. About two lakh people were reported to have visited the Xinfadi wholesale market since May 30. Also several residential areas around the market, which supplies 90 per cent of vegetables and meat products, were placed under strict lockdown.

Zhang Yuelin was also ordered to be removed from the post of general manager of the Xinfadi wholesale market, the official media reported.

Also, the official media here revived the debate about the origin of the coronavirus after Yang Peng, a researcher from Beijing CDC, told state-run CCTV that it has been preliminarily determined that the virus found on the samples from the market is related to strains China has seen from imported cases.

The genome sequencing showed that the coronavirus came from Europe.

Thousands of overseas Chinese are currently returning with a number of them testing positive for the coronavirus.

The World Health Organisation (WHO), which was blamed for supporting China since the coronavirus outbreak in Wuhan in December last, however, said the strain of the virus circulating at the Xinfadi market is not new.

Gene sequencing for the first case was reported as belonging to the European strain, which has been circulating in China and other countries, the WHO statement said.

The WHO also said it sought a report from China on the new cluster of cases in Beijing while its officials have not yet visited the area.

"We have asked China for the genetic sequencing and to receive new data on the epidemic as the investigation unfolds; and our counterparts are committed to continuing to provide such data. WHO is following up with Chinese officials for further detail," a WHO statement said.

The NHC said as of Monday, the overall confirmed cases on the mainland had reached 83,221, including 210 patients who were still being treated, with five in severe condition.

Altogether 78,377 people have been discharged after recovery and 4,634 people have died of the disease, the commission said.