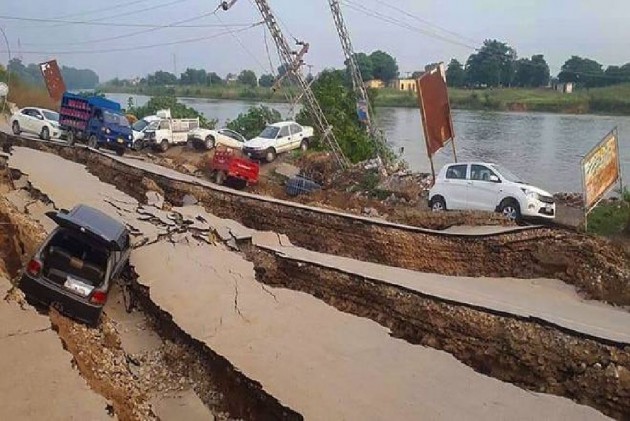 The death toll mounted to 26 in a powerful 5.8-magnitude earthquake that jolted Pakistan-occupied Kashmir and several cities. At least 300 people were injured.

The epicentre of the earthquake was near New Mirpur in Pakistan-occupied Kashmir (PoK), which was severely affected by the quake. The depth of the quake, which occurred at 4.02 pm (local time), was at 10 kilometres, according to the US Geological Survey.

According to the Home Department, 26 people were killed and over 300 injured in Mirpur and surrounding areas due to the powerful quake.

Pakistan Meteorological Department's earthquake centre said the 5.8-magnitude earthquake was located near the mountainous city of Jehlum in Punjab province. However, Minister for Science Fawad Chaudhry said that the intensity of the quake was 7.1.

Some houses collapsed in Mirpur following the earthquake, Deputy Commissioner Raja Qaiser said. Parts of a mosque also collapsed in the area. Emergency has been declared in hospitals across PoK.

TV channels showed the footage of heavily damaged roads in Mirpur, with many vehicles overturned. Several cars fell into the deep cracks on the roads. The building of the state-run Broadcasting House in Mirpur was badly damaged.

The quake was powerful and created panic as people ran out of the building, eyewitnesses said.

Pakistan Prime Minister Imran Khan, who is in New York to attend the UN General Assembly session, expressed grief over the loss of human life. He directed all the concerned departments to provide immediate assistance to the quake-hit areas. President Arif Alvi also expressed deep sorrow over the loss of lives.

Pakistan Army chief General Qamar Javed Bajwa directed "immediate rescue operation in aid of civil administration" for victims of the earthquake in PoK. Army troops with aviation and medical support teams have been dispatched, the media wing of the army tweeted.

Lt Gen Muhammad Afzal, chairman of the National Disaster Management Authority, said that most of the damage was done in Mirpur and Jhelum.

He said all departments, including NDMA, Pakistan Army, and State Disaster Management have started rescue operation in quake-affected areas.

Afzal said Mangla to Jatalan road and three bridges were damaged in the quake. "We have enough resources to cope with the disaster," he said.

He said the exact magnitude of disaster will be known by Wednesday.

However, the Upper Jhelum canal was damaged and water inundated various villages. The breach in the Upper Jhelum Canal was fixed due to the timely intervention of officials, PoK Information Minister Mushtaq Minhas said.

Meanwhile, Prime Minister Narendra Modi expressed grief at the loss of lives and damage to property due to the earthquake.