The J&K chief minister says that for the first time in 57 years, the state secretariat would be open for eight hours instead of the seven hours earlier, as he holds forth on the other issues facing the state. 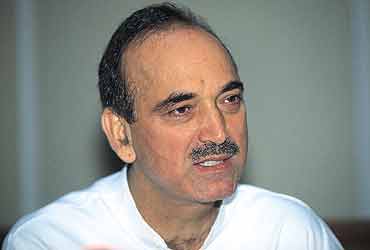 Listener from Jammu : Sir, this is for the first time in the history of the state that we have a chief minister from the Jammu region - would things change for us?

Ghulam Nabi Azad : My friend, let me make it clear that changes in the state would be seen soon. I do not believe in talking much, I work for sixteen hours everyday and expect my colleagues and state officials also to work with the same zeal for the state. From now on, for the first time in 57 years, the state secretariat would be open for eight hours instead of the seven hours earlier. Ministers and officials would review the developmental work in the state ranging from the basic infrastructural issues like building of roads, bridges, buildings and future developmental planning from nine in the morning to three in the afternoon. For the next two hours, all of us would meet the general public. There is no need for chaotic rush in the secretariat from the morning itself. My friend, people of all regions of the state would see the difference.

Nagendar Sharma, BBC Hindi Radio: You are talking of routine administrative changes, but how would you deal with the problem of terrorism which the state which has been facing for decades now?

Ghulam Nabi Azad : Terrorism is an international problem. So far as the problem of terrorism in Jammu and Kashmir is concerned, it has historical reasons and many other factors are also involved. It is not the people of Kashmir, but external forces with world-wide networks who have been playing a dangerous game here. We should not forget that ours is a border state and the neighbouring country has been creating trouble and difficulties here since 1947. Successive state governments tried to root out the menace, but there are certain forces, who, with the help of some foreign countries, want to keep militancy alive. Our government is determined to fight militancy to the finish.

Listener from Oman : Mr Azad, at a time when India and Pakistan are engaged in a peace process, though at a slow pace, because of the Kashmir issue, as a chief minister how do you see this issue ?

Ghulam Nabi Azad : Pakistan should not merely talk to India for the consumption of the international community, but should come forward with a clear heart and sincerity of purpose. So far as the government and people of India are concerned, we are waiting to greet and welcome the Pakistani brothers and sisters with open arms, but they need to show sincerity in relations with us. We are now moving in the direction of having friendly relations with all neighbouring countries, and we hope that some of the neighbouring countries would change their policies in the coming days, as people of the region want peace and development. People of both countries deserve credit for pressuring the governments to forge friendly ties. I hope that the government of Pakistan would yield to public pressure there and have good friendly relations with India

Nagendar Sharma, BBC Hindi Radio: What in your views should be the Indian priority while taking to Pakistan?

Ghulam Nabi Azad : Our priorities for friendly relations with Pakistan are very clear. Whatever talks take place between two countries should be held with utmost sincerity. Talks aimed at publicity and meant only for the consumption of international community are meaningless. The tension between India and Pakistan since last 57 years has only resulted in bringing a bad name to both countries internationally. We are moving forward and let us remember the saying 'better late than never'. There should be no reason for disappointment, as complex problems require patience and consistent efforts for resolution

Listener from Baramulla : Mr Azad, do the governments of India and Jammu & Kashmir trust Pakistan and think it would be a friendly neighbour of India?

Ghulam Nabi Azad : Well, there is an overwhelming feeling of friendship between the people of India and Pakistan. It is their pressure on governments that initiated the peace process. Concrete progress has taken place between both the countries during the past year and a half in building a friendly atmosphere. Now what is important is that Pakistan should put an end to governmental hostility with India forever. I appeal to the government of Pakistan that people of both countries love each other dearly. Therefore Pakistan should put an end to this hostility with India forever. Pakistan government should yield to the demand of its people of friendship, which would usher in an era of prosperity in the South Asian region.

Nagendar Sharma, BBC Hindi Radio: Mr Azad, immediately after taking oath, you had said you would like to carry along all sections of the state, but separatists seem to be maintaining a distance with both centre and the state government ever since UPA government took over in Delhi. Isn’t it a major failure ?

Ghulam Nabi Azad : It has only been one month and a half since Prime Minister Manmohan Singh met the Hurriyat leaders. So far as the Jammu and Kashmir government is concerned, we would act as facilitators for talks between the separatists and the Centre. We would not put any hurdles in their (separatists') talks with the Centre. We would like more and more parties to join the mainstream and in this context, my endeavour would be to do all that is possible in facilitating their talks with the Prime Minister. The state government would facilitate all talks. I would try to bring all parties and groups, who would be interested in talking to government of India and joining the mainstream, to the negotiating table. Nobody would face any problem from the side of the state government. There are leaders other than Hurriyat also whom we would like to see meeting the Prime Minister.

Listener from Delhi : Mr Azad, despite much hype on opening of relief points along the Line of Control between India and Pakistan, the reality is that out of five identified points, these are being opened one by one. Why this lack of trust ?

Ghulam Nabi Azad : I do not attach much importance to the fact whether the relief points are being opened on 7th or 9th November. What is important is that relief distribution work has begun effectively and I think between 7th and 12th November, we would have relief points at three to four places along the LoC, which shows progress is being made. From an atmosphere of traditional hostility, we are now moving towards friendship. When two countries have respective positions at international fora, it takes time to come back to original friendly atmosphere. Concrete progress has taken place between the two countries in building a friendly atmosphere. Definite progress is there. It may be slow, but things are moving forward and there is no reason for disappointment.

Nagendar Sharma, BBC Hindi Radio: Mr Azad, there is a feeling in the state that Congress party views Kashmir from a Delhi angle, and is mainly responsible for many problems faced by the state. With a congress chief minister back in the state, would you be able to change the impression about Congress in the state?

Ghulam Nabi Azad : You are talking in the past and about the past. Congress today is the most pro-Kashmiri party. In fact from the days of Nehru himself, Congress has enjoyed a special rapport with the people of the state. Since Sonia Gandhi took over as chief of the Congress party, about seven years back, she has been the first leader to reach the state whenever anything has happened here. Even regional parties have been slow in reaching the spot, and this has happened many times. In some cases, the time difference between Sonia Gandhi’s reaching the spot and those of Kashmir based regional parties has been many days. The money for development of the state comes from Delhi, which was being provided by the Congress-led central government till now and would continue to be so. Therefore Congress party is the one which has cared about the people of the state and this would increase in the coming days.

Listener from Uri (J&K) : Sir, you had visited Uri immediately after the quake and promised all possible relief for the victims, but relief distribution has not been up to the mark, especially state administration has been found wanting in this work, only the armed forces have done a good job. Is anything better expected in coming days ?

Ghulam Nabi Azad : Armed forces have done a commendable job in quake relief. Majority of quake-hit areas were along the LoC, where armed forces were already present, and they were better organised in such areas than civil administration to carry out the relief work. I was in-charge of relief operations from the Centre till I was a minister there. It was ensured that all relief material - be they blankets, tents, food material or water - was rushed to the state. It was the duty of state officials to have made available all the relief material to all the victims. However, if there are complaints against state officials I would look into them.

Ghulam Nabi Azad : In all meetings I had instructed the officials to speed up the distribution. I had also said that no victim or area should be left out of relief work due to political consideration. However, if anyone feels they were ignored because of political affiliations, or any other reason, they should write to my Jammu address, and I would ensure no victim is left out.

Listener from Jammu : Sir, in the name of the fear of militancy, bureaucracy in the state has almost stopped working and are immensely corrupt, would you pay attention to this and change things?

Ghulam Nabi Azad : Let me make it very clear that corruption and bribery would not be tolerated. I want to make it clear to everyone in the state, including my ministerial colleagues that there would be no tolerance on corruption. Another thing which I would like to make very clear is that regional, religious and casteist considerations would not be allowed to hamper developmental works in the state. No favouritism on these lines would be acceptable in the state. I would take strict action against anyone, whosoever he might, be if such complaints are brought to my notice.