It was a big-bang of a dream start thanks to Uthappa (70 in 41 balls) but India lost the plot in the middle and there was no miraculous bowling comeback to prevent the series becoming wide open at 2-1. 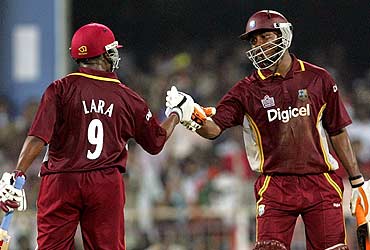 India paid the price for tinkering with the winning combination and some casual batting performance as the West Indies recorded a comfortable three-wicket victory in the third one-dayer to keep themselves afloat in the four-match series today.

After restricting India to 268 in 48 overs on a good batting track, the visitors overhauled the target with 38 balls to spare in the day-night clash at M.A. Chidambaram stadium, reducing the hosts' lead to 2-1.

Marlon Samuels struck a cavalier 98 from 95 balls while skipper Brian Lara made a typically scintillating 83 to guide the Caribbeans home.

Lara, back in the side after missing the previous game with a knee injury, and Samuels put on a match-winning partnership of 127 runs for the fourth wicket.

India made as many as five changes to the team that won the previous match, in a bid to try out new players keeping the World Cup in mind but the move backfired with only Robin Uthappa coming good.

India's total could have been better after being placed at 232 for 3 in the 35th over.

Uthappa smashed a hurricane 70 and his tempo was sustained by Sachin Tendulkar and skipper Rahul Dravid who hit sparkling half-centuries.

Tendulkar answered his critics with an orthodox 60 while Dravid made an enterprising 57 but their dismissals within three runs proved to be a turning point.

As it were, India could add only 36 runs in the next 13 overs while losing seven wickets. More criminal was they failed to use their full quota of 50 overs.

Dwayne Bravo, after conceding 19 runs in the first over, returned with 4-39 while Chris Gayle (2-57) and Jerome Taylor (2-45) benefitted from the Indians' hara-kiri.

Uthappa provided the Indians a flying start with his 41-ball knock. The Karnataka batsman plundered 11 fours and two sixes while adding 88 runs for the second wicket Suresh Raina (23). 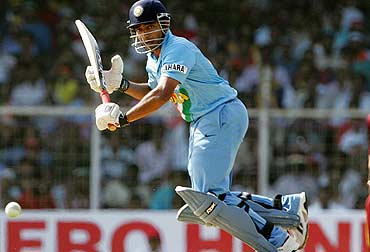 The right-hander, who reached his fifty off only 32 balls, fell while trying to loft Chris Gayle and ended up top edging him to Lendl Simmons at long off.

Tendulkar, who has been through a lean patch, played a smart innings in sustaining the momentum provided by Uthappa.

The Mumbaikar eschewed ambitious shots - his innings contained only two fours - and focussed on picking the gaps.

With the ball coming on nicely, Tendulkar showed his touch against the West Indian seamers. The stand out was a typical push-drive to the long on fence off Darren Powell.

After reaching fifty off 52 balls, Tendulkar fell to a brilliant catch by Runako Morton who leaped to hold on to a mistimed drive at mid on.

Dravid was more open in his shot-making than his senior partner. He struck six fours in his 67-ball innings, his strokes balancing Tendulkar's calmness at the other end.

Ajit Agarkar gave the Indians a promising by having Gayle and Morton in his first 10 balls.

The right-arm seamer had Gayle for the second time off successive delivery, having dismissed the left-hander at Cuttack.

The tall Jamaican was out in similar fashion as in the previous game, leg before to an in-swinger, off the first ball of the innings.

Morton then chased a wide delivery in Agarkar's next over to be caught behind for one.

Samuels and Devon Smith (33) then repaired the damage with a 65-run stand before the latter succumbed to a reflex catch by Dravid at first slip off Anil Kumble.

But the Indians ran into an impregnable in the combination of Lara and Samuels who found the true Chepauk pitch very much to their liking.

While Samuels flexed his muscles in spanking the home bowlers, Lara displayed his artistry, particularly against the slow bowlers.

Samuels reached his fifty off 42 balls with nine fours. He hit three more fours before edging Agarkar to Karthik.