Windies Kept On A Leash 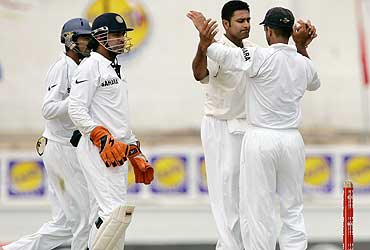 India kept themselves in the hunt by checking the mercurial West Indian batsmen running away to a mammoth first innings lead in the second Test on Saturday.

The Indian bowlers weathered an early assault by opener Chris Gayle (72) and then a disdainful half-century by Dwayne Bravo (68) to rein in the hosts to 318 to six at close on the second day at the Antigua Recreation Ground.

The West Indies had a 77-run lead and would be hoping to stretch it further with the remaining four wickets, but the damage could have been much more for the Indians if not for some gutsy performance by their bowlers.

The 'Old Fox' Anil Kumble (2-85) responded to the tag of bowling spearhead by giving two crucial breakthroughs while Munaf Patel (2-60) was impressive among the seamers.

But it was the twin dismissals of Shivnarine Chanderpaul and Bravo in the final hour of play by Virender Sehwag (2-32) that brought the West Indies run machine to a screeching halt.

Gayle waded into the hapless Indian attack, smashing 13 fours and a six in his 91-ball knock.

The hosts were flying high at 137 for one at one stage with the left-handed Gayle and Ramnaresh Sarwarn (58) featuring in a 119-run stand before Kumble had the former caught at slip for the first major breakthrough.

The 35-year old leggie struck again when he had Sarwan leg before first ball after tea.

The Caribbean innings picked up momentum again as Bravo collared the Indian attack with his enterprising strokemaking before Sehwag had him stumped.

Earlier, resuming at 235 for 9, India were all out when Fidel Edwards spreadeagled the stumps of Patel with a straighter one. Sreesanth remained unbeaten on 29.

West Indies were only 18 runs in the first four overs but thereafter the floodgates were opened and runs came in spurts.

Sreesanth's fourth over was a signal to Gayle's intention as the left-hander smashed 14 runs including a massive six which cleared the ground.

A flustered Sreesanth then bowled short and wide and was promptly punished for two more fours.

Test debutant VRV Singh was hit for three fours in his first over by Sarwan but there were two close appeals for leg-before wicket against the right-hander.

Gayle then hit a four each off Patel and Singh to move closer to his half-century.

The introduction of Kumble didn't seem to make any difference as the left-hander drove him elegantly on either side of the wicket to pick two more fours.

His partner Sarwan was serene at the other end and collected his runs in a calm manner as 119 runs were raised for the second wicket from 141 balls.

It was Kumble though who broke the stand when he took the edge of Gayle's bat and was nicely caught by Rahul Dravid in the lone slip.

Lara made it an all-round bad day for Sreesanth whom he first drove him for a four and then hooked in an imperious style for a six.

But Lara's overconfidence cost him his wicket as he aimed to drive Patel on the up but holed out to Yuvraj Singh at cover-point.

Sarwan fell first ball after tea when he prodded at a straighter one from Kumble hesistantly and was rapped on the pads in line with the off stump.

The right-hander in the course of his innings reached the 4000-run mark in his 60th Test.

He was unruffled by the guiles of Kumble whose variations he quickly adjusted to and played some elegant on drives and sweeps.

The 'New Big Dog' upper cut Rajvir Singh and responded to Sreesanth's mental disintegration techniques by effortlessly picking him up from the off-stump to over mid-wicket for a four.

The run-rate had fallen from a frenetic five an over when Gayle was at the crease to just over 2.5 per over in the post-lunch session, but it picked up with Bravo's arrival.

He was the dominant partner of a 73-run association with Shivnarine Chanderpaul (24) but Sehwag's gripping off-spin ended the partnership.

Chanderpaul was beaten while trying to cut the part-time bowler and, four overs later, Bravo was out a sparkling piece of glovework by Mahendra Singh Dhoni.