Why Asia Matters For America

It's the jobs, stupid. “Jobs lost to Asia” is a refrain of politicians and media, yet the facts tell a different story. Trade and investment with Asia create hundreds of thousands of jobs in the US.

“Jobs” is now a fraught four-letter word for America. With unemployment in the United States hovering around 9 percent, the word resonates for millions of struggling individuals and families, not to mention politicians and policymakers. And no other geographical region in the world today receives more attention in that context than Asia. “Jobs lost to Asia” is a refrain of politicians and media, yet the facts tell a different story. Trade and investment with Asia creates jobs in the US.

It is true that some jobs in some sectors have been lost to Asia; beginning with textiles and clothing in the post-1945 period through inexpensive electronics to steel and shipbuilding more recently. Outsourcing is occurring. But US interactions with Asia across such activities as trade, inward and outward foreign investment, foreign students at US universities, tourism and even immigration create hundreds of thousands of jobs for Americans. A new initiative from the East West Center called Asia Matters for America uses largely US government data in an effort to show economic and employment impacts from US interactions with Asia at the national level, but also at the state and congressional district levels. www.AsiaMattersforAmerica.org 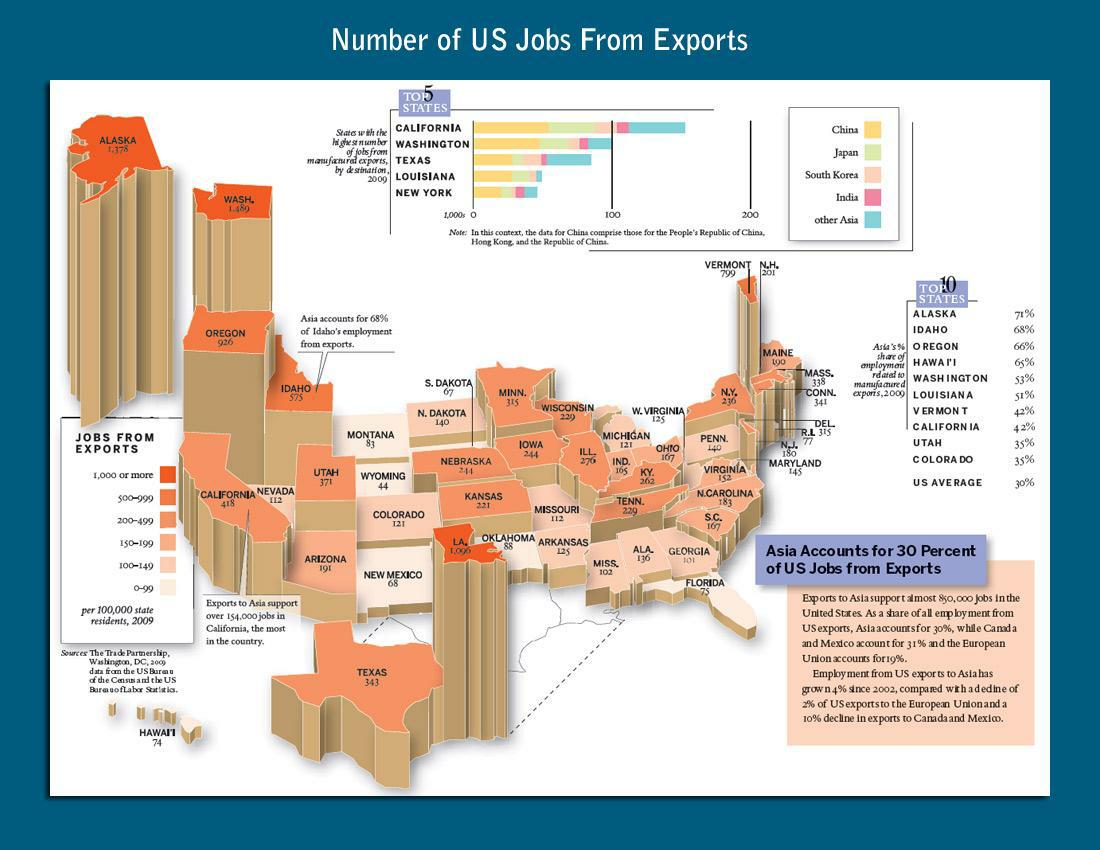 Number of US Jobs From Exports. Map from East-West Center.

America’s anxieties are understandable. With the rapid economic growth of China, India, South Korea, Vietnam and others, combined with these same countries’ ability to withstand the 2008 global financial crisis, increasing American doubts about globalization and generalized worries about debt and decline, commerce with Asia is seen as negatively affecting American job prospects. Whether the issue is innovation, preferential visas for immigrants, artificially propped currency values or outsourcing, much of popular discourse is about the US left holding the short end of the stick with Asia. President Barack Obama did not directly implicate Asia in his January 2011 call to “win the future,” but referred to “our generation’s sputnik moment” and the need to confront global economic competition and maintain influence with investment in research, education and infrastructure.

But the overall picture shows a less dire outlook and remarkable economic and employment gain from interactions with Asia. Take trade. US goods and services exports to Asia in 2009 were valued at $414 billion—more than to the European Union or to Canada or Mexico.What’s more, trade is rising rapidly. It’s estimated that some 850,000 US jobs are accounted for by exports to Asia – nearly a third of all employment from exports.

However, persistent and in some cases, growing trade deficits remain a fact in US goods trade with Asia though not in services trade. 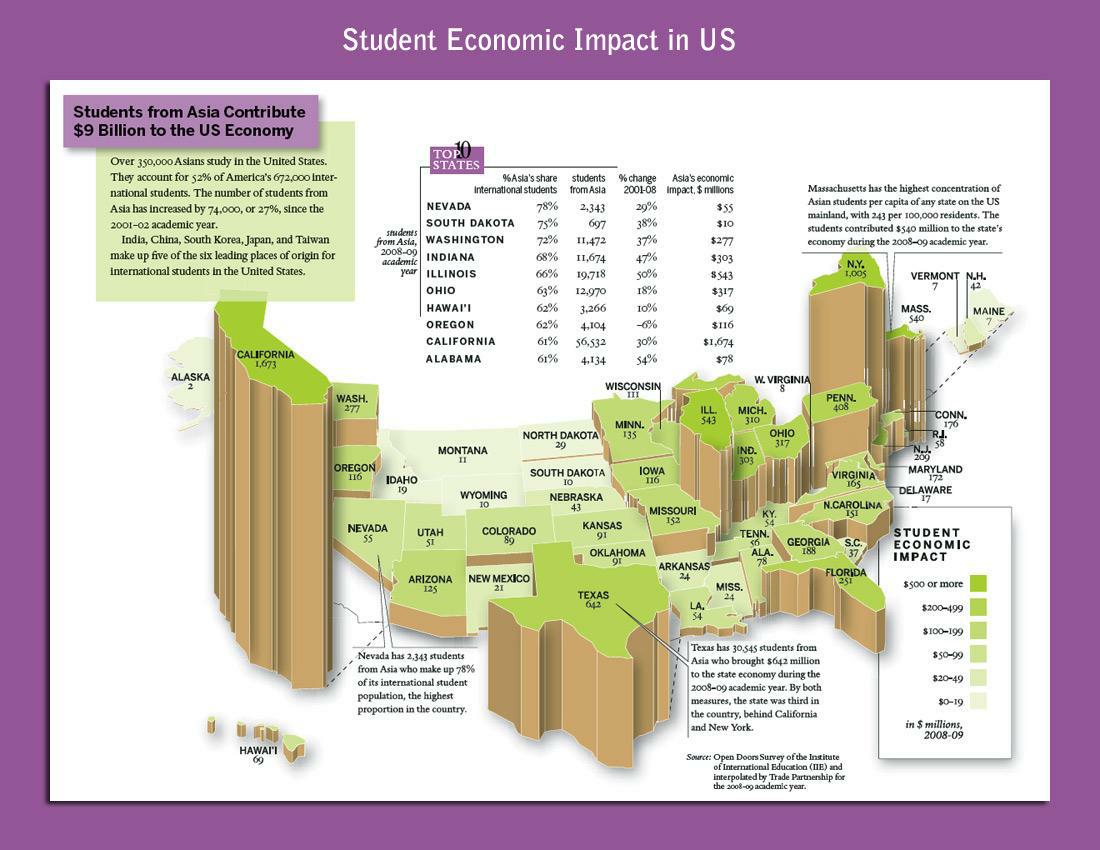 Student Economic Impact in US. Map from East-West Center

Exports to Asia are just part of the story. Foreign direct investment from the Asia-Pacific region also creates US jobs. It’s estimated that Japanese FDI in the US accounts for some 665,000 jobs and Korean investment – particularly in its new automobile production factories – is rising rapidly, as shown in a forthcoming site. In 2010, three Asia-Pacific countries – Japan, Australia and India – invested more in the United States than the US did in those countries. With China’s FDI expected to boom, notwithstanding concerns about some elements of that investment, it’s reasonable to expect more US jobs coming from such investment. (www.JapanMattersforAmerica.org)

Even moving beyond traditional “commercial” sources of employment and economic gain, Asia’s weight for America is increasing. One of the largest US service-sector industries is education. About 700,000 foreign students are in the US of which more than 50 percent are from Asia, and the growth rate has been about 25 percent over the past decade. Apart from the hard-to-measure societal benefits of such exchanges, the Institute of International Education has estimated that students from Asia contribute about $9 billion to the US economy each year. Many students stay on to become entrepreneurs, creating new companies that provide employment. Silicon Valley, in particular, is known for the Asia-born, US-educated share of its entrepreneurs – but they are located throughout the country. As with employment from exports, the states which benefit from Asian students include California, Texas, New York and other large US states. But on the basis of Asia’s share of all international students, states like Nevada, South Dakota, Alabama, though their absolute numbers are smaller, still benefit. Nevada ranks first in the country with 78 percent of its 2,343 students from Asia and South Dakota ranks second with 75 percent of its 697 students from Asia.

Another, growing aspect of US-Asia interactions is immigration. Today, just over a quarter of the foreign-born US population comes from Asia. Nearly 10 million of some 38 million residents born outside the US are from Asia and contribute economically, culturally and politically. Significant empirical and analytical work highlights Asian and Asian-American contributions to information and computer technology companies that generate income and jobs. According to one well-known study by a Duke University professor Vivek Wadhwa, “in a quarter of the U.S. science and technology companies founded from 1995 to 2005, the chief executive or lead technologist was foreign-born.” These companies were found to have “generated $52 billion in revenue and employed 450,000 workers.” Immigrants from India, China, Taiwan and Japan comprise a high share of these company startups.

US interactions with Asia across a range of activities from commerce to culture and from diplomacy to the environment will continue to increase in the years ahead. Some interactions will benefit the United States more than others.

But in many areas, growing US-Asia ties could benefit the economic and employment outlook for the United States.

Satu Limaye is director of the East-West Center in Washington. He conceived and created the Asia Matters for America initiative and directs the project. Rights: Copyright © 2011 Yale Center for the Study of Globalization Courtesy, YaleGlobal Online

Doha: Do Or Die Now