'Who's This Noel David?'

The former BCCI secretary throws light on the surprising selection of the unknown Hyderabad spinner as a replacement for the injured Srinath during the 1996-97 Caribbean tour against the wishes of skipper Sachin Tendulkar, who hadn't even heard his 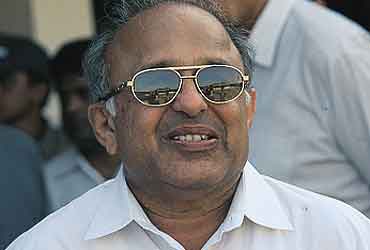 Former BCCI secretary Jaywant Lele confirmed there was something fishy about the selection of the unheard-of Noel David from Hyderabad as a replacement for injured speedster Javagal Srinath on the tour of the West Indies in 1996-97. Excerpts:

Can you shed light on the controversy about Noel David's unexpected selection as a replacement for the injured Srinath?

All I can say is that captain Sachin Tendulkar was against David's selection. Why, he hadn't even heard his name.

I was the BCCI secretary and the convenor of the selection committee as well. When Srinath got injured, I received a faxed message from Tendulkar. He wanted an extra spinner to replace Srinath. He thought a spinner would be more effective than a medium pacer because of the nature of the Caribbean pitches.

Did Tendulkar have any particular spinner in mind?

He had two off-spinners in mind - Baroda's Tushar Arothe and Hyderabad's Kanwaljit Singh.

Why did the BCCI then send David, going against the captain's wishes?

I really don't know. Even before they held a hurried teleconference, I had told the selectors that Tendulkar wanted either Arothe or Kanwaljit. But they came up with David's name.

Do you think a particular selector or two may have prevailed over the others? Do you think money may have changed hands, considering that David was a novice and was unable to find a place even in the Hyderabad team?

I can't comment on that simply because I wasn't part of it. As I said, they didn't meet personally, but discussed the matter over the phone. Why do you ask me all this? Why don't you ask the selectors concerned?

What was Ramakant Desai's stand? What was he doing as chairman of selectors?

He just called me to inform that his fellow selectors had ignored the team management's request and decided to send David. As you know, "Tiny" (Desai) was too mild a man. I don't think he'd have bothered to argue with any selector even if the latter had insisted on including a player of his choice.

What was Tendulkar's reaction when you apprised him of the development?

I think he was shocked. I remember him asking me "Who's this Noel David?" He said he wasn't interested in having David for Srinath. He sent me another faxed message and insisted on sending Arothe, if not Kanwaljit, but certainly not David. Tendulkar said he was impressed by Arothe's bowling even though he was mainly a batsman. But it wasn't to be and David was flown in.

What did coach Madan Lal say?

I don't know. I've no idea what he said or how he reacted.