War-Time Realism Through the Looking Glass 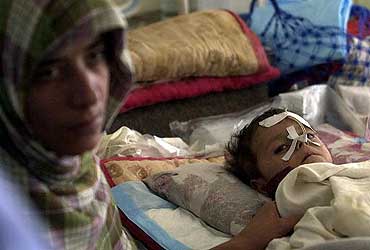 To hear those who support the current air assault on Afghanistan tell it, those of us who doubt the likely efficacy of such a campaign, and who question its fundamental morality are not only insufficiently patriotic but dangerously naive. Lampooning the left for adhering to such ostensibly simplistic slogans as "violence begets violence," these self-proclaimed pragmatists insist that sometimes massive force is necessary and that in the case of Osama bin Laden and al-Qaeda, little else could possibly serve to diminish the threat of terrorist attack.

It takes me back, all this self-assured confidence in the value of preemptive assault. To 1986 in particular, when a co-worker of mine insisted that although our bombing of Libya had failed to kill Colonel Quadafi, that by killing his daughter we had nonetheless served the cause of peace. After all, said my co-worker, she was destined to become a terrorist someday, so better to kill her before she grew. That others might be able to apply the same logic to Americans--who, after all couldgrow up to be Elliot Abrams--was lost on her, as she was convinced the world had been made safer that day.

Of course, come to find out that Libya had not been involved in the terrorist incident for which we claimed to be attacking them, but why bother with details? And of course, just two years after my colleague insisted that our assault on Libya had made us safer, 259 people in a plane over Lockerbie, Scotland--and eleven more on the ground there--learned how dangerously ignorant such faith really was. They as it turned out became the victims of actual Libyan terrorists enraged by the previous U.S. attack on their country.

All this talk of what’s naive and what is realistic has seemed to be nothing if not bizarre. It’s as if words no longer have their original meanings, or perhaps mean the opposite of what one might otherwise think.

So to be realistic means to believe that bombing one of the poorest nations on Earth will not only reduce terrorism, but also fail to ignite a new round of anti-American fanaticism. To be naïve, on the other hand, is to pay attention to modern history, which tells us in no uncertain terms that bombing people is rather likely to fuel their anger, resentment, and desire for revenge.

To be realistic is to think that pummeling one nation--in this case Afghanistan--will have some appreciable effect on the thugs in al-Qaeda, despite the fact that the group operates in sixty-four countries including many allies whom we have no intention of bombing. To be naive is to point out that terrorists aren’t reliant on one, or even several countries to operate, and as such, we could eradicate every member of the Taliban tomorrow without delaying by so much as a day any future attacks on our shores.

To be realistic is to believe our government officials when they insist they have proof of bin Laden’s involvement in the 9/11 attacks. To be naive is to wonder how an intelligence community that completely missed the signs of impending disaster, could be so sure, so soon, of who did this thing that they had no idea was coming in the first place.

To be really naïve, I guess, would be to think that perhaps they might be lying. Forget that that’s exactly what they did so as to justify bombing Quadafi, and what they did when the CIA announced that armed Libyans were roaming the streets of America, planning to assassinate Ronald Reagan. And it’s what they did when they claimed the Soviets were building a military base in Grenada, or that the Sandinistas in Nicaragua were running drugs (actually it was our guys, the contras, who were doing that). And apropos of today’s headlines, it’s what they did when they decided to dub a certain band of fundamentalist thugs known as the Mujahadeen, "freedom fighters."

To be realistic is to say things like "all they respect is force." To be naive is to point out that the force we have demonstrated over the years by our support for Israel, or bombing and sanctions against Iraq, has apparently led not to something so kind as their respect for us, but rather to their willingness to slaughter as many Americans as possible. If this is how al-Qaeda shows respect, I shudder to think what disdain must look like.

To be realistic is to say, "we tried peace and peace failed." To be naive is to ask when, exactly, did the U.S. try peace: in the region, or specifically in Afghanistan? Was it when we were selling Stinger missiles to the Muj, so as to help them fight the Soviets? Or was it after, when we left the nation in ruins, unconcerned about helping rebuild so long as the Russians had fled? Or was it when we cozied up to the Taliban because they promised to crack down on opium cultivation, using the time-honored anti-crime techniques of extremist Islam?

To be realistic is to insist that nations harboring terrorists must be brought to justice. To be naive is to note that a) we aren’t really serious about that--after all, many nations that do so are coalition partners in the war on Afghanistan; and b) by that standard, any number of nations would have the right to attack us. After all, we have harbored and even taught terrorists and death squad leaders at the School of the Americas at Fort Benning, Georgia. We have harbored known Cuban terrorists in Miami. We even gave a tax exemption for several years to a neo-Nazi "church" affiliated with the National Alliance, whose leader has called for worldwide racial cleansing, whose words are credited with inspiring Timothy McVeigh, and whose members have committed bombings, murders and armed robberies across the country.

To be realistic is to believe that Afghans will be impressed by our packets of peanut butter, dropped from airplanes, and that they will thank us, and view us as their beneficent saviors. To be naive is to point out that the food drops--according to relief agencies--are insufficient to meet the need, especially since our bombing has aggravated the refugee crisis to staggering proportions. To be really naive is to note that to even get the food, Afghans would have to traipse across minefields, and that their experience with toy dolls dropped from Soviet planes in the 80’s--which turned out to be explosives--might have left them a bit reluctant to tear into our humanitarian goodies. To be naive to the point of disloyalty, would, I suppose, be to ask whether or not American soldiers in Pearl Harbor would have felt better about the bombing of December 7, 1941, had the Japanese pilots made a second run to drop sushi and edamame.

To be realistic is to claim that attacks on Afghanistan will lead the pulverized citizenry to overthrow their Taliban oppressors. To be naive is to point out that never in history has a nation under attack blamed its own leaders for the attack, but rather, exactly the opposite. After all, in the wake of 9/11, Americans did not, en masse write to the President demanding he accede to the wishes of Osama bin Laden.

To be realistic is to insist that this is not a war on Islam. To be naive is to point out that if we continue to bomb, especially through the holy month of Ramadan, there will be few Muslims in the world who will believe that.

Perhaps it’s just me. But something seems dangerously Alice in Wonderland, when Clinton Advisor Dick Morris can say on national television that we should declare war on Afghanistan, and then Iraq, Libya, Sudan, and Columbia--and not be viewed as a paragon of mental illness--but Quakers and pacifists are derided as uninformed boobs.

And yet I have no doubt that many of these American warlords will attend Martin Luther King Jr. day celebrations come January, and sing the praises of a man who would have condemned them roundly for their current course of action. And they will continue to go to church--those who call themselves Christians--and sing praises to someone whose teachings run completely counter to everything they are now doing. But hey--King, Ghandi, Jesus: what did they know? Dreamers all of them: naïve, simplistic, innocent, and not nearly as informed or clear-headed as say, Donald Rumsfeld, or Stephen Ambrose, or Tom Clancy, or White House spokesman Ari Fleischer.

Even more disturbing than the uniformity with which conservatives have labeled dissenters un-American and unrealistic (which at least is to be expected), is the rapidity with which quite a few progressives have accepted the need for, and ultimate propriety of war. Richard Falk--a longtime international peace expert--has called Operation Enduring Freedom, "the first truly just war since World War II." This, despite the fact that by the standards he himself has laid out for a just war, the bombing of Afghanistan--and the refugee crisis alone that it has sparked—completely fail the test of justice (see Stephen Shalom, A "Just War"?)

Or Marc Cooper, who recently suggested that antiwar protesters might suffer from self-hatred, and who accused us of claiming that the U.S. invited the attacks of the 11th, merely because we dare point out the truism that certain of our policies might have something to do with the motivation for flying 757’s into buildings. The difference between explanation and excuse apparently having escaped him, and the good counsel of a Thesaurus that might explain the difference apparently being out of his reach, Cooper insists that the left should embrace limited military action (the substance of which he leaves undefined) as a "moral imperative."

And one hardly knows what to make of Eleanor Smeal, of the Fund for the Feminist Majority. Recently she testified to Congress about Afghanistan, not to plead for an end to the macho militarism currently underway, which is likely to accelerate the starvation of perhaps a million women and girls there, but merely to suggest that the women of Afghanistan not be forgotten in any reconstruction government. Not only does she appear to support the overthrow of the Taliban by the same U.S. government that funded it and cared not a whit for the women there until six weeks ago, but she also seems to trust that patriarchy can be pounded into rubble by exploding phallic symbols, dropped and fired by guys whose view of feminism is probably not much better than Mullah Omar’s. Talk about irony.

Again, maybe it’s just me. Or maybe it’s 1984, and War Is Peace, and Slavery Is Freedom, and Ignorance IsStrength. Or maybe all that is just bullshit, being served up on a silver platter, while the servers tell us it’s really Goose Liver Pate. It reminds me of something my Grandma once said: "You can call your ass a turkey, but that doesn’t make it Thanksgiving." Likewise, you can call your war just, and the rest of us naive, but that won’t make it so.

(By arrangement with Znet. Tim Wise is a writer, activist and antiracism educator. He can be reached at tjwise@mindspring.com)