The plot thickens - Dipendra had bullet wounds on his back; conspiracy theories abound as public turns violent; Paras and Gyanendra under suspicion 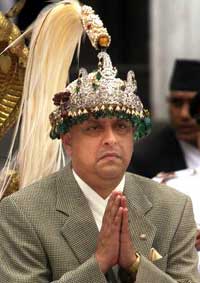 So it may not have been Dipendra as earlier supposed and widely circulated. Contradictory claims, terrible theories and sensational stories abound but nothing reliable can be ascertained so far.

Bowing to mounting public demand, Nepal's new king Gyanendra has ordered a judicial inquiry into the massacre that wiped out virtually the entire royal family.

"We have constituted a three-man commission of inquiry headed by the chief justice Keshav Prasad Upadhya to investigate the circumstances leading to the tragic incident," the king said in a statement broadcast on state radio.

The commission would submit its report to him within three days, the king said.

Other members of the commission are parliament speaker Tara Nath Rana Bhat and leader of the opposition in the house Madhav Kumar of Communist Party of Nepal (UML).

Earlier, according to BBC, the new king acknowledged that the full facts of the shootings had not been disclosed, saying: "There were constitutional and legal difficulties in expressing what had actually transpired."

Early on Monday, the slain king's son, Dipendra - who had been declared king on Saturday - died of injuries sustained during the attack.

On Sunday, the official line had changed -- officials denied persistent reports that it was Dipendra who opened fire, describing the incident as an accident.

Both Gyanendra and Koirala specifically referred to an ''accidental'' automatic weapon fire being responsible for the royal massacre that occurred during a family dinner at the Narayanhiti royal palace on friday night.

Their statements had no no references to Dipendra being the gunman.

Deputy prime minister Paudel, too, reportedly went back on his statement that had pinpointed Dipendra as the gunman earlier.

"I never said the crown prince did it," he was quoted as having said.

In a bid to assuage the feelings of the grief stricken people in the Himalayan kingdom, Koirala said government would make the facts of the incident public after investigating the killings even as many questions remained unanswered over the circumstances leading to the ghastly tragedy.

At least the bit about Dipendra having shot himself after spraying the royal family with bullets that resulted in 8 deaths of the royals, seems totally contradicted with official sources claiming that Dipendra had received gun shot wounds on his back.

''I want to assure the people that the truth and facts of this incident will be made public,'' Koirala said.

Elaborating on the royal tragedy, prince Gyanendra in his message broadcast to the people over the state-run media said the injured royal family members were taken to army hospital following the accident that took place after an ''automatic weapon suddenly exploded.''

Eight of the royal members had succumbed to their wounds despite the best efforts of the medical staff, he said.

The Nepalese media has also been highlighting the lack of official and authentic information on what actually happened at the royal dinner being responsible for all kinds of rumours about the massacre.

"People still have not got answers to the mysterious, abnormal and terrible haphazard shootings which killed Nepal's monarch and his family members," said the national daily Nepal Samachar Patra.