How can one get into college without passing school? The one social group that needs affirmative action (not quotas) is the Muslims; but strangely, it is politically incorrect to talk about it. 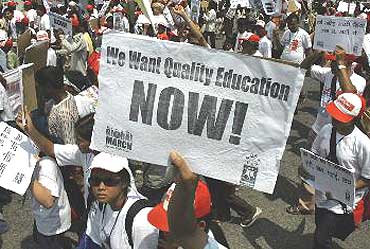 outlookindia.com
-0001-11-30T00:00:00+05:53
What are the goals of affirmative action policies in India, particularly in education? The question should ideally be "what should be …" but "should" is not part of the vocabulary of the Indian politician, who has always deemed the Constitution as putty, to be converted into clay at a "political" moment’s notice. First and foremost, the stated goal of affirmative action is for the state to provide equal opportunities to all citizens. And since education is the major asset of most individuals, state support is needed to provide the opportunity for education. Provision of education opportunities starts at the primary school level. But poverty deprives individuals from attaining education to the best of their ability; hence, the need for income support (only one form of which is a scholarship) for the poor. Poverty afflicts all castes and religions; hence, the need to address the concerns of all "socially and economically backward" citizens—a group which incidentally (this might be news to the election-conscious Congress) includes Muslims and non-OBC and non-SC/ST Hindus.

Affirmative action at the college level is not as straightforward for the simple reason that admission requires passing high school. Reservations for colleges, to be successful and/or have any meaning, mean that the school system has to have provided equal opportunities earlier.

How should one provide equal opportunity at the college level? What we know about capitalism is that it makes people go to extraordinary lengths to make money. So the walls of discrimination can easily be broken down, not through quotas, but more effectively through the greed of owners of colleges: education vouchers for the needy. In the quota system, public universities like the IITs can set up discriminatory rules in the form of ability or minimum standards. In the present quota system, all quota individuals cannot get into most good colleges. But in a voucher system, where effectively the state guarantees equal opportunity, the non-able SC/ST will be able to enter some private sector colleges. Because she has the ability to pay the capitation and other fees (via government-provided education vouchers) to any university that admits her—and some college will be willing, no matter how unmeritorious the candidate. Note that this means a level playing field for the lesser students from both rich and poor families.

There is another reason why the Congress party legislation for quotas for OBCs is not warranted. It is that the system, whatever it is, is already working reasonably well. The purpose of quotas, affirmative action, is to provide equal opportunity for all. No one, not even the CPM coffee shop revolutionary leaders, is arguing for quotas or justice in the form that at every university there should be the same representation, as the general population. 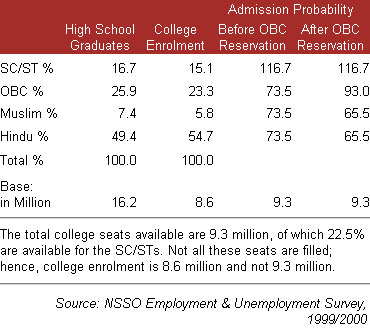 These simple statistics should make us sit up and take notice. The one group that needs government support the most is Muslims. Only 7.4 per cent of children graduating from high school are Muslims, whereas their share in the population (Census 2001) is 13.4 per cent, i.e. their shortfall is 45 per cent (ratio of 7.4 and 13.4 is 55 per cent). In contrast, the shortfall for SC/STs is 32 per cent. For the OBCs, the shortfall is a minuscule 4 per cent. Very few people, and no one from the politically conscious and politically correct Congress party, are pushing through policies to help those who need it the most—the Muslims.

The high school statistics also put in perspective how much the state can achieve by affirmative action at the college level. The shortfall for both Muslims and SC/STs at the high school level cannot, and should not, be addressed at the college level. It is equivalent to asking colleges to admit students who have failed high school, something not desirable in democratic societies, no matter what the perceived social injustices visited upon these castes (and religions) by events that happened more than five generations ago.

Students passing out of schools choose one of three alternatives, roughly in order of ability: the least able do not go to college or enter diploma courses; the somewhat able enter diploma courses since they do not get admission into colleges, and the most able obtain college admission. The "ability" ratios (the proportion of high school graduates entering college) across castes and religions are approximately the same. Again, the major deviation from "equality" is observed for Muslims—they comprise 5.8 per cent of the college-going population, and 7.4 per cent of high school graduates.

Given this reality, it is quite unfair of Mr Advani or the BJP to accuse Congress of "appeasing" the Muslims. If anything, they have consistently acted, and are now acting, against the interests of the minorities, especially the Muslims.

Surjit Bhalla is president, Oxus Investments, and the author of Imagine There’s No Country. This article first appeared in Business Standard, and is reproduced here with the author's permission.