Who Gains From Reservation?

Obviously not the poor. But it is, less obviously, not even the leaders of the caste-based parties. The biggest beneficiaries would seem the big, corrupt eco-political mafia and its global partners. 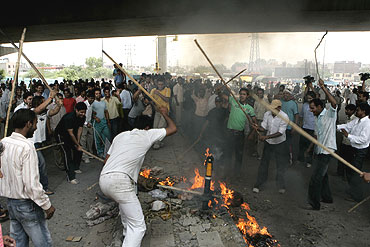 Who gains most from caste-based reservation? Certainly not the poor. The poor dominate the OBC, SC and ST groups. The SC and ST are groups apart. Their special conditions inspired special treatment from the founding fathers of the constitution. They were granted job reservation to last for just the first ten years of independent India. After sixty years not only has reservation for them continued, not only has the scope of reservation greatly widened to include prosperous and domineering castes, but the benefits of reservation have reached only a small percentage of the castes and groups that qualify for reservation. This is the sad, incontrovertible truth.

The Chamars have hogged most of the SC reservation because the politicians who acquired power from among this group were predominantly Chamars. That is why the Balmikhis, the Bhangis and various other Dalit castes remain resentful. Within the OBC quota in the north it is the Yadavs who have hogged maximum benefits, because, as the largest OBC caste in the north, they acquired most political power. That is why OBC castes such as the Kurmis, Lodhs and others have organized their own caste-based parties.

Ironically, actual economic benefits in any substantial manner have not reached either the Chamar or the Yadav community. Reason? Jobs are too few and demand is too high. Even the limited number of reserved posts often remains unfilled, because there are simply not enough qualified applicants. Reason? Notional affirmative action has led governments to focus mainly on higher education. Universal primary education -- affordable within the budgetary allocations for education -- has tended to be ignored by governments. 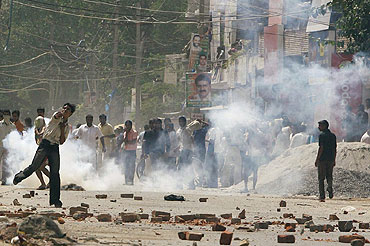 Two glaring aspects of the current electoral scene are the proliferation of political outfits based on caste or community, and the inordinately high cost of maintaining these outfits. Add to these the high and rising cost of electioneering. In this scenario corruption grows, the number of parties grows, and the absolute reliance on money to sustain political cadres grows. So, who is the biggest beneficiary of these conditions?

On any sober reckoning the biggest beneficiaries would seem the big, corrupt eco-political mafia and its global partners. The crucial role of money and the fragmentation of the polity give this class virtual freedom to manipulate politics. The absence of ideology and policy among parties, with their survival directly or indirectly based on corrupt deals and funding, facilitates the making and breaking of political alliances. Recall how BSP and SP allied to win power and how they split to become bitter foes. Recall the ease with which BJP’s Kalyan Singh, the destroyer of Babri Masjid, defected to Mulayam Singh. And recall also the ease with which the BJP welcomed him back with open arms. Recall how Karunanidhi allied with the BJP, then with the Congress. Recall how Mamata Bannerji allied with BJP, then broke away, and now quite possibly is inching towards the Congress. Recall how Jayalalithaa was with Rajiv Gandhi, later with Vajpayee. Examples are endless. Power hungry politicians bereft of principles and policies, operating in a badly fragmented polity, provide the easiest pickings for this mafia.

The eco-political mafia therefore is the biggest beneficiary of caste-based reservation. It is the master that can install or destroy governments, can make or break political alliances. One might ask: but can politicians be influenced by this corporate class? To determine this, consider the Samajwadi Party (SP) which swears by Dr Lohia and is directed by Amar Singh. Even Mulayam Singh would not dispute Amar Singh’s phenomenal access to big business, with a reach that extends to the world’s richest as listed by Forbes. Or consider Laloo Yadav. Ignore the cases of corruption and disproportionate assets against him. These days he talks more about IPL cricket than about rural development. Or consider Mayawati, whose much-talked about obsession with personal wealth and property reflects big business aspirations rather than help and backing for poor Dalits. Or consider the BJP, in which many leaders, after assuming power, have transformed their lifestyles beyond recognition from their Spartan origins in the RSS. Congress leaders one need not consider. They have the longest record that attests to their orientation.

On any sober reckoning, then, caste-based reservation has helped the eco-political mafia the most to achieve a total stranglehold on India's politics. Let politicians make any claims. Thanks to political fragmentation caused by reservation, dubious businessmen call the shots.