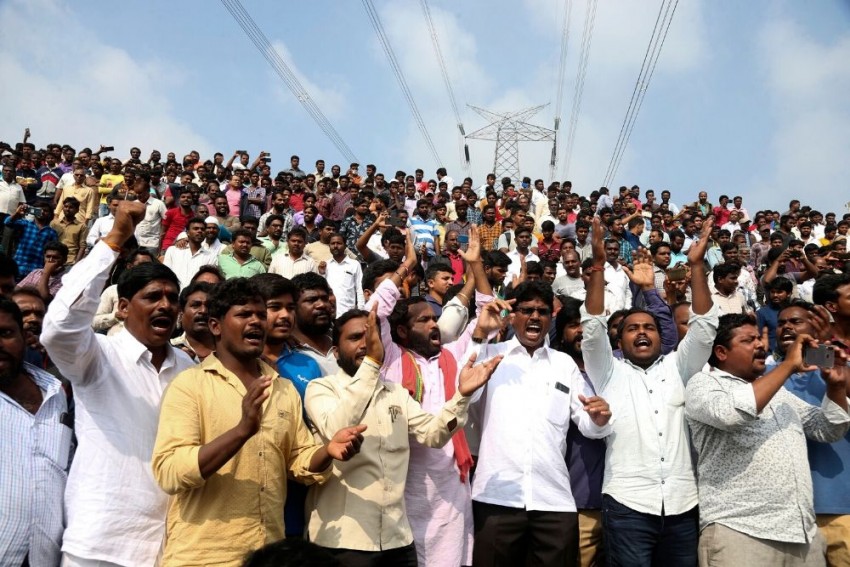 People shout slogans in favor of police and cheer them while gathering near the place where rape accused were shot in Shadnagar some 50 kilometers from Hyderabad, India.
AP Photo
Outlook Web Bureau 2019-12-06T11:24:00+05:30 'What's The Point Of Courts, Law': Politicians Divided Over Telangana Encounter 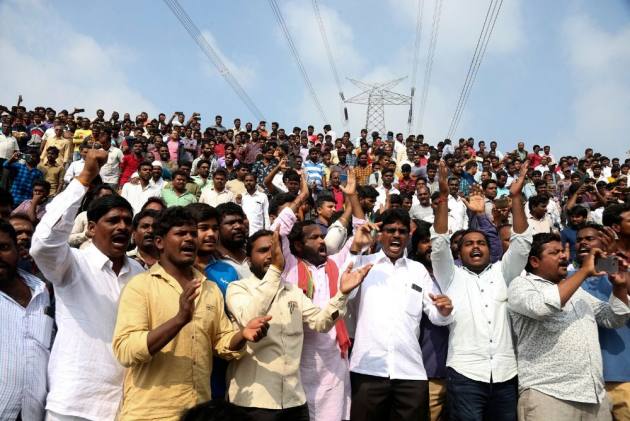 While many celebrated the killing of the four accused in a rape-murder case of a 26-year-old veterinarian on Friday, BJP leader and former Union minister Maneka Gandhi said one could not take law in their hands for it is dangerous for the country.

Gandhi is among a handful of politicians who raised questions over the killing of the rape accused.

While most BJP leaders hailed the police, Gandhi said, "Jo hua hai bohot bhayanak hua hai desh ke liye (Whatever has happened is dangerous for the nation). You can't take law in your hands. They (accused) would've been hanged by Court anyhow. If you're going to shoot them before due process of law has been followed, then what's the point of having courts, law and police?"

Politicians from all quarters both congratulated and criticised the Telangana police.

Saying that people were expressing happiness over the encounter as they were angry, AAP leader and Delhi Chief Minister Arvind Kejriwal said, "It is also something to be worried about, the way people have lost their faith in the criminal justice system."

NCP chief Nawab Malik, while supporting a public hanging of the accused, said, did not approve of the encounter. He said justice could not be delivered in an "unjust manner".

On some people criticising the encounter as a possible 'extra-judicial killing', Congress leader and MP Shashi Tharoor tweeted saying, "Agree in principle. We need to know more, for instance if the criminals were armed, the police may have been justified in opening fire preemptively. Until details emerge we should not rush to condemn. But extra-judicial killings are otherwise unacceptable in a society of laws."

Former Union home minister P Chidambaram asked for a "thorough inquiry" into the killing of the four people,

However, Congress leader Sanjay Nirupam said on Twitter, "Encounter killing of all 4 accused of #HydrabadRapeCase may seem like unlawful but it was the need of the hour."

Former Supreme Court Judge Markandey Katju was one of those who raised questions and said  the encounter appeared to be "fake."

He also quoted a judgment in a fake-encounter case: "Justice AN Mulla of the Alld (Allahabad) HC in a judgment said “ I say with all sense of responsibility, there is not a single lawless group in d whole of d country whose record of crime comes anywhere near than that of the organized gang of criminals known as the Indian Police Force.“

"This is the biggest incident in the 19th year of this century that will guarantee women's safety," BJP National Vice-President Uma Bharti tweeted in Hindi.

She said that all the police officers and policemen who executed this encounter deserved greetings.

He tweeted, "I congratulate the Hyderabad police and the leadership that allows the police to act like police. Let all know this is the country where good will always prevail over evil  (Disclaimer for holier than thou- police acted swiftly in self-defence)," he tweeted.

Maharashtra BJP spokesperson Shaina NC took to Twitter to call the death of the accused in the alleged encounter as "natural justice."

"Today is a victory for every woman who has wanted stern punishment for rapists. We know the process of law is long-drawn-out as we have seen in the Nirbhaya case. But sometimes an encounter is natural justice," she said.

Also Read: 'Her Soul Must Be At Peace Now': Telangana Vet's Family Thanks Police

YSR Congress leader Raghu Rama Krishna Raju said, "They deserved to be shot dead", adding, "No NGO should oppose it and if they do so, they are anti-national."

Groups of people also gathered near the encounter site where the four accused were killed in the alleged encounter and cheered the police.

The accused tried to escape while being taken to the crime spot, police claimed, during which a crossfire took place resulting in the death of the four persons.  The incident happened between 3 am to 6 am on Friday.

The four accused, all lorry workers, were arrested and were in judicial custody and lodged in high-security cells at Cherlapally Central Jail in Hyderabad.

Police said that the veterinarian was brutally raped and killed by the accused who burned her body in Shamshabad area on November 27. Her charred body was recovered on November 28.

'Her Soul Must Be At Peace Now': Telangana Vet's Family Thanks Police