Home  »  Website  »  National  »  What The SC Said About Jayalalithaa: She Was The Source Of Funds For Shell Companies

What The SC Said About Jayalalithaa: She Was The Source Of Funds For Shell Companies

Nevertheless, the Rs 100-crore fine imposed on Jayalalithaa during the conviction will be recovered from her properties. 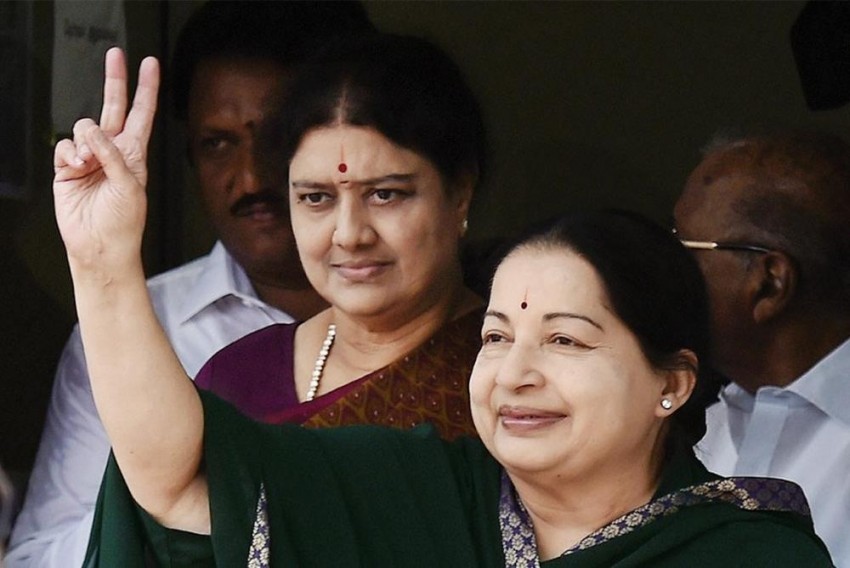 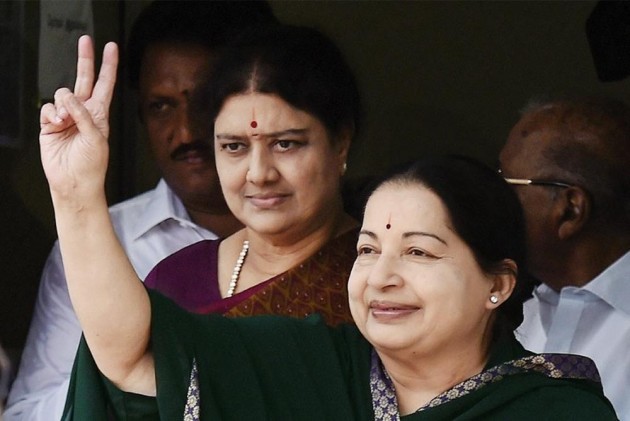 After 20 years, the Supreme Court has finally found V.K. Sasikala, her nephew Sudhakaran and widowed sister-in-law Elavarasi guilty in a case of disproportionate assets.

The judgement comes after two decades of court battles, raids that revealed kilos of gold and silver, expensive sarees and 750 pairs of shoes and other assets. Since the probe began in 1996, Jayalalithaa has been the CM of Tamil Nadu thrice.

Sasikala was a close confidante of deceased TN CM and AIADMK supremo, J. Jayalalithaa, who was the main accused in the DA case that has taken 20 years to go through legal processes.

Jayalalithaa was accused of amassing wealth to the tune of Rs 66 crore within the five years of her first tenure as CM of Tamil Nadu, which she began with a declared income of around Rs 2 crore.

It has now been held that Jayalalitha and Sasikala conspired to float companies in the names of Sasikala, Elavarasi and Sudhakaran during that time to launder Jayalalitha’s money through 34 companies (see list of 32 below) owned by the latter three. These companies were then used to purchase assets and did not conduct any business during the five years in question.

A Supreme Court bench of Justices Pinaki Chandra Ghose and Amitava Roy has upheld their sentence of four years each along with a fine of Rs 10 crore each. Jayalalithaa’s sentence had been for 10 years.

However, since Jayalalithaa had expired before the judgement, the appeal against her has ‘abated’. As per law, criminal cases cease upon the accused person’s death. After the conviction, Jayalalithaa had served 20 days of her sentence in a Karnataka jail before the court granted her bail.

Nevertheless, the Rs 100-crore fine imposed on Jayalalithaa during the conviction will be recovered from her properties.

Sasikala also cannot contest elections for a period of 10 years — during her four-year imprisonment and for a further six years during which she will remain disqualified from contesting.

In 2016, on an appeal from the Karnataka government, the Supreme Court had reserved judgement in the case after hearing arguments.

Lawyers for the Karnataka government pointed out that both the trial court and Karnataka HC have found that Jayalalitha was the sole source of income which was then distributed amongst companies owned by all four accused.

They also showed that even if the Karnataka HC calculations were followed, the disproportionate income was Rs 17 crore and not Rs 2 crore. That would mean disproportionate assets worth 211 percent.

In its 563-page judgment, the Supreme Court has addressed all issues and laid out the entire evidence to show that the trial court had been write at determining how disproportionate the assets were.

The dramatic personae and their modus

Upon her mother’s (N.R. Sandhya - also a former actress) death, Jayalalithaa inherited property worth around Rs 7.5 lakh. This included the Poes Garden residence in Chennai, a house in Hyderabad, property of around 17 acres in rural Telangana (formerly Andhra Pradesh), three acres of land and shares in some companies. This excluded a bank balance of Rs 1 lakh and some jewellery.

It was in 1988 that Sasikala became a close confidante of Jayalalithaa and began to live with her. Jayalalitha publicly acknowledged her as her friend-cum-sister.

By 1991, when Jayalalitha became the CM of Tamil Nadu, the fortune grew by about 20 times to around Rs 2 crore within a span of four years. Till 1989, Jayalalithaa had been a Rajya Sabha MP and from 1989 she was elected as a MLA of Tamil Nadu.

Soon afterwards, other members of Sasikala’s family moved into the Poes Garden house. Sasikala’s nephew (by her sister Vanithamani), V.N. Sudhakaran, shifted in 1992 while studying in Chennai. In the same year, Sasikala’s sister-in-law, J. Elavarasi, also moved in when her husband, viz Sasikala’s elder brother, died due to electrocution while working in Jayalalithaa’s farmhouse in Hyderabad.

In 1995, Jayalalithaa announced Sudhakaran as her foster son.

Till 1991, even when Jayalalithaa had become the CM her net worth (including some assets which were in Sasikala’s name) was around Rs 2 crore. Between 1987 and 1991, Jayalalithaa did not file any income tax returns, so the tax authorities would not have known how her wealth grew.

Around July 1991, Jayalalitha started acquiring several assets and floated around 32 companies (see list 1) in the names of Sasikala’s relatives who were living with her.

In the next five years, the amount of wealth allegedly amassed was around Rs 66 crore — 660 times the modest beginning of Rs 10 lakh in 1987 and 33 times the Rs 2 crore she had when she began her first tenure. The declared income of Jayalalithaa for the duration of her first term was around Rs 10 crore — grown by 100 times within less than a decade. But, she also spent Rs 9 crore during that same five-year period of her first term as CM.

Investigations had revealed that while Jayalalitha was the CM (1991-1996), the 32 companies had not conducted any business but had acquired several assets, especially real estate and some plant and machinery.

During this same first term as CM, these 32 companies did not file any income taxes nor did they file assessment for commercial taxes.

This would not have attracted any attention because Sasikala and her relatives were probably budding businessmen. However, their bank accounts were studied and it revealed that the source was hefty cash deposits and there were several transfers between the accounts to purchase the assists that the companies acquired.

Since Sudhakaran and Elavarasi did not have any means of their own, it was assumed that they were actually a front for Jayalalithaa to hold her assets.

In 1996, after Jayalalithaa’s term completed, then Janata Dal leader, Subramanian Swamy, filed a corruption and disproportionate assets complaint against her. It led to a probe by an IPS officer and finally a trial that was shifted to Karnataka, because it was believed that Jayalalithaa would influence the case, if it were to be tried in Tamil Nadu.

Through the investigation and the trial that followed, the authorities and the courts found that Jayalalitha’s expenditures were also quite high as were that of the companies owned in the name of Sasikala and her relatives.

At the end of the trial, the lower court held that Jayalalithaa’s (and the others’) assets were disproportionate by about Rs 56 crore. The trial court sentenced her to four and a half years in prison and fined her Rs 100 crore (or a year in lieu of the fine amount).

Sasikala and the others were sentenced to four years each and a fine of Rs 10 crore (or a year in case they were unable to pay the fine).

The Karnataka High Court did not agree with the trial court judgment. They held that the combined income of the four accused was around Rs 35 crore, the assets were around Rs 38 crore. Therefore their disproportionate assets would be around Rs 3 crore which was around 8 percent of the total assets of Rs 35 crore.

To arrive at the value of the income, the High Court accepted Jayalalithaa’s contention that revalued their income by cutting down the expenditure. That changed the value of the income and increased it greatly. For example, the investigators had calculated Sudhakaran’s wedding to veteran actor Shivaji Ganesan’s granddaughter to be worth Rs 6 crore. While the food cost around Rs 1 crore, erecting a pandal (decorated tent) at the venue itself cost more than Rs 5 crore. However, the HC accepted the expenses at only Rs 28 lakh.

Another expense of Rs 4 crore was accounted as a subscription scheme for AIADMK’s party publication Namadhu MGR. Several AIADMK politicians had also given evidence that they had paid for the subscription. This was also deducted from the asset value as an income.

As per a 1977 Supreme Court judgement, if the disproportionate assets are less than 10 percent, the accused should be acquitted. Based on calculations and the judgement, in July 2015, the Karnataka HC acquitted Jayalalithaa, Sasikala, Elavarasi and Sudhakaran.

Jayalalithaa’s defence had largely been that she had executed a power of attorney in favour of Sasikala and she was not aware what Sasikala and her relatives were up to. The apex court has not accepted this argument since Sasikala, Elavarasi and Sudhakaran were staying in her house “without any blood relation”.

The apex court has gone through reams of evidence from the trail court and dealt with the legal position of this evidence and its weight.