What A Buddy You Have, Mr President

The Islamic world saw widespread protests and violent demonstrations on the issue of the Danish cartoons. While the protest movement has subsided in the rest of the world, it is showing no signs of subsiding in Pakistan. Do you know why? 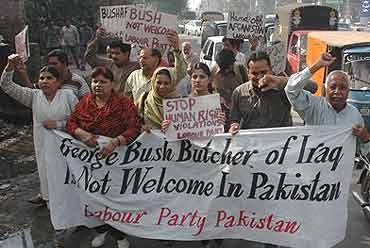 As you embark on your courageous visit to Pakistan, the adopted homeland of Osama bin Laden,  Ayman al-Zawahiri, Mulla Mohammed Omar and  other brutal killers of  hundreds of your fellow-citizens, may I request you to spare a thought for your fellow-citizens and for the nationals of other countries, who continue to die at the hands of international jihadi terrorists given sanctuary in Pakistan?

May I, in particular, request you to spare a thought for a young American boy called Daniel Pearl, who was kidnapped and killed brutally through beheading a little over four years ago at Karachi, from where Khalid Sheikh Mohammad, at the instance of bin Laden, planned and orchestrated the 9/11 terrorist strikes in the US homeland?

What was his crime in the eyes of the jihadi terrorists? They held him guilty on three counts: He was American; he was Jewish; and he was a journalist working for the Wall Street Journal.

You and other American leaders often reiterate that no terrorist who kills a fellow-American will go unpunished. Well, Mr. President, Omar Sheikh, the man, who orchestrated the kidnapping and brutal murder of Daniel Pearl, has just completed four years of comfortable life in a so-called prison in Hyderabad in the Sindh province of Pakistan without a hair of his being touched by Gen. Pervez Musharraf, your buddy, as you are fond of calling him.

Your buddy has seen to it that Omar Sheikh does not go to the gallows despite his having been sentenced to death by an anti-terrorism court three years  ago. From the so-called jail in Hyderabad, where he is provided with all the comforts and facilities he asks for--computers, Internet connections, fax machines etc--he continues to mastermind acts of jihadi terrorism and anti-US demonstrations and acts of violence in Pakistan, Afghanistan and other countries.

Omar orchestrated the anti-US demonstrations in Pakistan and Afghanistan over the alleged desecration of the Holy Koran by the security guards at the Guantanamo Bay detention centre in Cuba last year. His lawyers used to hold press conferences at which statements issued by the murderer of Daniel Pearl on the Holy Koran desecration allegations were distributed. He inspired the three British nationals of Pakistani origin, who carried out the London explosions of July 7, 2005. He orchestrated and continues to orchestrate the demonstrations in Pakistan and earlier in Afghanistan over the Danish cartoons.

Mr. President, you remember the two attempts to kill your buddy in December 2003, at Rawalpindi? Well, the guilty in those incidents have already been got tried by Musharraf, their appeals against their conviction got disposed of and those sentenced to death sent to the gallows. For your buddy, the law did not pose any difficulty in sending them to death for trying to kill him.

The same law, according to your buddy, has been standing in the way of the killers of Daniel Pearl being sent to the gallows. Do you know how many times the hearing in the appeal against the conviction filed by Omar Sheikh has been got adjourned by the appellate court? Forty-one times--under some flimsy pretext or the other.

It was adjourned for the forty-first time right on the eve of your visit to Pakistan. On February 27, 2006, the Sindh High Court adjourned the hearing once again on the ground that Omar Sheikh has sacked his defence lawyer and that the killer must be given time to find and engage another lawyer.

Mr. President, you must be aware of the old saying that a man is known by the friends -- or, buddies, as you would call them -- he keeps. What a buddy you have, Mr. President, in Gen. Musharraf!

Mr. President, the Islamic world saw widespread protests and violent demonstrations on the issue of the Danish cartoons. While the protest movement has subsided in the rest of the world, it is showing no signs of subsiding in Pakistan.

Do you know why?

Your buddy is himself instigating the fundamentalists and the jihadis to keep up the demonstrations till your visit is over. He is hoping that this will help him to convince you how heroically he is fighting against them to help the US at great risk to himself.