Vohra’s Removal: When Delhi Sprung Surprise On Mehbooba, Repeated It On J&K Governor

“Vohra’s removal was surprising. He was removed unceremoniously and without he having any prior information,” a senior politician says. 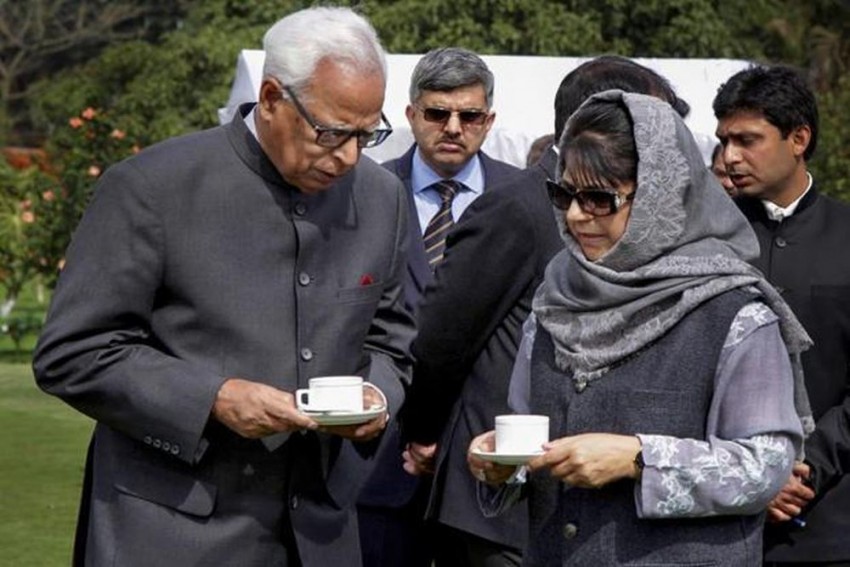 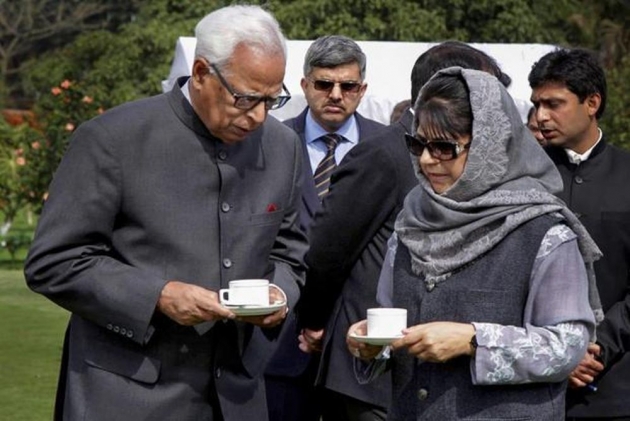 outlookindia.com
2018-08-23T16:23:16+0530
On Tuesday morning, NN Vohra was chairing a meeting at the civil secretariat Srinagar on the restoration of the Dal Lake, unaware of the fact that in next few hours he would be replaced by the central government as the governor of Jammu and Kashmir.
In the review meeting, now his last, Vohra upbraided the Lakes and Waterways Development Authority (LAWDA) vice-chairman over deterioration of the lake. According to the sources, Vohra was angry that the LAWDA was not doing enough to remove weeds from Dal and Nageen lakes. After the meeting, he left for New Delhi, which was construed as usual visit to the national capital.
“No leader or bureaucratic from outside Jammu and Kashmir has such a vast understanding of the state as Vohra, a former bureaucrat and Kashmir interlocutor who took over as the governor in 2008,  has. He was here much before he became the governor,” says a senior politician, adding that  Vohra was more of Kashmiri and he faced fate like that of Kashmiri politician face from the central government over the years.
READ ALSO: Modi Govt's Strategy Behind Appointment Of Satya Pal Malik As J&K Governor
“Vohra’s removal was surprising. He was removed unceremoniously and without he having any prior information,” he says.
While Vohra was supposed to return on Wednesday on Eid, the Centre’s announced his replacement on Tuesday evening.
On Saturday, Vohra was scheduled to chair three separate meetings about aangwadi workers, mid-Day meal scheme and social security scheme.
Earlier, in June the BJP withdrew support from the Mehbooba Mufti led coalition government without informing her. The sudden announcement by the BJP’s central leadership came to a surprise for both the state BJP and the PDP. However, it was more surprising for Mehbooba, who was in the middle of a meeting at the secretariat.
For the past two months, there were speculations whether Vohra would get another extension or not. But of late, it was assumed that he would continue as the governor. Apparently, Vohra was himself confident about it and was taking meetings in the civil secretariat in Srinagar instead of the Raj Bhawan.
In his 10 years of as governor of Jammu and Kashmir, the state was placed under his rule for four occasions.
On June 25, 2008, when Vohra was appointed, he became the first civilian governor of J&K after Jagmohan since militancy broke out in the state in 1989. But soon, the PDP pulled out of its alliance with the Congress, and the Governor’s rule was placed in the state.
After the 2014 elections, when the PDP and BJP took three months to form an alliance, the state again saw the governor Vohra’s rule that ended in March 2015.
Former chief minister Mufti Mohammad Sayeed's death again become the cause for the promulgation of the governor's rule on January 8, 2016, after allies -- the PDP and the BJP -- deferred the government formation process for three months.
Vohra’s rule came to an end on April 4, 2016, after Mehbooba was sworn in as the chief minister.
Since independence, on eight occasions the governor's rule has been promulgated in the state. Seen as an able administrator Vohra remained non-controversial throughout his stint and he carried out development programmes in J&K.
“He was a political buffer which Delhi has taken away. We don’t know how his replacement will act,” says an NC leader. Vohra also didn’t come under pressure for the formation of any new government after the break-up of the PDP-BJP alliance.
Incidentally, when the Centre talked about having a tough approach on Jammu and Kashmir, Vohra in his Independence Day message said exactly the opposite. He said problems of the state can be resolved only through dialogue and discussions and by making sustained sincere efforts towards promoting reconciliation and communal harmony.
“Ever since I came to serve this state, I have been repeatedly urging that the pursuit of divisive and confrontationist approaches can never lead to the resolution of any of our problems. As we have seen for ourselves, such approaches have only generated vested interests which have fractured our society and severely damaged our centuries-old syncretic values and traditions,” Vohra had said.
New J&K governor Satya Pal Malik assumed the office as the 13th governor of Jammu and Kashmir after a formal swearing-in ceremony in Srinagar on Thursday.

As Waters Recede In Kerala, Miseries Of Victims Emerge Sharper