What explains the attack in which 16 people, were killed and 35 others injured when an alleged suicide bomber blew himself up inside the court of a senior civil judge at Quetta, capital of the Balochistan province of Pakistan on Feb 17? 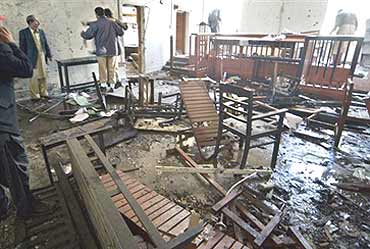 16 people, including a judge and six lawyers, were killed and 35 others injured when an alleged suicide bomber blew himself up inside the court of a senior civil judge at Quetta, capital of the Balochistan province of Pakistan, on February 17, 2007.Three police constables and several lawyers were among the injured. The attack was made while senior civil judge Abdul Wahid Durrani was hearing a case. He was among those killed. Claiming that the incident was a suicide attack, Balochistan Chief Minister Jam Mohammed Yousuf said that a man entered the courtroom and blew himself up. No organisation has so far claimed responsibility for the incident.

The Balochistan Liberation Army (BLA), which has been active for more than a year, generally attacks only infrastructure such as gas pipelines, power transmission lines, railway lines etc and occasionally members of the Security Forces. There was in the past suspicion of its involvement in explosions targeting some Chinese engineers working in the Gwadar Port construction project. However, it could not be definitively established whether the attacks on the Chinese engineers were carried out by the BLA or the Uighurs from the Xinjiang region of China. Moreover, it does not indulge in suicide terrorism.

Sunni terrorist groups such as the Lashkar-e-Jhangvi (LEJ), which indulge in suicide terrorism, generally target Shia Imambargahs, religious gatherings and processions. The pro-Taliban tribals of Waziristan, who are against the Army, generally attack members of the security forces, other public servants, tribals co-operating with the Government and high-profile places of importance such as hotels, airports etc. Terrorist groups do attack courts, but only those hearing criminal and terrorism-related cases. An attack on a civil court is unusual. Civil courts normally hear cases relating to property disputes, land disputes, personal disputes over marriage etc. One should not rule the possibility of this attack having had a personal motive, instead of a political or religious or sectarian motive.

Only details relating to the judge, the case he was hearing at the time of the attack, the background of the lawyers etc could help in ruling out a personal motive. The motive of the attacker remains unclear.