Chinese military are facing a revolt in Tibet the likes of which it has not seen since the Khampa revolt of the 1950s, which was ultimately brutally crushed by the military. Tibet is cut off, internet's blocked, as repression starts in Lhasa.

More from B. Raman
View All

The Chinese media has been silent on the situation in Tibet. In their daily briefings, spokespersons of the Chinese Foreign Office have admitted some protest demonstrations by the Buddhist monks in Lhasa, but have played down the gravity of the situation and have projected it as under control.

The only details to the contrary are coming from the CIA-funded Radio Free Asia, foreign diplomats in Beijing, foreign tourists caught up in Tibet, the offices of the Dalai Lama in different parts of the world and the Tibetan diaspora in India and the West. The Chinese have not yet been able to block the Internet as effectively as the Myanmar military junta did when the monks and students staged protest demonstrations in Myanmar last year. As a result, one has been able to get a regular flow of information till the time of writing of this article (10 PM Indian Standard Time on March 14, 2008). 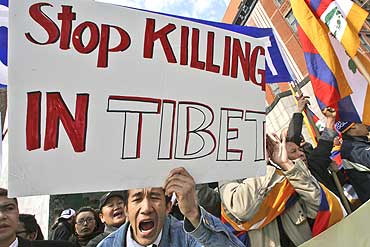 After allowing for some exaggeration and rumour-mongering in these reports, it is clear that the Chinese military are facing a revolt in Tibet the like of which Tibet has not seen since the Khampa revolt of the 1950s, which was ultimately crushed by the military. Initially, the trouble started with slogan-shouting demonstrations by the monks of three monasteries in Lhasa. They were peaceful and avoided violence. Repeated attempts by them to march in procession were prevented by the police--initially with the use of batons only and subsequently by using tear smoke. On the first three days (March 10,11 and 12), the protests were confined to the monks, with the general population showing little interest.

While the Lhasa Police, which has a mix of Hans and Tibetans, kept its cool and avoided using excessive force, Chinese army units, which consist mostly of Hans, lost their cool and opened fire on the demonstrators twice, resulting in at least two deaths. This infuriated the local people. More Tibetans joined the demonstrations and set fire to at least three military vehicles.

Initially, the monks were merely shouting slogans praising the Dalai Lama and calling for the independence of Tibet. The youth, who joined subsequently, shouted slogans against the railway line to Lhasa alleging that it was constructed with forced Tibetan labour and that many of them were killed during the construction. They were also demanding the release of the Panchen Lama designated by the Dalai Lama in accordance with the Tibetan traditions. He has been arrested by the Chinese authorities and replaced by a nominee of the Communist Party.

Most of the demonstrators have left the streets at the time of the writing of this report. Lhasa is relatively calm and the streets are deserted but for the security forces, who are patrolling intensely. It remains to be seen whether they demonstrate again tomorrow.

News of the firing incidents in Lhasa and the deaths have resulted in protest demonstrations in the rural areas too. The trouble is spreading from Lhasa to the interior areas.

The Chinese have been totally taken by surprise and highly embarrassed. During the last one year or more, they had sponsored the visits of many foreign journalists, including from India, to Tibet by the newly-constructed railway line. Some of these journalists duly impressed by what they were shown painted an idyllic picture of Tibet under the Chinese rule.

The Chinese authorities are reportedly worried that similar demonstrations might break out in the Xinjiang region, where the security forces have been put on stand-by alert.

In the meanwhile, elements identified with the Falun Gong have been spreading allegations that the infrastructure for the Olympics in Beijing were constructed with forced labour brought from the interior provinces and that many of them died in accidents and due to the harsh winter. They are trying to stir up demonstrations by these workers and their relatives in Beijing.

As I write, the latest is that the Chinese seem to have blocked the internet in Tibet effectively. Tibet is cut off from the rest of the world.

B. Raman is Additional Secretary (retd), Cabinet Secretariat, Govt. of India, New Delhi, and, presently, Director, Institute For Topical Studies, Chennai. He is also associated with the Chennai Centre for China Studies.