There's Fear Indian Democracy Could Metamorphose Into Illiberal One Based On Hindutva: Ansari 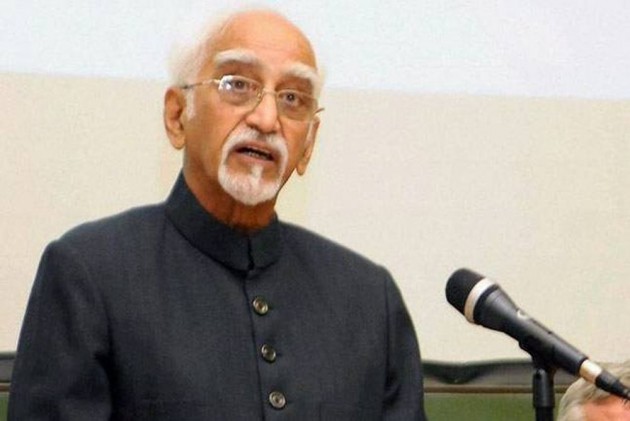 Former vice president Hamid Ansari today termed India's electoral democracy a "success story" but said there was apprehension that it could metamorphose into an "illiberal" democracy based on the principles of a socio-political philosophy called Hindutva.

Speaking at the launch of his book, he said "correctives" were essential, and it was the duty of the citizens and of the civil society to raise questions.

The book was launched here by former Chief Justice of India T S Thakur in the presence of former prime minister Manmohan Singh, CPI(M) Secretary General Sitaram Yechury and a host of other leaders.

Ansari said he is concerned as a citizen about the contemporary debate in the country relating to three things-- the principles of the ideological foundations of India, what is the condition of the institutional structure put in place by the Constitution, and the implications of these for the Indian democracy.

Talking about the book, he said, "Our electoral democracy is a success story, but it has not transformed itself into to a substantive, inclusive and participatory democracy."

There is apprehension that it could metamorphose itself into an "illiberal, ethnic democracy based on the principles of a socio-political philosophy called Hindutva, whose core concepts circumscribe the ambit of citizenship."

Ansari said his approach to his book "Dare I Question? Reflections on Contemporary Challenges" has been spelt out in the preface and he has raised the question "What is it to be an Indian?"

"This takes us firstly to the meaning of nationalism in the context of India's plural society, our composite culture and the resultant need to be inclusive and move beyond mere tolerance to the acceptance of diversity as a civic virtue," he said.

Political democracy as B R Ambedkar said a long time back must be based on social democracy, he said, adding that dissent is of critical importance in an open society.

"There is an evident decline in adherence to rule of law norms and the efficacy of institutions -- legislature, executive and judiciary. This has resulted in public disenchantment and is a matter of concern," Ansari said.

The book, brought out by Har-Anand Publications, is a collection of his speeches and writings, made mostly in his last year in office and some in recent months.

"The pre-launch publicity given to the book by the media tends to suggest that it might contain some version of a 'kiss and tell tale', nothing could be further from truth," he said.

Thakur, while speaking on the occasion, hailed the book as one of the "finest pieces of literature".

Talking about Ansari's address at National Law School Bengaluru where he spoke about unease among minorities, the former chief justice said they evoked responses and comments, some of them critical.

He said when you judge those comments you need to keep in mind that these remarks are coming from some who can is qualified to talk about how minorities feel in this country.

Thakur said Ansari has a clear understanding of the challenges facing the country.

He also urged the former vice president to pen his memoir next.

Political scientist Pratap Bhanu Mehta, in his remarks at the event, said terms of religious identities should be avoided and rights should be seen in terms of freedom and equality of all citizens.