'There Is Unanimity Among Political Parties'

So says the minister for social justice, on reservations in private sector, but then haven't we heard it all before on the other famous reservations for women? How the government hopes to implement this remains another imponderable, of course. 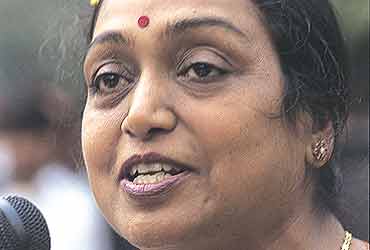 Nagendar Sharma : Have the reservations benefited the weaker sections of society, particularly the Dalits ?

Meira Kumar : :Yes, definitely. Historically our social composition has been dominated by caste issues, and a big section of the society has faced exploitation for centuries. Which is why the framers of the Constitution decided to take steps to bring these sections into the mainstream and for this, they provided for reservation in the educational institutions and in government jobs. But since this problem has existed for centuries, it would take more time to make these these sections socially advanced.

BBC listener from Delhi : Given the present caste equations of our society and the bias against backward castes, even the reserved posts in the government sector have not been filled up. Keeping this in mind, how far is it right to raise hopes for reservation in private sector?

Meira Kumar : You are right, the policy of reservation has not been fully implemented in the government sector and corporations--but, it has been to a large extent, and at least efforts have been made. I agree with the point that a change in mindset is required. I agree there is a backlog of vacant posts for the reserved category in the government sector, but let's remember that no policy howsoever good can be implemented if there is intolerance in the society. To remove this, education has an important role to play and the prejudices have to be got rid of.

Nagendar Sharma : But isn't it strange that the entire debate of social justice has been confined to reservation only, right from the days of framing of the Constitution till now ?

Meira Kumar : : It is not so. Affirmative action has been taken in this regard. The real problem in the society is intolerance. And see this is what most people tend to forget. To remove this intolerance successive governments for more than five decades of post-independence era have tried hard through education and other means. Let's remember that no society with intolerance has progressed -- and  education is the key to get rid of this menace.

BBC listener from Florida : Why does the government not review its outdated reservation policy based solely on caste criterion ? When this policy was framed, it was relevant at that time, but certainly not after 55 years. This policy has only allowed the rich among the Scheduled Castes and Tribes to become richer, creating a creamy layer, and those poor among them have been left out.

Meira Kumar : :This is a very common and misplaced notion. There are very few people who have reached what you people call the 'creamy layer'. If one generation of those, who were oppressed for years and decades, does well and reaches a stage where they can sit with other sections of the society, I do not think that we should have such an attitude and harsh words for those among the socially backwards who are doing well. I say reservation is merely a corrective action for the wrongs that have been committed against the socially backward people for centuries.

BBC listener from Jaipur : Now there is a talks for reservation for Muslims, but the question is there are backwards among the Muslims also, why is nobody thinking about them before talking about reservation on religious lines?

Meira Kumar : This is a matter which requires discussion, and then only would we be able to say anything on this matter. At the moment the UPA government under the leadership of Dr Manmohan Singh, has unanimously decided that social justice is important for private sector also, therefore we are at the moment working on that, and our understanding is reservation in the private sector would help the weaker sections of the society, who have already been contributing to the productivity of this sector.

Nagendar Sharma :Are you hopeful that the UPA government would be able to implement the plan for reservation in the private sector?

Meira Kumar : I am hopeful and the reason for this hope is that our private sector, especially the industrial world, has prominent people who have attained their education from prestigious world institutions and are very intelligent. I am addressing those intelligent people, and among them who are sensitive and tolerant. I am not addressing those who do not have a reasonable tolerance level. I feel that such people fully understand their commitments and responsibilities for the country, and for those who have been socially exploited for years. This is the reason for my hope, that the private sector would fulfil its social commitment.

Nagendar Sharma :By when does the UPA government hope to implement the reservation in private sector, and what are the chances of success?

Meira Kumar : :We would definitely be successful in this, and also it would not take long for implementation. We want to take everyone along with us on this, and build a consensus. A bill can be brought about, which can be done immediately, but it would be an imposing step -- this is not the way our government wants to work. We would build a national consensus.

We are taking the private sector and the industry representatives into confidence -- they know that the socially backward people have been contributing towards their production, and now is the time to involve them more and utilise their talent in a better way.

Nagendar Sharma : All the constituents of the UPA, and parties which are supporting it from outside, they are unanimous for this, but have you tried to build a political consensus on this? Are you talking to NDA and others?

Meira Kumar : : Yes it is on our agenda, but here let me inform you that on this issue discussions have already taken place in both houses of  Parliament, on a private members' bill and resolution. All political parties have supported this, there is unanimity among the political parties and there are no differences.

Nagendar Sharma : So the UPA government is working on consensus before bringing the legislation for reservation in private sector?

Meira Kumar : : We are not thinking about the legislation, we are working for consensus, we are not at all thinking about the legislation at the moment. Once the consensus is there, I think it would be a revolutionary and path breaking step for the country. I appeal to all the intellectuals, thinkers and responsible citizens of the country to help the government for this cause.

Nagendar Sharma : But madam how would you allay the fears of the industrial world, especially when there is already a debate that this would lead to a murder of merit, and some are arguing that reservation belittles merit. Example is of the armed forces, it is often said the armed forces are good because there is no reservation?

Meira Kumar : Merit is not a property of anyone and it is not a private property of any individual caste. To even say that SC/ST people are not meritorious is an exploitative statement and is an insult to them. For years in the private sector, backward people have been working as unskilled and semi-skilled workers. Has there been any problem till date? I think the whole point is about giving such people a chance. Those among them who have reached the apex institutions like IITs, have they let anyone down ? So other sections must give them a chance.

Nagendar Sharma : But why are the political parties not ready for the review of the reservation policy, so that the general category people do not feel that injustice is being done to them, by having reservations first for recruitment and then for promotions?

Meira Kumar : :I fail to understand as to why should we have such an opinion about those talented people in the SC/ST category, who have done well in 30-40 years of their lives. Please do not forget that their forefathers struggled for generations to live like human beings, leave alone respectable lives. If they are doing well, why should we think of pulling them back or stopping their progress. It goes back to the basic question of tolerance.

BBC listener from UP : There is no problem with helping the downtrodden, why does not the government provide reservation on economic criterion, which would help poor from all castes, and would end this age-old controversy, and why are Muslims being kept out of this?

Meira Kumar : There is no doubt that in our country we have an economic division, between the rich and the poor, but if we closely look this is a worldwide phenomenon. What is unique in our country is the social divide, for centuries the socially backward have been exploited. You would not find many examples like this in the world. It was for this reason that the framers of the constitution decided to eradicate this menace.  So far as your other question is concerned, five minorities have been identified, but this is at the consideration stage and I cannot divulge any details at this moment.

BBC listener from Gurgaon : Minister, don't you think that by implementing reservation in the private sector, only brain drain would be encouraged. How would you tackle that, people would try to go abroad rather than allow reservation in their enterprises?

Meira Kumar : :There is no conflict between social justice and development. I think without social justice, country's development cannot take place. Development of a country only takes place when every citizen of the country feels involved in it. Now if you have a large section, which does not get opportunities, and is left our, how can they contribute towards development? Giving equal opportunities and bringing into mainstream those who have been exploited for centuries would help in development and not hinder it.

Nagendar Sharma : But the reaction of the industry and main business bodies does not indicate they are happy with the proposal of reservation in private sector.

Meira Kumar : We are talking to the leading representatives of Indian industry and we are getting support from them. At the moment talks are on and I cannot elaborate further, but they have a high tolerance level, and that is the key. Those who are not tolerant are only responsible for discrimination in the society.

BBC Listener from Mathura : By merely providing reservation, I think that social backwardness cannot be removed, why does the government not make these sections aware about the benefits available for them? Only one-two percent have benefited so far and the plight of women continues to be really bad ..

Meira Kumar : One thing is clear, the benefits of reservation have to reach out to all SCs and STs. We would make all efforts towards this. I am aware of the problems of women, and do not forget that the Indian social structure has not been pro-women, be they forward or backward caste. But it is the Congress party that initiated the process of women empowerment. Remember it was during late Rajiv Gandhi's tenure that Panchayati raj bill that gave 33 percent seats to women was brought about. Now our endeavour would be for Parliament and state assemblies.