Their Man In Baghdad

The alleged ex-CIA and current DIA collaborator is widely viewed by the Iraqis and other Arabs as Iraq's Janos Kadar or Babrak Karmal, both of whom were installed in power, in Budapest and Kabul respectively, by the Soviet occupation forces. 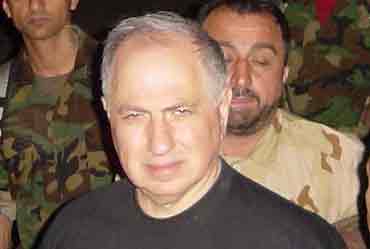 outlookindia.com
-0001-11-30T00:00:00+05:53
The indications till now are that having occupied Iraq, the US plans to install Ahmed Chalabi, allegedly a long-time collaborator, initially, of the Central Intelligence Agency (CIA) and, presently, of the Defence Intelligence Agency (DIA) of the Pentagon, as the head of the interim Iraqi authority, which would provide an Iraqi facade to the US military rule of Iraq.

Chalabi, a non-practising Shia and reportedly a close friend of the late Shah of Iran, the former Crown Prince Hassan of Jordan and Col. Oliver North of the Reagan Administration, whose name came to prominence in the 1980s during the exposure of the Iran-Contra scandal, is the head of the Iraqi National Congress (INC), which is a member of the anti-Saddam Hussein coalition clubbed together and funded by the CIA and the MI-6 and used by the Pentagon as its cat's paw in an attempt to cover its invasion  with the fig leaf of Iraqi support.

Having lived abroad since 1958, he knows little of Iraq and Iraq knows little of him.  He is widely viewed by the Iraqis and other Arabs as Iraq's Janos Kadar or Babrak Karmal, both of whom were installed in power, in Budapest and Kabul respectively, by the Soviet occupation forces.

The 58-year old Chalabi comes from an aristocratic family of Iraq, which was  close to the Hashemite monarchy installed in power by the British after the first World War.  His father had served the monarchy  as a member of  the Council of Ministers and as the President of the nominated Senate set up by the monarchy to give itself a democratic facade.  The Chalabi family  fled into Jordan after King Faisal II  was overthrown in 1958 by a cabel of army officers acting in collusion with the Iraqi Communist Party.

Chalabi, who was 13 when he fled from Iraq, spent his youth in Jordan, Lebanon, the UK and the USA, where he obtained a Master's Degree in Mathematics  from the University of Chicago.  He started his professional career as a Lecturer of Mathematics in the American University of Beirut.  He attracted the attention of the former Crown Prince Hassan of Jordan, who appointed Chalabi, then 32 years old, as one of the founding fathers of  a  bank called the Petra Bank, which expanded rapidly to emerge as the second largest commercial bank of  Jordan.

In August,1989, Chalabi fell foul of the late King Hussein of Jordan, who had him sacked after the bank had incurred huge liabilities and was on the verge of collapse.  This, however, did not affect his personal friendship with Prince Hassan, who allegedly helped him to escape from Jordan before the Police, on the orders of King Hussein, could arrest him for investigation into the alleged mismanagement of the affairs of the bank.  It was alleged that during his association with the bank he had embezzled nearly US $ 70 million and spirited it away in secret Swiss bank accounts. He was tried in absentia by a Jordanian court and reportedly  sentenced to imprisonment on a charge of embezzlement.

His spokesmen, however, strongly denied the allegations of embezzlement and accused the late King Hussein of being an agent of Saddam Hussein's intelligence agency and acting at the instance of Saddam Hussein to defame Chalabi because he had started an underground movement in Iraq to have Saddam Hussein overthrown and restore democracy.  They also claimed that the money, which he was alleged to have embezzled, was actually used by him with the knowledge of the King himself and the CIA to fund anti-Saddam Hussein groups inside Iraq. According to sources close to Chalabi, part of the money was also allegedly used to fund Col. Oliver North's travels abroad in connection with the Iran-Contra operation.

After fleeing from Jordan, Chalabi went to Europe and founded the INC in 1992 at a meeting of some anti-Saddam Hussein exiles held in Vienna, Austria.  James Woolsey, who became the Director of the CIA, after President Bill Clinton came to office in January,1993, made the INC the cutting-edge of the CIA's operations against Saddam Hussein.  Chalabi allegedly became his blue-eyed boy and the INC became the most favoured recipient of CIA funds meant for the overthrow of Saddam. During his brief tenure of about two years in office, Woolsey strongly held to the belief, which he holds even now that Ramzi Yousef, the principal accused in the case relating to the explosion in the World Trade Centre in New York in February,1993, was an agent of Saddam Hussein's intelligence agency and that the explosion was masterminded by the agency as an act of retaliation for the US role in the Gulf War of  1991.

In the beginning of 1995, Woolsey had to resign as the Director of the CIA after he came in for strong criticism in the Congress  for his alleged mismanagement of the investigation into the penetration of the KGB, the Soviet intelligence agency, and its sueccessor Foreign Intelligence Service of Russia, into the CIA, through Aldrich Ames, a senior CIA officer, who was subsequently  found guilty and sentenced to long terms of imprisonment.

The successors of Woolsey as Directors of the CIA (John Deutch and George Tenet) did not reportedly subscribe to Woolsey's theory of Ramzi Yousef being an Iraqi agent and did not share his enthusiasm for  Chalabi as the right man to help the USA in its efforts for a regime change in Iraq.  The State Department and the Pentagon too, under Clinton, shared the reservations of the CIA over the utility of Chalabi.  There were  allegations of Chalabi failing to submit the details of the expenditure incurred by him out of the huge amounts given to him by the CIA when Woolsey was its chief.

Despite this, the Clinton Administration made the CIA fund a 1996 foray by the INC and other ant-Saddam groups into Northern Iraq which ended in a fiasco.  Chalabi's forecasts that the Iraqi troops deployed in Northern Iraq would desert en masse and join the INC proved wrong.  Saddam managed to win over the Kurdistan Democratic Party, which made a separate peace with him Differences between the INC  and the Iraqi National Accord, a group of CIA-backed former Iraqi Army officers, led to their killing each other. Gen. Anthony Zinni, who was the Commanding Officer of the US Central Command, under Clinton, used to describe this as the Iraqi Bay of Pigs and sarcastically refer to Chalabi as " that silk-suited, Rolex-wearing guy from London."

Following this fiasco, the CIA, with Clinton's approval,  cut off its funds to Chalabi.  Despite this, Chalabi, who had settled down in the UK, remained a frequent visitor to the corridors of power in Washington DC and claimed to have played an active role in encouraging the Congress to enact the Iraq Liberation Act of 1998 calling for a change of regime in Baghdad.

He staged a spectacular come-back into Washington's good books after the Bush administration came to office in January, 2001.  In the 1980s, when he was associated with the Petra Bank in Jordan and before he incurred the displeasure of King Hussein, Chalabi, who was allegedly helping  the Mossad, the Israeli external intelligence agency, in the collection of intelligence about Iraq's arms procurements abroad, particularly from the USSR, used to visit Israel secretly.

During  those visits, he became close to the late Albert Wohlstetter (died, 1997),  who was reputed to be a godfather of the neoconservative movement in the US, which has a strong influence on the West Asian policies of the present Bush administration. Chalabi had earlier come into contact with him in his students days at the University of Chicago, but the friendship became close only after their meetings in Israel. Through Wohlstetter, he became acquainted with Richard Perle, who was Under-Secretary of Defence for international-security policy under President Reagan, Dick Cheney and Donald Rumsfeld, both of whom took turns in serving Reagan in his White House Staff.

These friendships stood him in good stead and helped him in his come-back.  Perle, as the chief of the Defence Policy Advisory Board, a position which he has since resigned, became a strong supporter of Chalabi, but the CIA and the State Department continued to have serious reservations about him. The CIA was reportedly disinclined to resume funding of Chalabi's INC.  It is said that Rumsfeld then ordered that the DIA should take him under its wings and fund the INC.

After 9/11, James Woolsey again started peddling his theory of Iraqi involvement in acts of terrorism directed against the USA, a theory which brought him close to the neoconservative establishment despite his having been a nominee of a Democratic Administration as the CIA's Director.  There were indications that neither the CIA nor the Federal Bureau of Investigation (FBI) shared his views, but this did not prevent Woolsey from emerging as one of the important dramatis personae in the events preceding the US invasion of Iraq.  He is tipped to occupy an important post in the US occupation regime in Baghdad to create a new Iraqi  intelligence agency, which would be loyal to the USA and protect its national interests.

As a result of these developments, there is now a curious position of the CIA and the DIA operating independently of each other in Iraq.  It is said that the CIA continues to fund the Kurdistan Democratic Party, the Patriotic Union of Kurdistan, the Iraqi National Accord, the pro-Teheran Supreme Council for the Islamic Revolution in Iraq, and an unnamed group, supported by Prince Hassan of Jordan, which calls for the restoration of the Hashemite monarchy in Iraq. The DIA has been funding Chalabi's INC.  The groups funded by the CIA strongly distrust the DIA-backed INC and Chalabi, but till now Rumsfeld has had his way.  Chalabi seems to have convinced Rumsfeld and Perle that it was his Shia followers in Baghdad who had come out in the streets and hailed the entry of American troops.

There are already indications of differences in the anti-Saddam Hussein coalition with those opposed to Chalabi accusing him of having secretly signed an agreement with the DIA that a Government headed by him would denationalise the oil industry in Iraq, thereby paving the way for its take-over by US companies and would reimburse to the US the expenditure incurred by it on the overthrow of the regime from the oil export earnings.  Teheran also nurses strong suspicions about Chalabi because of his alleged links with elements opposed to the Islamic Revolution in Iran.  It remains to be seen whether Rumsfeld would prevail in getting Chalabi installed as the head of the so-called interim Iraqi authority and if so, how long he would last.