'The West Is Developing Cold Feet'

The commerce and industry minister had made clear his opposition to the USA's refusal to offer more cuts in farm subsidies before he set out for the Doha round of trade talks that got suspended on Monday, 24/7 for that very reason. The line was clear 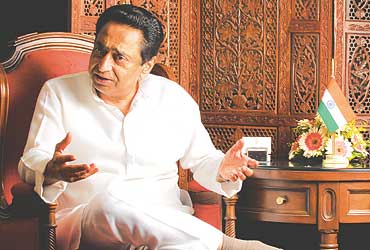 He has been in the eye of a storm ever since he staged a walkout on the first day of the recent three-day Geneva WTO mini ministerial meet, saying that there was "no negotiating space between the developing and developed countries" (on a day tempers flew high on the football field after Germany knocked Argentina out of the World Cup) and that "there was little that could be achieved by continuing the talks". The 56-year-old Doon School alumni and MP from Chhindwara (Madhya Pradesh), Kamal Nath isn’t the kind of person who pulls his punches. Among the tasks the Union Commerce and Industry Minister has been entrusted with since he assumed office in May 2004 has been the protection of the interests of India’s 650 million farmers and the country’s infant industries. And he seems to be taking up the cudgels for this. When Sonal Sachdev and Ashish Gupta met him in his well-furnished Udyog Bhawan office in New Delhi, there was a lot to talk about, from his WTO walkout to the recent SEZ controversy to free trade agreements (FTAs). Excerpts.

Why did you decide to stage a walkout from the Geneva WTO mini-ministerial meet?

This is the Doha Development Round of the World Trade Organization and its content is more important than its completion. Because it is a developmental round and it is our round and we can’t make it their round. The developed countries must understand that the rules of trade and the leverage that they got from trade have always been in their favour. And these countries, which are the champions of globalisation, are now realising that they are no longer globally competitive, whereas countries like India, which are becoming globally competitive, have started demanding that there should be no curb on globalisation. So they (the developed world) are looking at various ways and means to ensure that there is no change in this balance of leverage. So I said where industrial products are concerned, I am going to protect my infant industries, protect my automobile industry because no more can you make automobiles in Detroit and Stuttgart and sell them in India. You have to make your automobiles in India.

A time will come when the automobiles will be made in India and sold in Stuttgart and Detroit. This is how the trade winds are changing. So my position on industrial products is clear: tell me how much of your duties and tariffs you will reduce and as per the WTO principle, I will reduce it slightly less. If they say they will reduce it by 50%, then I will do so by 40%. But it can’t be that they do (reduce their tariffs) by 20% and expect us to reduce it by 70%.

As far as agriculture is concerned, the developed countries are looking for access into the Indian market with their subsidised product. But then it will not mean trade flows but subsidy flows. Indian agriculture is subsistence agriculture and livelihood security depends on it. And in the Hong Kong declaration, we have carved out in the agreement itself that there will be no duty reductions on those products which impinge upon livelihood securities, rural development needs and food security of the developing countries.

Now, they are developing cold feet and are trying to renegotiate. I have said that I cannot renegotiate the Hong Kong declaration or the existing framework agreement. On the other hand, the artificiality in the prices created by the subsidy regime is causing both price and trade distortion. That must go. Subsidy is a distortion not a tariff.

So what you are suggesting is that developed economies are increasingly turning protectionist?

What kind of subsidy reduction were you looking for from the US and the EU?

There are two issues in subsidy reduction. One is OTDS (overall trade distorting subsidies) and the other is tariff. The G-20 gave a proposal asking them—the EU and the US—to bring down domestic subsidies by 53% against their proposal of reducing it by 39%. They had indicated in Geneva that they also accept the G-20 proposal as far as tariff reductions are concerned. The EU was willing to reduce domestic support. However, the US proposal on domestic support really does not cut into their applied rates.

After your return from Geneva you told the media that you had gone to see "what the talks will bring for the Indian farmer and not what he had to give". What kind of relief were you expecting?

There have also been non-tariff issues like linking environment and labour issues to trade...

These are efforts by the developed countries to bring in conditionalities, to bring in subjects and issues which give them an advantage over the developing countries. They say that why should labour be paid so low. But then that’s my competitive advantage.

Do you think bilateral trade agreements will come in the way of multilateralism?

What about the concerns of the domestic industry regarding these free trade agreements?

Today, if we look at our trade with Thailand, it has gone up substantially. India is a large country and it needs to engage economically with other countries. Hence, our industries have to learn to be competitive but at the same time need to be given a level-playing field. Our industries’ demand too is that they should be given a level-playing field and we have no problems with that. Now that will mean resolving issues of inverted duty structure, remission of taxes and duties. All these have to be done, only then can bilateral trade agreements work. They cannot compete if they are disadvantaged.

But there are also some other bottlenecks—like infrastructure, rigid labour laws, etc—for the Indian industry?

Remember, there cannot be any pure level-playing field because in different countries rents will be different, infrastructure development will be different. But in a basic sense, we have to ensure that at the taxation levels, that the inverted duty structure should not have an adverse impact on the import of raw materials.

What do you feel about the industry complaints that many third countries are using FTAs to dump goods?

There is already a standard formula on value addition in our Thai and Singapore agreement. But there is always a question of misuse and abuse of the value-addition clause. And wherever there is misuse and abuse, our customs and field formations must stop it. In fact, there is a possibility of misuse in terms of violating a traffic light. Smuggling may take place, but that does not mean that we must stop doing it (entering into FTAs with other countries).

What about the services sector? Has there been any movement on Mode IV (free movement of professionals) in WTO?

We have moved on Mode IV. We have placed our new request. We are still negotiating on services, which have to be finalised by July end.

Have we accepted any formula such as the simple Swiss one for dealing with issues like NAMA
(non-agricultural market access)?

The issue is not about a simple Swiss formula, for it is only a mechanism. First, we have to look at what is the level of ambition of the countries. Only then can it be translated into a formula. In India, we don’t have much problems because our bound rates are very high, we have a lot of cushion, but there are other countries which can face a lot of problems. In India, our peak rates have come down to 12.5% and with the flexibilities available, we have no problem of coming down from our bound rates. First, you have to decide on the level of ambition and whether we arrive at it through a Swiss formula or a French formula or a German one is immaterial.

Moving to special economic zones (SEZs), how do you view the industry’s demand for flexible labour policy in these zones?
This is a matter to be taken up by the states although it is a central legislation. The state governments have to consider what works best for them. Several states have already given proposals for more flexible labour laws, which have been discussed at inter-state meetings.

It depends entirely on the states. The states must want it and the initiative must come from them. And whichever states want investments, they will have to see how these investments will come. Every state has to consider what is desirable in their context. So we can have a situation where some states have flexible labour laws while others don’t.

Critics argue that investments already planned by companies will now come into SEZs, so there will be little incremental investment. What’s your view?

The SEZ regime is largely export-oriented. So why should a company that wants to sell in the domestic market set up its office in an SEZ? So, I don’t agree with that argument at all. It will result in incremental growth because the SEZ model is a very specific one. So an SEZ investment is a very specific investment.

What about the revenue losses resulting from companies setting up manufacturing bases in SEZs?

Where is the revenue, where is the investment? It is only an imaginary loss. There is going to be incremental investment and also incremental revenue because income in the hands of the individual is not tax exempt. So it will lead to enhanced economic activities and enhanced revenues and hence it is good for the country.

Critics point out that SEZs are more real estate and tax play than anything else?

You need to build infrastructure and units and there is a limitation on how much you can build of this and of that (these were rules laid down by us). Besides, there is no opposition to SEZ. It was only a question of size, which was debated by the Group of Ministers who also said that it was the right thing. But you must make it viable. You can’t announce something and then put ingredients that would disable it. This ministry does not believe in that.

Do you see a significant increase in South-South cooperation in the near future?