The gravest threat to India's security is not Pakistan, not the ISI, not terrorism, but the limitless acts of omission, the venality and the ineptitude of the political and administrative executive, and the complete absence of accountability in the t 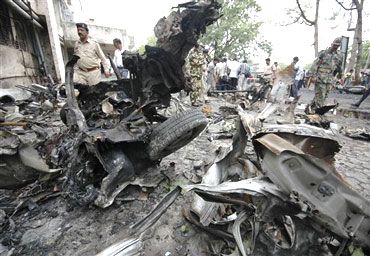 Another succession of bomb blasts have momentarily interrupted the national slumber, this time in Ahmedabad in Gujarat on July 26, and a day earlier in Bangalore in Karnataka -- both states, incidentally or otherwise, ruled by the right-wing Bharatiya Janata Party (BJP). Significantly, the last major serial blasts, on May 14, 2008, were in Jaipur in Rajasthan, another BJP-ruled state.

Seventeen explosions, occurring in rapid succession in a densely populated band along eastern Ahmedabad, killed at least 46 persons, and injured more than a hundred -- many of them critically, suggesting that the death toll could rise still further. The explosions occurred in areas of mixed populations, and included areas of high Muslim densities. No break-up of the religious distribution of victims is yet available, but it is clear that these would include a large proportion of Muslims.

The ‘Indian Mujahiddeen’ -- probably a front for a Harkat-ul-Jihad-al-Islami (HuJI) and Students Islamic Movement of India (SIMI) combine -- claimed responsibility for explosions in an email message sent out to media organisations minutes before the explosions. The email was traced back to an account held by an American corporate executive located in Mumbai, and initial reports suggest the account was probably hacked. The Indian Mujahiddeen has claimed responsibility for two earlier incidents -- the serial blasts in court compounds in Faizabad, Lucknow and Varanasi on November 23, 2007; and the serial blasts in Jaipur on May 13, 2008. While investigations are far from conclusive in both these incidents, there is a wide range of corroborative evidence that suggests that both these incidents were orchestrated by cadres drawn from the HuJI and SIMI. 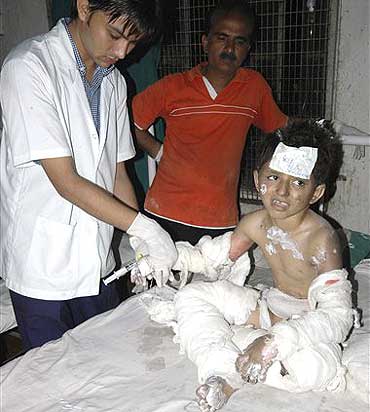 Two live bombs were also located and defused in Ahmedabad -- while two vehicles loaded with explosive materials were recovered in Surat in southeast Gujarat, some 294 kilometres from Ahmedabad, on July 27.

In Bangalore, a coordinated series of eight low intensity explosions killed one person and injured at least seven on July 25.

In their frenetic search for novelty, the media have discovered a ‘new sophistication’ in the serial blasts in Ahmedabad, and startling innovation in the fact that the attacks in Bangalore and Ahmedabad occurred on successive days. They also discovered the usual ‘prior warnings’ and ‘intelligence and police failures’. On their part, the central and state governments have called meetings of senior officials and made routine declarations of shock and expressed determination to confront terrorism.

All this is, of course, par for the course. The reality is, there is absolutely nothing new in the Bangalore and Ahmedabad serial blasts, other than elements of tactical detail -- which largely remain to be uncovered by investigations. As for the greater ‘sophistication’ of the Ahmedabad serial blasts, this is nonsense. The real genius of the serial blasts over the past years has actually been the extraordinary simplicity of operations -- relying on widely dispersed cadres, opportunistically drawn from different and often unconnected modules, and on locally procured explosives and materials -- which make the task of tracing linkages backwards virtually impossible.

Every new terrorist attack invariably provokes a flurry of hysterical questions in the media: What new strategies, tactics, groups are involved? Why here? Why now? Why? Alongside, a partisan and often perverse political debate is momentarily reignited: Was NDA rule more effective than UPA rule? Is the present government weak? Can we fight terrorism without POTA? Why is the President sitting on anti-terrorism laws in some states, when similar laws have received Presidential sanction in others?

But the principal question, invariably ignored, is: what has been done between the last set of major incidents and the one present, to diminish the likelihood of terrorist attacks? What is the measure and scope of capacity augmentation that has been realised? In all the discussions on ‘red alerts’ and ‘coordination committees’ and ‘beefing up responses’, this critical variable never comes up for discussion -- because the answer would be an embarrassing, indeed, humiliating, ‘nothing whatsoever’.

In the wake of the Ahmedabad blasts, the minister for home affairs, for the first time in the context of such attacks, demonstrated awareness of the fact that the country was severely under-policed and had meagre intelligence cover to deal with the challenge of terrorism. The reality is, India’s entire justice system -- from the Thana to the Supreme Court -- appears to be in a state of terminal sickness, incapable of imposing the law of the land, or of reacting to the rising challenges of violence and disorder in any timeframe that is relevant to counter-terrorism or counter-insurgency warfighting.

This, and not the minutiae of the latest terrorist attack, is the critical issue confronting the country.

Despite all the talk of -- and, indeed, investment in -- ‘Police modernisation’, moreover, Security Forces in the country are barely scratching the surface of this process. Of course, replacing a World War I vintage .303 rifle with an SLR or AK series rifle, or a 16 kilo bullet-proof vest with an 8 kilo bullet proof vest, constitutes an incremental improvement -- but this hardly brings the country’s forces into the spectrum of ‘modern’ enforcement agencies.

India’s police and intelligence forces -- with tiny exceptions -- remain overwhelmingly under-manned, under-resourced and primitive in their day to day functioning. The wide range of technology tools that have been applied to scientific policing in the West are not even known to the larger proportion of leaders in the police and security establishment -- and would sound like science fiction to the rank and file.

As has been repeatedly emphasised in the past , India has failed even to create a national database on crime and terrorism -- despite a mandate to create such a database and supporting organisational structures, including the Multi-Agency Centre and the Joint Task Force on Intelligence in the Intelligence Bureau, that dates back to 2001.

All this is well known -- or should be. There have been numerous and critical counter-terrorism and counter-insurgency successes across the country, and the tactics and strategies that have succeeded (or those that have failed) are again, well known -- or should be. What needs to be done is neither a secret, nor rocket science. Yet, year after year, with major terrorist attacks executed virtually across the country, the national and state leaderships have failed to initiate effective responses and to build capacities virtually across the entire spectrum of what is needed.

Our political leaders strut about imagining India as a ‘world power’, but the reality is that we have a crumbling political and administrative system that looks good only in comparison to near-failed states such as Pakistan and Bangladesh in our neighbourhood. The most urgent question that India must ask itself, today, is: How does a country, which does not have the administrative and technical competence to construct a half-way decent road transport system in its capital city, evolve the capabilities to confront and neutralize one of the most insidious ideologies and complex movements of political violence in global history?

The gravest threat to India’s security is not Pakistan, not the Inter Services Intelligence, not terrorism, but the limitless acts of omission, the venality and the ineptitude of the political and administrative executive, and the complete absence of accountability in the top echelons of government. Our greatest enemy is not only within -- it has captured and blocks up the highest nodes of power and decision-making in the country.

Unless these endemic and structural infirmities are addressed, the terrorists will continue to operate with impunity across the length and breadth of India.