Repeatedly cracking under pressure at the closing stages does not do credit to a team in any grade of hockey, leave alone an international side. Updates 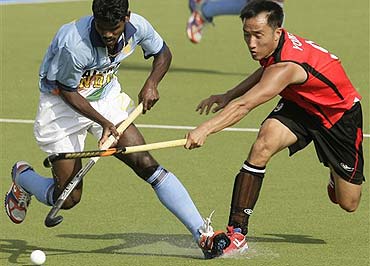 Repeatedly cracking under pressure at the closing stages does not do credit to a team in any grade of hockey, leave alone an international side. The habit of the Indian defence to concede late goals has now become an acute embarrassment.

India is on its way to play for the bottom four spots once again, after succumbing to pressure and conceding two goals in the last seven minutes that gave South Korea a 2-1 victory in the World Cup preliminary league match.

The way the Koreans negated their one-goal deficit to emerge victorious ought to be a lesson for us. Even when India was leading and the luck appeared loaded against South Korea, they never gave up. The Koreans kept their composure and mounted repeated raids, which proved too much for the shaky Indian defence.

South Korea almost forced penalty corners at will, testing the nerves of the Indian defenders who appeared at sea whenever the Koreans broke into the scoring zone. The way these Korean strikes weaved patterns in our territory would have rattled any defender, especially when the half-line was unable to put up a challenge.

That India was still leading by a goal just seven minutes from the hooter was a credit to goalkeeper Adrian D'Souza's brave effort of charging out to block South Korean drag-flicks on penalty corners. That was a big reason for the Koreans not breaching the Indian defence earlier than the 63rd minute.

It also helped India that South Korea's penalty corner drills were not quite functional, until late in the second session.

India could also count itself lucky that a penalty stroke awarded against them was later reversed by the umpires. That could have upset the Koreans' rhythm, but they showed themselves to be tough fighters.

No one would blame a team if it gives up after seeing so many chances go waste, but the Koreans realised they had the Indian defence under their spell. Their never-say-die attitude paid dividends in the end.

It is not for nothing that the Asian challenge in contemporary world hockey is spearheaded by South Korea, who announced their arrival on the international stage with a bang two decades ago.

South Korea first sparkled when they won the Asian Games title for the first time at Seoul in 1986, breaking the South Asian monopoly of India and Pakistan playing every final in the continental event. They have not looked back since.

Claiming the silver medal at the 2000 Olympics proved why the Koreans are so highly regarded in world hockey and are considered among the toughest rivals.

Many of the Indian players would have been aware of the grand comeback that South Korea made in the Sydney Olympic final against the Netherlands, when they scored two goals minutes from the end to tie the scores at the end of regulation period.

When you take on such rivals, you simply cannot leave gaps in the defence. India's defence posed no threat for the South Koreans, who were trying to make amends for allowing South Africa to hold them to a draw in the previous match.

South Korea are in with a chance of making the semifinals and their desperate thrust in the closing stages was to be expected. India should have bolstered its defence after watching it crumble in the final stages of previous matches.

With South Korea missing so many penalty corners, India could have increased their lead through frequent counter-attacks that opened up chances, but the strikers were not able to capitalise.

It was the same old story again, and we don't seem to be finding a solution for it. We are neither scoring goals, nor able to plug the gaps in our defence.