Guna is being represented by the Scindias since the first General Election in 1957. Of the 15 elections (including two by-polls) in the constituency since then, in only three was a non-Scindia elected. And on all the three occasions, not only no Scin 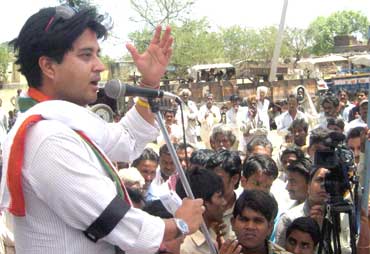 outlookindia.com
-0001-11-30T00:00:00+05:53
Even contemplating the possibility of a Scindia losing the electoral battle is considered blasphemy in Guna (MP). "If a Scindia is in the fray, he will win", is a maxim no one, absolutely no one, dares to question. Discussion is only allowed on the margin of victory.

The Scindias, who ruled this region for over 250 years from their capital at Gwalior, about 200 kms. away, are held in awe and reverence even 60 years after they ceased to lord over the kingdom.

"Srimant Maharaja Jyotiraditya Scindia" is contesting as a Congress candidate. He is the third generation Scindia to contest from here and his victory will be the thirteenth victory of a Scindia.

Guna is being represented by the Scindias since the first General Election in 1957. Of the fifteen elections (including two by-polls) in the constituency since then, in only three was a non-Scindia elected. And on all the three occasions, not only no Scindia was in the fray but also the victors enjoyed the backing of the "Mahal".

"No matter from which party they contest, no matter whether they come here or not, no matter who their opponent is, the victory of the Scindias is a foregone conclusion", says Mr. Yogendra Lamba, a businessman and an unabashed Scindia fan.

Scindia's poll team takes considerable pains to emphasise that his "Maharaja" status has not distanced Scindia from the people. "He has visited the constituency 928 times in the last five years", says an enthusiastic supporter--a clear exaggeration, for that would mean Scindia was here every alternate day.

His election managers dish out details of the "development" he has brought for the constituency. "The number of BSNL towers has gone up from 35 to 200, ITIs and Navodaya schools have come up and the district head Post office has improved beyond recognition", being some of the them.

Though Guna has been blindly backing the Scindias for over sixty years, the constituency does not have much to boast about, as far as development goes. This despite the fact that all the three Scindias--Rajmata, Madhavrao and Jyoritaditya--were quite influential in their respective parties.

Till five years back, Guna was not even on the railway map of the country. The town, say old-timers, has remained virtually unchanged since ages. It is still a picture of a typical mofussil town, when other urban centers in the state have changed beyond recognition. As one enters the city from the Agra-Mumbai national highway, narrow and dusty roads greet one. The city's hub is the bus-stand, which does not look like one at all. There is not even a proper shed where the waiting passengers can sit. No work has been done to beautify the city. In fact, garbage is dumped in the main market of the city.

The district fares poorly on almost every human development index. Only 18 per cent of the houses have toilets and only 15 percent have all the three basic amenities viz. safe drinking water, electricity and toilet. There are only 72 tractors per 10 villages and only 32 percent of the sown area is irrigated.

The situation is alarming as far as women, child and maternal health goes. Nearly 90 per cent of the deliveries are performed at home and over 78 per cent of women are not vaccinated against Tetanus when they go into labour in the Chanderi block of the district. In the Guna block, wedding bells ring for 79 per cent of the girls before their 18th birthday.

However, even his opponents concede, albeit grudgingly, that Scindia had done a real good job in trying to revive the dying art of Chanderi weaving--the traditional handloom product of the area. Thanks to his efforts, a UNIDO-aided "Bunkar Vikas Sanstha" now manages the manufacturing part while Fabindia takes care of the marketing. Weavers, who had migrated elsewhere for want of work, are coming back. "I have been to Pakistan and Nepal", says Afroza Jahan, 38 a weaver, proudly. She visited the trade fairs in the two countries to market the products under the auspices of the samiti.

The BJP nominee Mr Narottam Mishra, a minister in the Shivraj Singh government, is talking of lack of industrialisation of the area, of not a single factory having come up in the last five years and so on.

It is also trying to encash the inevitable disappointment of some. An example is Kailash Dhakad, a resident of village Chhatripura, who, he says, along with 35 other villagers, had decided not to vote for Scindia till 'we live". The reason? They went in a delegation to Gwalior, met Scindia and demanded that a tube well be got dug in their village. Scindia assured prompt action. Four years have elapsed since then but the tube well is nowhere in sight.

"The Scindias' are winning from here since decades but have not taken any step for the development of the constituency", says Kamala Bai of the same village. "They don't want the constituency to progress because then the people will be at their mercy and even seventy-year-olds will continue to touch their feet," she adds.

The key problem with the BJP is that having fielded the Rajmata from here for decades, it cannot now talk of feudalism, slavish mentality et al, the usual weapons for attacking former rulers. And that is more than reflected in its Shivraj Singh Chauhan-centeric campaign. "You cannot believe how popular Shivrajji is in the villages", gushes a party worker.

The Other Mrs Gandhi