...my invitation to the Augusta Masters. It has been my lifelong ambition to play at the Masters. Walking down the 18th green at the Chandigarh Golf Club in my early years, I would often tell my caddie about my dream. 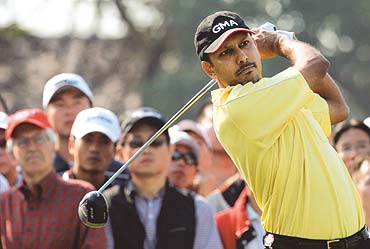 What a year this has been. Earlier this week, I got the perfect Christmas gift -- my invitation to the Augusta Masters.

It has been my life-long ambition to play at the Masters. Walking down the 18th green at the Chandigarh Golf Club in my early years, I would often tell my caddie about my dream of walking the 18th at the Masters and he would simply shake his head and ask me to get on with my hitting.

This week, I could not help thinking about all those moments, when the mailman handed me the envelope with the Masters invite. That capped a perfect year, the kind I have been dreaming about since the day I first picked up a golf club.

So, what has been the change this year? The most important change has been that I am more focused on my routine and processes; and that I have felt calm and composed, both personally and professionally. I am no longer result oriented; I just want to play my best and I know every time that happens I will be in contention.

I started the year feeling it would be great if I could get one win. And now when I am ending it, I have four wins and a place in world's top-40. It really has been amazing. On January 1, 2006, I set myself a goal of getting a win that had eluded me since 1999. I knew I had it in me but I was not ready to make any more goals till I attained this one first.

Right at the start of the season I came close in Pakistan when I tied for second. I knew I was close, but I did not talk about it to anyone except those closest to me. Then all things finally fell in place at Volvo China Open in Beijing.

When I walked off the 18th green my first feeling was one of relief -- the monkey was finally off my back. It was also a reward for hanging in there despite so many close calls. It was an emotional moment for me. I am ever grateful to my family, friends and all those who had stood by me in the tough years in between. I am quite strong mentally -- a gift I have from my father -- but it is still difficult when things are not going the way you want them to.

While getting ready for 2006, I had worked on some technicalities with my close friend, Amritinder Singh. The improvement showed. When I won Volvo China Open I got back my confidence. I had stuck to the process and maintained my mental strength.

Once that win was in the bag, a few doubts had been set right. Now I needed to reassess my goals. Now I was looking forward to a top-100 ranking in the world. I was getting great results -- regular top-10 finishes and Volvo China Open had put me on top of the UBS Asian Tour Order of Merit.

I was a little disappointed at not having made the British Open, but I did make the US Open and for the second time I made the weekend rounds. That gave me more confidence.

The Volvo China Open was the start. But the defining moment was the Volvo Masters of Europe. I had never seen the golf course at Valderrama, except on TV and the field was star-studded.

But the way things happened I was always in contention and on the final day I was proud of the way I played. The shots towards the end of the round especially on the 17th are something I will never ever forget. And there was a win, the biggest one of my career, waiting at the end of it.

The Volvo Masters of Europe is the biggest event after the British Open in Europe. And suddenly the whole world had opened in front of me. That night was one of the most emotional ones for me. My struggle and hard work seemed to paying dividends.

A place in top-100 was there, but now I wanted to carry on further. I came close to another win in Japan in the first week of November but ended second. That's when I felt I could pull of wins on three different Tours. I was playing a lot and my wrist was hurting a bit, but I was playing very well. I had committed to some events in Japan, which is where I have my big sponsors, GMA, who make my irons.

Then it happened again in Japan. I won at the Casio World Open. A week later I won again in Nippon Series JT Cup, making it four in a year and I was in top-50 of the world.

God, it was like a dream. I didn't want it to end. And it carried on till the Volvo Masters of Asia, which I wanted to win, if only to make it a unique Volvo treble. But I finished sixth, which frankly would not have sounded too bad at the start of the year. I was now 37th in the world.

The Asian Tour Order of Merit, the prospect of playing all Majors and WGC events and being chosen as the Players' Player of the year made it a dream year for me.

What of 2007? There is a saying that it is difficult to get to the top but even more difficult to stay there. I finished as No. 1 in Asia and No. 2 in Japan. I will be playing with the very best in 2007 on a regular basis. But I am not going to be overawed by emotions like making my debut at the Masters or playing with the best in the world.

There will be pressure to stay in the top-40 or get even better, but I am not going to put any pressure on myself. I am just going to get out there and play my best and let everything else happen by itself.

I know I have a whole lot of true friends out there backing me at all times and it is to them and my family and God that I want to be most grateful for all that happened this year.