The Nose, The Face

Who's in power in Kerala? The CPI(M)-led Left Front government. Who's in the Opposition? The CPI(M). In this fight between a party strongman and a popular chief minister the long term loser will be the party. 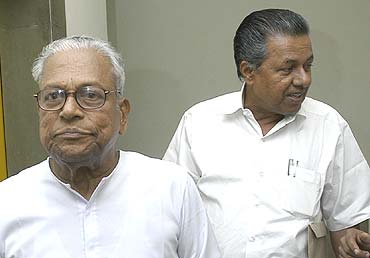 -- A comedian's take on the CPI (M) 's `cut your nose to spite your face' politics being played out in Kerala.

The politburo of the CPI (M) has at long last called a halt to the snake and mongoose tussle between two of the party's senior leaders in Kerala--chief minister V.S. Achuthanandan and secretary of the state unit Pinarayi Vijayan. But will the rap on the knuckles delivered by the central leadership ensure a lasting truce? Most political observers who have been keeping a tab on Kerala politics ever since the Left Front government came to power last year are agreed that the animosity is so deep rooted that it cannot be wished away.

Though the chief minister and the state unit secretary were suspended from the politburo after they traded charges over the demolition drive in the state, Achuthanandan has emerged the winner after a protracted 12 month long first round. The CM has at least been applauded by the central leadership for his good governance. No such cushion for Vijayan who did not expect to be so severely reprimanded by the party leadership.

So why did the CPI(M) leadership crack the whip? It was simply forced to because there was growing apprehension that the factionalism would eventually work against the party in its southern bastion. Also, more importantly, it became clear that Achutanandan, who will turn 84 in October, still enjoys popular support; while Vijayan, facing allegations of corruption, is perceived to be pandering to business lobbies and trying to take the CPI(M) away from its core ideology. So the CPI(M) leadership could not be seen as siding with him anymore.

Nothing proved the chief minister's popularity more than his recent demolition drive across the state. It is not often that razing of buildings are applauded. But Achuthanandan's effort had public approval because his targets were not the poor living in hutments but corrupt businessmen who worked the system to their advantage and had grabbed government land to build hotels and business establishments.

The drive spared no one. Powerful state officials who appropriated government land saw the constructions they had put up go under the bulldozer. Even the CPI office in Munnar was not spared. At the end of the day, Achuthanandan emerged as a courageous man and a hero. His take on the drive was that it was carried out to reclaim government land which belonged to the people.

Sensing that public sympathy was on the CM's side, the politburo did not take kindly to a statement by Vijayan that the chief minister was being built up as a hero by the "media syndicate". The reference was to Malayalam papers which the CPI (M) state secretary alleges is funded by the CIA and other anti-people interests. Of course, no one in their right mind believes that CIA agents are parked in Thiruvanathapuram to destablise the Left government. And even if they are, it doesn't serve US interests to get a favourable press for a hardboiled Marxist chief minister like Achuthanandan.

While the CPI (M) leadership was harsh on Vijayan, it must be pointed out that it remained a silent spectator for a year even as the state unit president did everything to undermine the authority of the chief minister. Stories were planted against Achuthanandan and a coterie of ministers emerged who allegedly acted on Vijayan's orders. On issue after issue, Achuthanandan was made to look ill informed or stupid. Files, like the ones relating to an ADB loan, were sent to Delhi despite clear cut instructions from the CM that it could only be forwarded only after he took a look at it.

The CM withstood all this stoically. His trump card was public support. Indeed, Achuthananadan may not have made it to the CM's gaddi but for his mass appeal. Though he had led the election campaign which saw the Left return to power, there was talk of appointing someone else as the chief minister. But finally the politburo had to give VS his right due. If it did not, it would have met with strong public disapproval.

One can only hope that the factionalism ends here. But the feedback is that both sides are quietly plotting ahead of the organisational elections due in August. In this fight between a party strongman and a popular chief minister the long term loser will be the CPI (M).

'A Fight To The Finish'