The Nexus With Terror

Sadly, little attention has been paid to the insights the expulsion of Pakistan Charge d'Affaires offers into the funding and organisation of terrorist activity in Jammu and Kashmir. 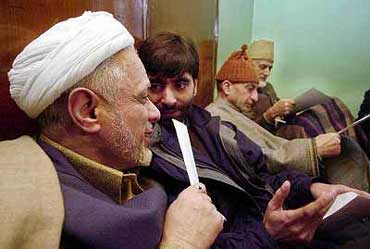 India's decision to expel Pakistan's Charge d'Affaires, Jalil Abbas Jilani has widely been read as merely an unusually dramatic manifestation of the historically bitter relationship between the two countries. Little attention, sadly, has been paid to the insights the event offers into the funding and organisation of terrorist activity in Jammu and Kashmir.

Jilani was asked to leave India on February 8, after the Delhi Police formally filed documents charging him with passing on Rs. 370,000 to Anjum Zamruda Habib, a key member of the far-right women's organisation, the Khawateen Markaz. The money, police investigators say, was to be passed on to Abdul Gani Bhat, the head of the principal anti-India political coalition in Kashmir, the All-Parties Hurriyat Conference (APHC). The APHC's representative in New Delhi, Sabir Ahmad Dar, was also arrested along with Habib.

Pakistan, perhaps unsurprisingly, denies all the charges levelled against Jilani. Since he enjoys diplomatic immunity, and since Indian intelligence is unlikely to ever make public the material gathered during surveillance of the Pakistan High Commission in New Delhi, the whole truth about the affair will possibly never be known.

The fact is, however, that there is a long history of direct funding of the APHC by Pakistan's intelligence establishment, often funnelled through the High Commission. As early as 1997, an investigation by Frontline magazine found that top APHC leaders Abdul Gani Lone and Syed Ali Shah Geelani had received funding to the tune of several million Indian Rupees a month from Pakistan, often ostensibly gathered by shadowy charities, and then sent to India through Hawala traders. In at least one case, detected by the Indian Army in May 1997, it emerged that Geelani had directly sent such funds to elements close to the Hizb-ul-Mujaheddin (HM).

By 1998, Indian officials were becoming increasingly aware of the sheer scale of such funds transfers - as well as of official Pakistani complicity in them. In that year the Jammu and Kashmir Police discovered that the Pakistan Embassy in Saudi Arabia had been passing money to the Hizb-ul-Mujaheddin through Jamaat-e-Islami affiliated charities like the Kashmir Medicare Trust and the Muslim Welfare Society. Mohammad Nazir, an ethnic Kashmiri employed in the Pakistan Embassy in Jeddah moved the funds through a Dubai-based businessman of Kashmiri origin, Mohammad Shafi Mir. The Hizb also regularly received funds gathered in the United States and United Kingdom by activists like Ayub Thakur and Ghulam Nabi Fai.

This, of course, excludes regular payments to the families of terrorists killed or arrested by Indian forces, as well as funds for anti-India political activities. The APHC itself files no tax returns, but runs offices in New Delhi and Srinagar, funds the domestic and international travel of its leaders, and pays salaries to some 40 employees - a not inconsiderable expense. Although terrorism in Jammu and Kashmir was in part financed through local revenues, the inevitable alienation of potential supporters by forced levies has led to a growing dependence on funds from Pakistan. Organisations like the Jamaat-e-Islami, the Lashkar-e-Toiba (LeT) and Jaish-e-Mohammed (JeM) raise substantial public funds in Pakistan.

It is unlikely, however, that donations would meet the enormous costs they incur in Jammu in Kashmir, especially in a political terrain transfigured by the events of September 11, 2001. Even though visible public fund raising has stopped in Pakistan since those events, the funding of terrorism, quite obviously, continues. Indian intelligence has identified at least fourteen major funds transfers since December 2001. The dependence of the APHC on Pakistani cash helps explain the persistent unwillingness of key members to engage in any kind of meaningful dialogue with India. Supposedly 'soft' constituents of the APHC leadership are often punished by having their funds choked off, a strategy that was instrumental in the displacement of the pro-Independence Jammu and Kashmir Liberation Front (JKLF) by the pro-Pakistan Hizb-ul-Mujaheddin in the early 1990s.

Some APHC leaders, interestingly, seem to have personally benefited from these transfers. Geelani, for example, faces income tax proceedings for having massive undisclosed income. Although his sole legitimate source of revenue is a modest pension - earned, ironically enough, for his tenure as an elected Member of the Jammu and Kashmir Legislative Assembly, which he entered after swearing allegiance to the Constitution of India - the ailing politician has managed to procure a lavish house, owns several vehicles, and runs his establishment with the aid of several well-paid personal servants. Other APHC leaders and their immediate relatives have benefited similarly. In the wake of the 1997 Frontline exposé, former APHC member Shabbir Shah confessed to having parked funds intended for armed activities in a series of property acquisitions, mainly in southern Kashmir.

Why would Jilani have personally handed over funds to the APHC? Two explanations are possible. First, a series of arrests of Hawala traders and funds recipients have made the business of transferring money increasingly hazardous. Equally important, the Gulf Emirates are increasingly under pressure to curb the informal movement of cash from their countries, destabilising the trade as a whole. Moreover, and perhaps more importantly, the Pakistan High Commission may wish to maintain a direct presence as a sponsor and patron of secessionist politics in Jammu and Kashmir - Jilani's cash was described as a nazrana, or gift, to Bhat. Whatever the truth, the events of February are just a very small part of a very large, and very sordid affair.