The Man Behind The Music

I'd see a wistful contradiction in him. When he'd speak to me, he'd often speak of being "lonely, sensitive and misunderstood". This changed to "arrogant, self made, and wilful" when he was meeting others. 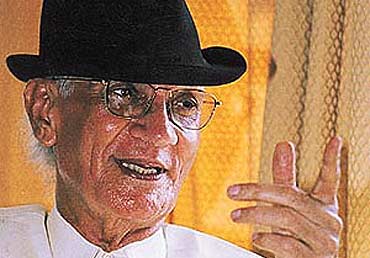 I was already a fan when I met O.P. Nayyar — in typical filmi fashion. At a party at Holiday Inn, a hotel in Juhu, I found him staring at me. I knew who he was, but wondered why he was staring at me till he finally came up and told me I reminded him of someone called Rashida he had known in Lahore. I was thrilled to get the opportunity to tritely tell him I was a huge fan of his music. He smiled and invited me to meet him. I took him up on that and, in the last 15 years, had several occasions to meet and speak with him—the last being as recently as the 16th of January 2007 when I called him in Hyderabad to wish him on his birthday. He assured me he had never been fitter, had never felt better, but asked, at 82, what could he look forward to?

Over the years, whenever I met him and referred to his music,  he’d always say "I can’t believe I made these. I feel so completely away from it all ."  But whenever I took anyone to meet him to talk about his music—and this happened fairly often because he refused to meet people he didn’t know—he would oblige. Several times I got conned by people who’d ask me to introduce them to Nayyar sa’ab. A wannabe sycophant with starry expectations wanted OP to be part of his TV series, but OP refused. This man from the Mumbai TV industry finally requested me to use my good offices and bring OP to the studio, and also to do the background research for the show for a fee. OP came, as he put it, "because you are asking me",  gave a charming live interview, but the man never paid up. OP said when I recounted this to him, "People of his type are dotted all over the industry. They’re like pus boils—yeh kya paise denge. in fakiron ko to hum daan dete hain!"

I loved his astringency. OP never minced words. Once he asked me to accompany him for a recording of Sa Re Ga Ma, the music show on Zee where several old time composers were present, and he kept me  in splits with such nuggets as "We used to call this one Master Pedro because he stole all the Spanish or Mexican tunes, and that one was...", pointing to the various eminent personalities there. It was hilarious and embarrassing, particularly as I knew all of them closely.

Another time, an editor from Delhi who is also an MP, requested me, through his live-in girlfriend, to introduce him to OP. Again OP said he’d meet them only if I came with them. I demurred as I’d have to go to Thane where he lived and take a day off from work. But OP was adamant. I told the editor’s girl I couldn’t take a day off from college for this. So they decided to bribe me and asked me to do the interview as they just wanted to meet him. I agreed. Once there, the editor asked OP, "You composed some songs for Lata, didn’t you? Then why did you stop?"  Throughout the drive, this editor was willing to bet anything that his knowledge of music exceeded mine, so I was shocked when he asked OP such a foolish question. When they left, OP said succinctly, "That funny man is your editor? How do they land such jobs… don’t they believe in doing any homework?" He had sized them up—"they’re living together aren’t they?" His perspicacity at all times was both funny and amazing. That was OP straight as a ramrod, both literally and figuratively.

When he spoke of Asha Bhosle, I’d turn beetroot red. He’d tell me so many anecdotes of their time together But he never criticised Lata or ran her down — but you could never unearth the real reason for their not working together. I’d egg him on with rumours I’d heard — he had called her [Lata] for a recording at his Famous Studio music room, she came, but was a little late and he refused to allow her entry. OP heard me out but just refused to be provoked into replying merely saying, "Her voice was too thin, my kind of music required a more sensual fullbodied voice like Asha’s" I admired the fact that he had only praise for Lata though.

His face always shone and once I asked why and he replied, "I recite the Gayatri mantra.. it is a very powerful mantra.". The story that OP’s earlier favourites, Shamshad Begum and Geeta Dutt, were ignored by him when Asha started singing for him, always upset me. I am a huge fan of Geeta Dutt and I asked OP why he had dropped Geeta when she desperately needed money. She had even called him up and asked him why he was not using her voice any longer. OP replied, "Asha had made it clear that she would be "everything" in my life and I was so besotted by her that I just dropped everyone else. I do know that Geeta needed work badly but I was in the grip of this relationship and I didn’t respond to her."

OP never tired of reiterating that he was an arrogant man. He was also extremely hot tempered. He loved the good things of life and was a giver, even though I can count instances on my fingers when he’d tell me, "See I don’t need publicity. If people want to meet me and write about me, they must pay me." I’d see this as an expression of the fact that he probably didn’t have an income coming in. But he’d also say that he got the highest amount of royalty from HMV, so it was difficult to know what his exact financial position was in his last days.

I’d see a wistful contradiction in him. When he’d speak to me, he’d often speak of being lonely, sensitive and misunderstood. This changed to arrogant, self made, and wilful when he was meeting others. This sense of self, this holding on to his dignity was another facet of him which made me wonder at the façade he put up; the "I don’t give a damn for anyone" attitude, though he craved company. He was always conscious of the huge debt to the Nakwa family, specially Raju the girl who looked after him for over a decade.

He was kind and magnanimous. I suffer from diabetes and a minor heart blockage and this worried him so much that he’d mix homeopathic medicines for me and command me to come and collect them from him. He’d worry about how to present himself when I was taking anyone to meet him and for days before the event he’d ring me up early in the morning and say, "I shall wear my suit and hat". If I said it wasn’t necessary to dress formally at home, he’d explain why it was necessary and then suddenly relent and await us in his gorgeous silk lungis and kurtas, and play the benign host.

But the name OP Nayyar is synonymous with the most joyous of all music ever heard. So let’s move from the man to his work, though both are equally interesting. By his own admission, he had had no training in music at all, but he loved music, loved KL Saigal Ghulam Haider Shyam Sunder, Anil Biswas, RC Boral, Pankaj Mullick and ingested all he heard from them. This led him to believe that he could compose too. Living as he did in pre-independence Lahore, he got to see all the New Theatres films which were very popular in those days when Hindi cinema was still young. He’d spend all his time and money watching films, loafing at the cafes of Lahore and dreaming of making it big,

He sang because everyone sang those days and landed himself singing assignments on radio from the age of 8. His family, particularly his strict father, made no bones about his dislike for the boy’s activities. This opposition at home made the boy even more stubborn and eager to prove himself. He managed to get a record of two of his compositions in the market. People began to know him. He used the money to indulge his fancy for rich clothes, drinks, and women. Just as luck seemed to be favouring him, Partition took place. His family left Pakistan, but OP being stubborn, refused to go . He hoped things would settle down and he’d be able to remain in his beloved Lahore, but fate decreed otherwise. He had to leave for India.

After a series of jobs — as music teacher, as radio host, as a singer on the radio — he finally got a film to compose. But it flopped. Destiny though seemed to have a plan for him. His first three films as composer — Aasman, Baaz and Cham Chamacham — flopped before he got Guru Dutt’s Aar Paar and this proved providential. Like the name, he decided it would be aar or paar for him after this, and sure enough, the film was a massive hit establishing him at the top immediately. This was in 1954, and from then onward till 1960 he rose higher and higher.

It must be emphasised that OP Nayyar’s rise had nothing to do with playing politics or kowtowing to the powers that be. He rose to the top on his own terms. He refused to work with established lyricists as he considered people like Sahir Ludhianvi very arrogant, he chose unknown names to write for him . He threw out Rafi for not being punctual and replaced him with Mahendra Kapoor, till Rafi apologised to him. He never used Lata Mangeshkar who was at the top. He broke every industry norm and succeeded too.

Slowly though, newcomers came in, Asha left him, his arrogance made producers turn to others just to prove him wrong and his work in the industry dwindled. It was the industry's loss completely. In 1972,  he gave the fabulous ’chain se hum ko kabhi aapne jeene na diyaa.". Again in the 1990s, he tried to compose for Nischay and Zid, but nothing happened. He lived a life of almost total oblivion till the coming of the satellite channels on TV saw him back in the circuit. His voice was heard again nostalgically. But he had alternate professions for himself viz Homeopathy and Astrology. He had predicted his own exile and death. And he remained to the end—truly arrogant. He died as he lived—a journeyman with his bags packed and ready to leave whenever the call came.

The truth is that he didn’t compose, he had no training. He just tuned into the soul and drew out magical melodies that connected at once with his listeners. His songs lack effort — they are spontaneous expressions of gay abandon, of joyous moments of romance; of the thrills and frills of life—of the fine embroidery on a dress, not the dress itself; or a trimming on a jacket not the heavy jacket but the gossamer light trimming that makes all the difference.

Born on 16th January 1926 he was an emphatic earth sign, He loved all the good things life offered. Is it at all surprising that he passed away as he was laughing at the programme Laughter Challenge on TV?

Of Oriental Princesses And White Slags