In Bihar, it has been an era of history-sheeters and 'muscle-men' MLAs and MPs for the last two decades or so. Only the 'fittest' among these manage to survive. 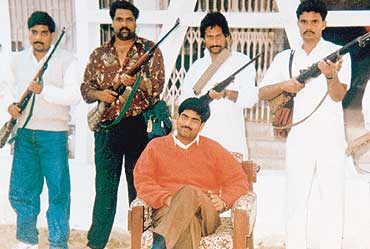 It is not possible to survive in Bihar politics without muscle-power. Even those MLAs who are not history-sheeters seem to be coming around to adopting this mentality. But what is surprising is that even the ‘muscle men’ express worries about dangers to their lives. MLA Anwar ul Haq is apprehensive because of a similar threat. Or so he informed the  Bihar home secretary in December 2002. Haq has many cases against him, but he blames it on political vendetta.

As it is, for the last two decades or so, in Bihar, it has been an era of  history-sheeters and 'muscle-men'  MLAs and MPs. For a long time, ‘heavyweights’ like Rakesh Ranjan alias Pappu Yadav and Shahabuddin  have been representing the people of Bihar in the Lok Sabha. Their deeds are well-known. As of now, Pappu Yadav is in jail, implicated in the murder case of Purniya MLA Ajit Sarkar, with a record that is hair-raising. No less extraordinary is the record of RJD MLA Shahabuddin. His name was in the headlines when police commissioner A.K. Singhal was shot at and in the murder case of JNU student union leader Chandrashekhar. Like others, Shahabuddin too has been taking the plea that the charges against him are concocted because of  political reasons.

Along with Pappu Yadav, MLA Rajan Tiwari was also charged with involvement in the murder of MLA Ajit Sarkar. The case is still in the court. Like Pappu, Tiwari too has claimed victimisation by the administrative machinery.  Rajan’s good friend Suraj Singh alias Surajbhan, also an independent MLA, has criminal cases filed against him from Patna, Begusaray, Mokama, Vaishali, Mujjafarpur and Gorakhpur (Uttar Pradesh). Most of these are section 302 (i.e. murder) cases. His name also figures in the murder of ex-minister and MLA Brijbihari Prasad.

Samta Party MLA Narendra Kumar Pandey alias Sunil Pandey has a long history sheet as well. Another MLA Manoranjan Singh alias Dhumal has murder as well as countless other charges to his credit, with his ‘influence’ stretching to areas in eastern Uttar Pradesh. Dhumal first went to jail in 1977, and has been notorious since the murder of Gautam Gwala in 1984, though he has all along denied all the charges against him. Independent MLA Vijay alias Munna Shukla is no less notorious.

This list would not be complete without mentioning MLA Ramkishore alias Rama Singh, Suresh Pasi and Zakir Anwar Bairag (who shifted from BSP to RJD).  Just for the record: two state ministers in the Rabri government - Aditya Singh and Sanjay Singh -- had to lose their jobs due to entanglement in murder charges.