This article was originally published in Outlook Traveller, in its December 2002 issue.

My cricketing career kept me on the go a fair bit. I’ve travelled to every continent, and I’ve spent most of my years in four places—Bhopal, from where my mother hailed; Pataudi, the family seat, about 60 km from Delhi; the UK, where I studied; and Delhi, where I now live. But if there’s one place I can think of as ‘home’, it’s Pataudi.

I was born in Bhopal in 1941, and my childhood days were divided between there and Pataudi. My father, the Nawab of Pataudi, had executive authority over the area until 1947, when he, along with the heads of other princely states, signed the Instrument of Accession, on the eve of Independence. 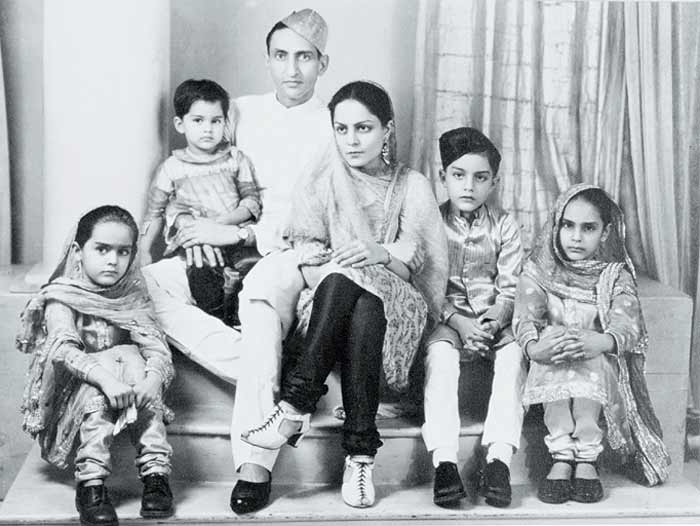 With his parents and three sisters

My three sisters and I were taught at home, in the palace, for the first few years. The routine, however, was pretty well set: breakfast on time, study hours, play sessions, lunch, and so on... I used to play all kinds of games—cricket, hockey, foot­ball—with the people of the village and the household staff. There were a lot of children around the house, and we’d all be rushing about, into and out of the zenana, to which—as a concession to our age—we had unhindered access.

I learnt to ride and shoot fairly early. It was a sort of rite of manhood—as soon as a boy-child was able to stand, he’d be saddled on a horse. We’d start off on small ponies and go round in circles, learning to lead with the correct foot. Our drillmaster was very strict, and had the Nawab’s authority to enforce discipline.

Discipline was emphasised fairly strictly, although only my mother resorted to any form of corporal punishment. She would whack us with the back of her hairbrush: that memory is vivid, so it must have been a pretty strong brush! 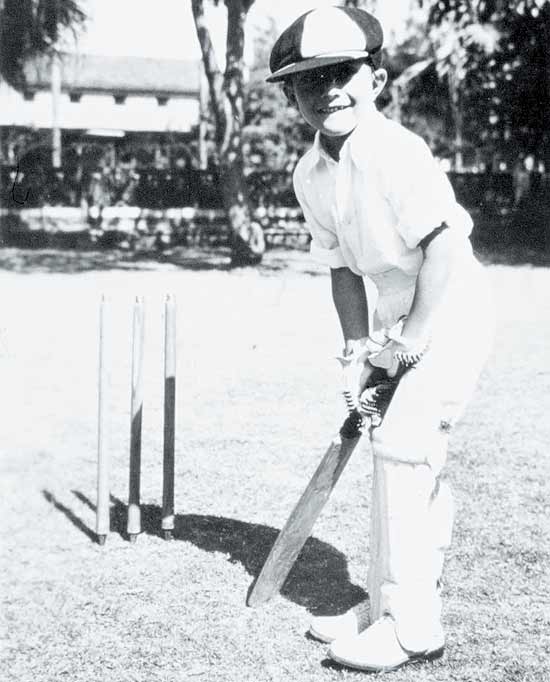 We spent many happy hours with our parents. I used to play a lot with my father or go on walks with him. I suppose it was during these interactions that I imbibed the liberal values to which he adhered. When he was away on cricket tours, we’d all move to Bhopal, where my maternal grandfather was Nawab. Bhopal was a larger state than Pataudi, and interactions even within the family were governed by protocol—my mother would have to seek an appointment with her father through the ADC. We’d get all dressed up in our topis and go over and conduct ourselves with as much decorum as five- or six-year-olds could muster.

Pataudi was close enough to Delhi for us to come over often—to watch films or visit relatives. We’d take a train from Pataudi station to the Army Cantonment, which did not take long. (Years later, I declared open the Pataudi end of the Delhi-Gurgaon highway, which cut down the commute time to about an hour.) We used to have a Pataudi House in Canning Lane. On occasion, we’d stay there for a few days and then troop back to our pastoral seat.

As Nawab of Pataudi, my father organised the state’s annual Ram Lila festivities, and even after Independence, he was unfailingly invited to be chief guest. These weren’t as elaborate as today’s festivals, and were rather more informal. As children, we’d all take part—we’d be called upon to fire the flaming arrow or stage performances. The local darzi played Hanuman, and even those of us kids who weren’t performing would just hang around with Ram or Lakshman, or latch on to Sita’s sari and follow her around... As Nawab, my father was responsible for maintaining law and order. A Hindu-majority area with a history of communal harmony, Pataudi itself was untouched by the Partition riots, but its peripheral areas were affected. I remember us climbing to the palace rooftops to see the fires in nearby areas. My father would be required to go out in the middle of the night to address some problem or the other.

After Independence, my father got a job in the External Affairs Ministry, and we moved to Delhi. I was sent to Welham, in Dehra Dun, where I spent three years.

On January 5, 1952, my 11th birthday, my father died of a heart attack while playing polo in Delhi; he was 42. The Indian government recognised me as his successor, but I was merely the titular head. It was my mother whom the family recognised as its head, which was an honour, with social and financial obligations to the family and the Pataudi community. By then, in any case, the nawabship was without executive authority, which is why I wasn’t exactly weighed down with royal responsibilities...

That same year, I sailed to the UK to enrol in prep school. My sisters—who were to be schooled in Switzerland—and my mother accompanied me. On board the ship were West Indian cricketers returning from a tour of Australia, and some Indian players who were off to play the Lancashire league. They’d played with my father, so some of us— including Sonny Ramadhin and Vinoo Mankad—ended up playing cricket on the decks with a tennis ball. 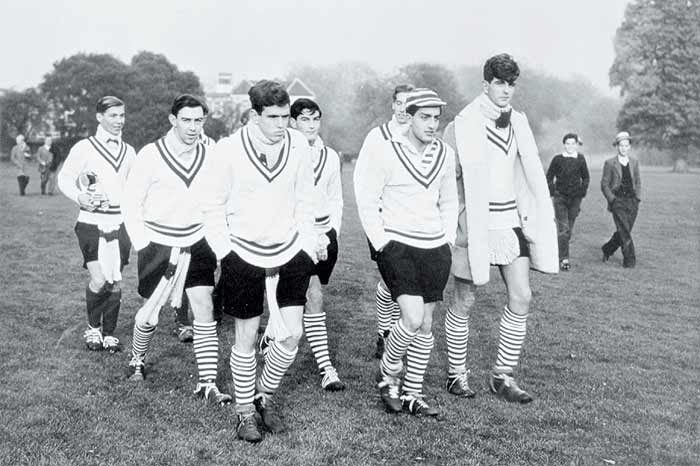 At prep school and, later, at Winchester, the main school, I acquired some distinction as a sportsman—at cricket, football and racquets. I enjoyed no special privileges and received—and later administered—the corporal punishment that was the norm in British schools. There was a fair bit of fagging that went on: you’d have to clean the shoes of the Prefect or get his breakfast ready, and if you slipped up, you could be caned. Only one concession was granted me: for fear that I might contract pneumonia, I was excused from swimming lessons in the pool, which had a thin film of ice in the winter. The first boy to jump in would break the ice.

My cricket coach at Winchester and one of my Masters both played for Sussex, and were keen to get me to play for the country. I played my first first-class match for Sussex in 1957, as a 16-year-old still in school. In 1959, I enrolled at Oxford, and continued to play county cricket—with rather more distinction than I brought to bear in my academic pursuits. By 1961, I was heading the batting averages in England; my cricketing career seemed set to go places. But the motorcar accident in 1961, in which I lost my right eye, changed all that...

Back in India after taking a year off from Oxford, I played my first of 46 Tests, a period in my life that has been sufficiently chronicled... 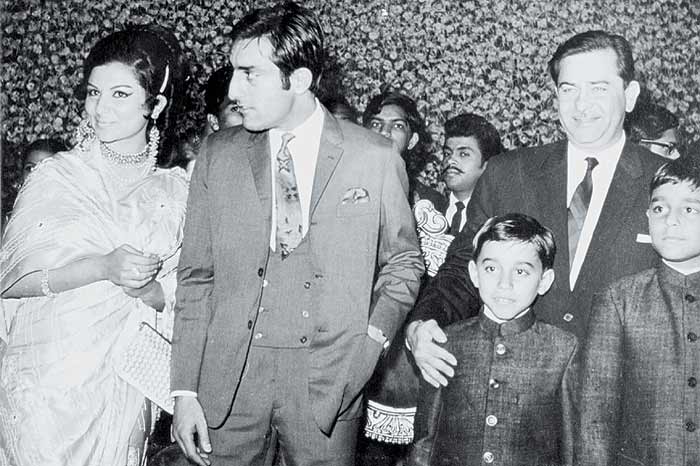 Towards the end of 1968, after what I consider my best cricketing year, Sharmila and I were married. Whatever concerns our families may have had were papered over pretty quickly. Perhaps because there are some values common to both families. My family’s cultural and literary background isn’t, of course, quite as awesome as the Tagores’—we don’t, for instance, have a Nobel Prize winner in our family. We are basically Afghans with a bit of Turkish blood who came down a few hundred years ago as glorified mercenaries, rushed around on our horses and occupied and made space for ourselves. Over the years, we’ve become a little more sophisticated. I received a liberal education and imbibed secular values from my father, which I’ve tried to give my children.

Likewise, many of the Tagores had a liberal, often unorthodox attitude, free of bigotry or rigidity in religious matters. Both our families were independent financially—and that’s important: we did not depend on a community of supporters. And some of the Tagores were not so far off from us in their origins, in the sense that they also came from elsewhere— from East Bengal to Calcutta—looking for opportunities.

After the wedding, Sharmila and I lived in Bombay. There was quite a lot of space in the marriage: there was no question of my stopping her from acting, and no question of her asking me not to go on tours... Before the wedding, her family had told her: “You’ve got no chance with a nawab.” And my family had told me: “You’ve got no chance with an actress.” Well, here we are, 35 years later, still together.

Perhaps because I got an overdose of it in my cricketing years, I don’t quite fancy travelling extensively any more. I do go to Europe on occasion—and whenever I’m in England I drop by at Lord’s to meet old friends and catch up on...no, not cricket, but our personal lives. But wherever one may go, Pataudi, the state that’s no longer ours, draws me repeatedly. I’m here fairly regularly: you can find me here wandering around with a book. It isn’t just the place, it’s also the relationships that it has nourished for generations now. I guess that’s why it’s ‘home’, and will always be.

As told to V. Venkatesan