The initiative for an Indo-Pakistan anti-terrorism co-operation mechanism is ill-advised, ill-timed and ill-examined. Terrorists and their masters will misinterpret it as battle fatigue in New Delhi, particularly in the PMO and MEA. 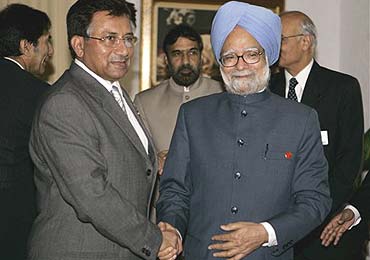 I was highly disturbed to hear a retired Foreign Secretary say on a TV channel: "We do not seem to be making any headway in our fight against terrorism. This (the mechanism) may help." These remarks will be misinterpreted in Islamabad as an admission by a retired Foreign Secretary that the Indian security agencies have proved themselves incapable of controlling jihadi terrorism. Let us take the help of the Pakistani agencies and see whether that helps.

Ever since Pakistan was born in 1947, ill-wishers of India in Pakistan--governmental and non-governmental, jihadi and non-jihadi--have shown a penchant for misinterpreting and misreading India's mind and launching adventures, which took us by surprise, but ultimately proved disastrous for them. Those adventures were of a conventional kind such as the wars of 1965 and 1971 and the Kargil conflict of 1999. In matters of conventional conflict, we always had the upper hand.

The post-Havana misreadings of our state of mind and morale following the Mumbai blasts of July 11,2006, are likely to result not in another conventional conflict, but in a further escalation of acts of jihadi terrorism in Indian territory and further flow of innocent civilian blood, with dangers of fresh tensions in the relations between the majority and minority communities. This escalation would be partly at the instigation of Pakistan's Inter-Services Intelligence (ISI) and partly at the initiative of the jihadi terrorist organisations themselves and their supporters in India.

The present initiative for an Indo-Pakistan anti-terrorism co-operation mechanism is ill-advised, ill-timed and ill-examined. I have always been an advocate of liaison between the Indian intelligence agencies and those of even our adversaries. The Indian intelligence, with the clearance of the political leadership, had maintained a liaison with its Chinese counterpart even before the relations between the two countries started improving in 1988.

They did produce results in respect of the Siachen issue. They also helped in Pakistan returning to India some Sikh soldiers posted in Jammu & Kashmir, who had deserted and crossed over to Pakistan. Those meetings were preceded by weeks, if not months, of careful examination of the likely implications and preparations in some of which Rajiv Gandhi himself actively participated. We were in a position of equal strength, if not superior strength, before we embarked on those meetings. This strength came from our successful development of a psywar capability against Pakistan and developing our own covert cards, which we could use against Pakistan's Sikh and Kashmiri cards, as Mrs.Benazir Bhutto used to call them. These cards, which we played effectively, did contribute to making Pakistan realise the folly of its role in Punjab. However, even these cards did not produce any substantive results in J&K and in respect of Pakistan's role in the radicalisation of sections of the Muslim youth in the rest of India through organisations such as the Students Islamic Movement of India (SIMI).

These arrangements were allowed to peter out after 1991 because of Pakistan's insincerity relating to jihadi terrorism. When Narasimha Rao was the Prime Minister, the Clinton Administration, using the channel of the Central Intelligence Agency (CIA), then headed by Mr James Woolsey, suggested to India to set up an anti-terrorism co-operation mechanism with Pakistan's Inter-Services Intelligence (ISI). It did not take off because Narasimha Rao was not in favour of it.

In 1997, we threw away our covert card in a moment of misplaced generosity towards Pakistan and we have already paid a heavy price for it. However, we continued to retain the Psywar card. At Havana, the Prime Minister and the Foreign Secretary designate have thrown away even the Psywar card. This is likely to cost us dear.

The media has quoted a senior officer of the Ministry of External Affairs (MEA) as saying that the mechanism with Pakistan would be similar to the Joint Working Groups on Terrorism, which we have established with over 20 countries and that there would be nothing special about it. It is not that simple. The other countries with which we have established this mechanism are not adversaries of India. They do not wish ill of India.

There are three components to anti-terrorism co-operation--intelligence sharing, joint operations and grant of mutual legal assistance. We should not be naive enough to think that intelligence sharing and joint operations will have any meaningful role in the proposed joint mechanism. Even before 9/11, all countries of the world except Pakistan were extending mutual legal assistance to India. Pakistan has never extended mutual legal assistance to India even though a dedicated mechanism for this purpose exists through the INTERPOL. What is there in the proposed new mechanism, which will bring about a benign change in Pakistan's attitude of non-cooperation?

The worst of jihadi terrorism is not behind us. It is ahead of us. The Indian Police and security agencies are making valiant efforts to control the jihadis despite lack of satisfactory political backing from the leadership and operational backing from the Foreign Office. Their difficulties are likely to increase as a result of Havana.

Pakistan is a theocratic State founded on the belief that Hindus and Muslims cannot live together. We may call ourselves a secular state, but the Pakistanis look upon us as a Hindu State. If we think that a State with such beliefs will genuinely co-operate with us against jihadi terrorism, we will be living in a world of illusions.