The Halo Of Hypocrisy

Tens of thousands of people have died in Syria over the past year and Obama’s red line was never quite violated. What makes a chemical weapon a red line and not armed drones, heavy munition bombs, mines, depleted uranium shells, mortar and cluster bo 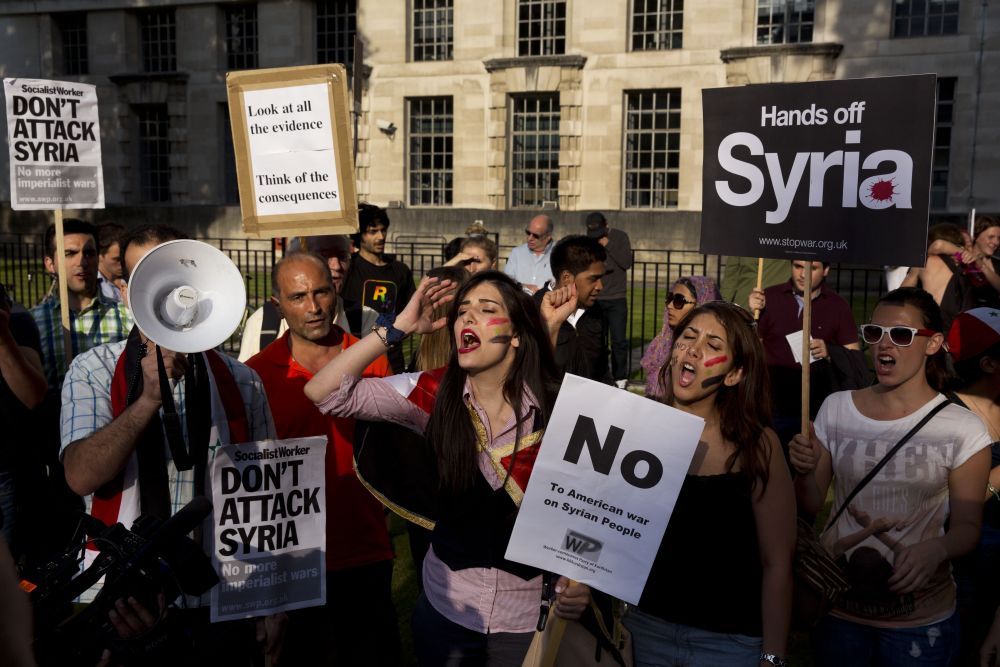 At best, governments are amoral entities. At worst, they are immoral. Formed from a large number of individuals, each with their own views of right and wrong, as well as other private interest groups, it is impossible to conceive of a government as a moral actor. Ultimately, its interest is defined by its quest to consolidate and perpetuate its own power. Secondly, and perhaps equally, the interests of the nation state, not to be confused with the people who form the nation, guide it.

In light of the horrific chemical weapons attacks in Syria recently, it is then galling, although not surprising, that a vocabulary of moral superiority was deployed by the representatives of a nation that has not only created and invested money in creating weapons of mass destruction but has also used them, sold them and continues to sell them on onto third parties.

Secretary of State, John Kerry, described the events in Syria as “a moral obscenity…that should shock the conscience of the world.” He added, “It defies any code of morality.” What Mr. Kerry says about the horrendous loss of life is absolutely true. However, the next statement and its logical concomitant, military intervention in Syria by a consortium of various powers, makes one wonder what the source of this moralising is when it clearly exhibits such historical amnesia. Mr. Kerry warned: “President Obama believes there must be accountability for those who would use the world’s most heinous weapons against the world’s most vulnerable people.” This too is an admirable sentiment but then one cannot help but wonder: Who will hold the United States accountable for the use or supply of said chemical, biological and nuclear weapons in nearly every decade of the last 70 years?

Sixty-eight years ago, Hiroshima and Nagasaki were devastated by two atomic bombs and the effects of those are still felt today with children who are born with deformities and other health issues. Incidentally, Israel was forced to apologise for the remarks of its online spokesperson Daniel Seaman who called annual commemorations of the events ‘self-righteous’ and while addressing the Japanese said ‘you reap what you sow.’

In the 1960s and 70s, 8 million tonnes of napalm was used with deadly effect in Vietnam. Napalm is a gelatinous substance that when ignited sticks to anything and burns at temperatures of more than 815 degrees and cannot be put out with water or any other substance. The US army also sprayed 20 million gallons of herbicides and defoliants, including Agent Orange, which not only killed a large number of people but wrecked havoc on ecological systems so that people even today are born with birth defects.

In the 80s, the US, and a whole host of European countries supplied Saddam with the wherewithal to expand Iraq's nuclear capabilities and also provided various chemical and biological agents. These were used not only on the Iraqi Kurdish population but also against Iran and their effects are still visible today. As with any other country, there is no dearth of sane voices in the United States although often these are marginalized. As American diplomats Flynt and Hillary Leverett noted in their compelling recent book Going to Tehran that Iran chose not to weaponise their missiles with chemical agents despite facing attacks by said weapons in the first Gulf War. In the most recent Iraq war, white phosphorus and depleted uranium shells were used by the US army leading to affects that have had horrific effects on civilians and will continue to plague coming generations as the example of Vietnam has already proven.

In light of these various examples, it is then inconceivable to assume a higher moral ground. All these attacks are well documented and the evidence is there for all to inspect. Were the weapons used not ‘heinous’ and were the victims not ‘vulnerable?’ In addition to the use of weapons of mass destruction, there is a historical precedent for selling these weapons to those deemed allies. So it is not entirely inconceivable that the rebels, as UN investigator Carla del Ponte said in May, might have used sarin gas and other toxic agents. Although forming a relatively small part of the opposition, there are certain rebel outfits that are comprised of the very militant Islamists who have wrecked havoc in Afghanistan, Iraq and North Africa and have been patronised by other Arab countries that are in turn allies of America. These are the very people who have also slaughtered— quite literally— prisoners and feel no compunction in beheading people on camera. It is not unthinkable then that they might use any means possible to further their cause.

Today, there seems to be an aversion towards highlighting the double standards and hypocrisy that is so openly practiced by many countries in the world. People who do choose to remind others of these are either thought of as conspiratorial, are labelled right-wing or left-wing nuts (depending on the issue at hand) or indeed dismissed for being naïve, irrational and not understanding the intricacies of realpolitik. The fact is however that it is imperative to remind people of the appalling crimes, for many of which, no one has been held to account, because as has been proven countless times war only leads to more war. Just a few days ago Obama asked the Department of Justice for immunity for George W Bush and many of his advisors in a case that alleges that the war in Iraq violated international norms.

The reality is that if the United States, European countries and various Arab states, for their own geo-strategic interests, want to invade Syria then no one can stop them. However, invoking morality for their cause is an affront to the hundreds of thousands of people, from Iraq to Vietnam, who are living proof of the use of such ‘heinous weapons.’ Tens of thousands of people have died in Syria over the past year and Obama’s red line was never quite violated. What makes a chemical weapon a red line and not armed drones, heavy munition bombs, mines, depleted uranium shells, mortar and cluster bombs? Just recently, despite an international condemnation of cluster munitions and a treaty which, of course, was not ratified by either party, the United States sold Saudi Arabia cluster bombs worth about $641 million. Cluster bombs are widely regarded as indiscriminate as they put civilians at high-risk risk.

The fact is that this civil war has to be resolved through diplomacy and negotiation because a failure to do so will only protract the conflict and in the long-term lead to more regional instability. Many Muslims see the war in Syria in sectarian terms rather than as the struggle of a brutalized people against a tyrannical dictator and often those very people who have highlighted and protested against American atrocities in the past now want America to intervene in Syria. This too is a double standard that does not bear up to moral scrutiny for as Hannah Arendt eloquently wrote, “the hypocrite’s crime is that he bears false witness against himself... Only crime and the criminal, it is true, confront us with the perplexity of radical evil; but only the hypocrite is really rotten to the core.”

How can baying for blood stop further bloodshed?

After The Arab Spring