The Gowda Merry Go Round

What made Deve Gowda and Kumaraswamy go back to the BJP? Or have they gone back at all? The answer lies somewhere in-between the two questions. 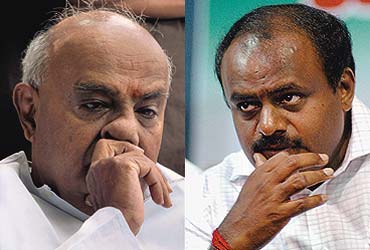 What made Deve Gowda and Kumaraswamy go back to the BJP? Or have they gone back at all? The answer lies somewhere in-between the two questions.

According to sources close to the Gowda family, the 'game' of going back to BJP has a two-pronged motive. First and the most important one is to escape the charge of 'betrayal' that the JD(S) was facing after it reneged on its promise to transfer power to the BJP on October 3. The swell of sympathy for the BJP had unnerved the family. Second, it was to ensure that the JD(S) has a decent chance at the hustings. Even a week ago, it appeared that there would be a straight contest between the Congress and BJP if elections were to happen in the near future. JD(S) was being counted out. Therefore, Gowda had to work himself and his sons out of this doomsday situation.

Also, what preceded Gowda's about turn was the attempt of a section of the state Congress to split the JD(S). It was openly stated that the Congress was willing to join hands with the JD (S), provided the Gowda family was kept out. That was like an open bait to JD(S) MLAs to rebel against Gowda. To counter the 'Congress machinations' the wily Gowda is said to have pulled out from his bag an 'extreme trick' of going back to the BJP.

But Gowda's going back to the BJP is only 'grandstanding.' There is neither conviction nor compulsion. Being one with a decent understanding of constitutional law, he knows there are enough hurdles before the governor and the UPA government to be able to invite the BJP to form a government. "He also knows that it would be a tough decision for the secular-alliance at the centre to permit the first BJP CM to take charge in the South, especially in the context of the Gujarat polls and the Tehelka expose," says the family source. To top it all, there is Gowda's own letter to the governor, PM and president, requesting them to dissolve the Assembly and prevent horse-trading. Even after the JD(S) pledged support to the BJP, Gowda has not withdrawn this letter or written a fresh one correcting his position. Gowda has now made it appear that if BJP does not get power this time around, the blame squarely lies on the Congress and UPA.

Why did the centre give room for Gowda to play this game? Why did it not dissolve the House the moment BJP had withdrawn support and Kumaraswamy had resigned in the first week of October? The Congress' official explanation is that the  centre was only following procedure laid out in the context of the Bommai judgment. But in reality, top sources in the Congress admit that a deal was being worked out in which Dharam Singh would get back the chair he lost and JD(S) would install its deputy CM. But a lobby within the Congress is said to have played spoilsport. "Gowda gameplan will be upset only if the Centre allows this remarriage between JD(S) and BJP to happen," says a JD(S) leader.

Something else that remains unanswered is why did the BJP, which fully understands 'Gowda's treachery' fall prey to the game? Especially when public sympathy was on its side? Even a day before the remarriage happened the powerful Bellary brigade of the BJP, which had been raided by the IT department, had used the most heinous terms to describe the Gowda family. BJP MLAs had made communally-charged statements at Bababudangiri as the Datta-mala ceremony drew to a close. BJP state president, Sadananda Gowda, had said that they could easily prove the Rs. 150-crore bribe charge against Kumaraswamy. After all this, why did they rush to the Raj Bhavan on October 28? It is reliably learnt that even the RSS was keen on this remarriage. "They may want to shore up their resources before the general elections," is one explanation offered by a symapthiser.

The credibility of politicians in general and Gowda family in particular has slid very fast in recent years, but this latest incident is about discovering new lows for the state. Every party has been quoting the Constitution to make their point, but sadly without realising its spirit.

'Beyond The Pale Of The Rule Of Law'