A bad week for Gen. Musharraf turned progressively worse as first Washington trashed his peace plan with tribes along the Afghan border to bits, and then the Pakistan Supreme Court voided his decision to suspend Justice Chaudhury in March. 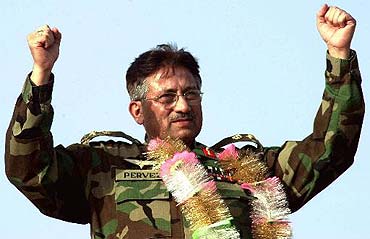 Washington: The decision by Pakistan's Supreme Court to reinstate Chief Justice Iftikhar Mohammad Chaudhry will weaken President Pervez Musharraf and complicate his election strategy, according to some analysts. Others say it may actually strengthen the general by taking the lawyer unrest off his plate and allowing him to focus on a role he's best suited to play – that of an Army man going after terrorists.

What started off as a bad week for Gen. Musharraf turned progressively worse. First, Washington tore his peace plan with tribes along the Afghan border to bits, blaming it for allowing al Qaeda and the Taliban breathing space to regroup. Then came the Supreme Court decision, voiding Gen. Musharraf's decision to suspend Justice Chaudhury in March.

Husain Haqqani, director of the Center for International Relations at Boston University, says the ruling demonstrates the unwillingness of Pakistan's civilians to endlessly obey the military's commands. He believes Gen. Musharraf now has two options: "He either recognizes the reality and moves towards reconciliation with civilians or continues with his concept of 'unified command', which would only plunge Pakistan deeper into crisis."

Ambassador Teresita Schaffer at the Center for Strategic and International Studies in Washington points out that the ruling "dramatically complicates" Gen. Musharraf's election strategy. For Gen. Musharraf to remain in uniform the National Assembly will be required to extend the current waiver of Pakistan's constitutional ban on those "holding an office for profit for the state of Pakistan" from running for election. "That legislation will be challenged in the courts," Ms. Schaffer says, predicting the courts are likely to strike down the legislation.

Not everyone agrees Gen. Musharraf has come out a loser in his standoff with the judiciary. In fact, says Marvin Weinbaum of the Middle East Institute, the ruling will boost the general. Had the court ruled in his favour, it would have energized the opposition, Mr. Weinbaum said. "With this crisis behind him, Gen. Musharraf can now take a clear shot at the extremists. The army's honour has been challenged [by the Lal Masjid crisis] and he will focus his attention on the militants."

Mr. Haqqani admits Gen. Musharraf could focus on the militant problem and see the court judgement as a blessing in disguise because it ends a crisis of his own making. "But that is not Musharraf's personality. He suffers from a messiah complex, believes the army alone has the right to run Pakistan and is very self-righteous," he says. "He will read this judgement as a snub and will most likely get into further confrontations with the judiciary as well as other elements of Pakistan's civilian society."

Lisa Curtis at the Heritage Foundation agrees the reinstatement of the chief justice removes an immediate source of protest among the civil society and political parties. However, she says, the political situation remains extremely fragile, and respite from the protests may not last long, particularly if Gen. Musharraf tries to move forward with his original plan of getting himself re-elected by the sitting five-year-old parliament and refuses to remove his uniform by the end of the year.

"He has lost a great deal of credibility with the Pakistani public over the judicial crisis and although there seems to be general support for his decision to confront the extremists at the Red Mosque, it is unclear whether that has translated into a boost to his overall popularity," she says, adding, "The problem, however, is that the political parties need to understand that the Red Mosque confrontation appears to be the beginning of a showdown between al Qaeda backed extremists and the Pakistani state. No one should be naive to the fact that the extremists are trying to exploit the political uncertainty in the country."

Pointing out that over 180 Pakistani civilians and military personnel have been killed in attacks in the past week which seem aimed at provoking chaos and weakening the Pakistani state, Ms. Curtis said, "If there was ever a time that the mainstream secular parties and the military actually needed to work together for the sake of stability in Pakistan, now would be it."

The developments are unlikely to shake support from Washington for Gen. Musharraf, a trusted ally who signed up for the war on terror after the September 11 attacks on America.

At the State Department, spokesman Tom Casey said the court's ruling was a "positive resolution" of the situation. "It was a decision that -- not insignificantly -- was not the position that the president had taken, but that nonetheless the president and his government showed respect for that institution, and for the rule of law by saying they accepted it," he said, adding Gen. Musharraf was a useful ally.

Mr. Haqqani suggests Washington rethink this alliance with Pakistan. "The United States has to recognize that the strongman they have been supporting so far is not as strong now as he was earlier but there are no visible signs of a substantive change in U.S. policy at the moment."

"Sooner or later, however, U.S. policy makers will have to face the reality that there is more to Pakistan than Musharraf and once that realization reaches the higher echelons of decision-making in Washington, the U.S. will start reaching out to other major political players in Pakistan," he added.

Ms. Curtis contended Washington policymakers are concerned about what might follow Gen. Musharraf, "but they haven't had their heads in the sand over the last four months either and they realize that Musharraf's popularity has declined over the judicial issue."

From Washington's perspective, the best scenario probably involves Gen. Musharraf remaining at the helm for a limited period of time in which he leads a crack down on the extremists as well as spearheads a smooth transition to democracy. "But the situation is highly unstable at the moment, and Washington is adopting an extremely cautious position," Ms. Curtis said.