Like a star of exceptional talent pushed too hard, Punjab's agricultural miracle is on the verge of collapse. Multinationals are vying to bring large-scale industrial agriculture to India--precisely what the country doesn't need 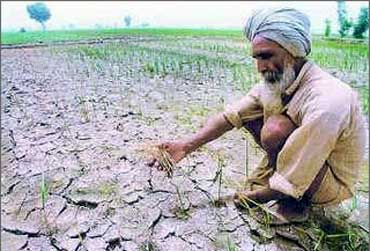 Last month, the wheat fields in the Indian Punjab stretched in amber-tinged waves as far as the eye could see, promising bountiful harvests. Nothing hinted at the grave crisis that has gripped the state, driving farmers to suicide and unemployed youth to the comforts of heroin. Dubbed "the breadbasket of India," Punjab is in the throws of a serious crisis, one that bodes ill for the future of agriculture at a time when the world faces an acute food crisis.

Punjab's grand narrative, a success story of bumper harvests, conceals dangerous subplots of pesticide poisoning, water shortages, soil salinity, fertilizer runoff, skyrocketing cancer rates, farmer indebtedness and drug addiction. Viewed in the context of a report released April 15 by the Assessment of Agricultural Knowledge, Science and Technology for Development (IAAKSTD), an intergovernmental entity initiated by the World Bank and the United Nations Food and Agricultural Organization (FAO), Punjab's saga is a case study in how industrial agriculture boosts yields in the short term, but leads to the long-term destruction of the land on which agriculture depends and of the social and environmental context with which it's intimately linked.

The result of three years of study undertaken by 400 experts, the IAAKSTD report comes to an urgent conclusion: "Business as usual is not an option." Robert Watson, IAAKSTD director, warns that if radical changes aren't made in how we produce and distribute our food, "the world's people cannot be fed over the next half-century," and we will be left with "a world nobody wants to inhabit."

In the early decades of independence, a fledgling Indian democracy had trouble meeting its basic food needs. By the mid-1960s, facing mass famine, the proud young nation had to go begging for emergency food assistance. The Green Revolution arrived in India shortly thereafter. Yields skyrocketed. Attaining self-sufficiency in food was a proud achievement for a nation weaned on the Gandhian notion of swadeshi, or national self-sufficiency. In 1995, India catapulted into the ranks of the world's food exporters. Even those who lamented a starkly inefficient distribution system that left many hungry admitted that India did produce enough food.

Nowhere in India did the Green Revolution work its magic as it did in Punjab. Punjab became the poster-child for the power of agricultural science to extract from the Earth an unprecedented level of productive capacity. New hybrid seeds, massive irrigation projects and synthetic fertilizers transformed ordinary crops into the equivalent of athletes on steroids. Mechanization arrived in the form of tractors, reducing man-hours required in the fields. With just 1.5 percent of the nation's land, Punjab produces 20 percent of India's wheat and 12 percent of its rice.

But Punjab's agricultural miracle can no longer keep pace with India's growing need for food. Every year, India adds 18 million people to its population, the equivalent of an Australia. Nor can it compensate for the rest of the country's lower agricultural productivity. India's booming services and industrial sectors together drove overall economic growth last year to a record level of 9.7 percent. However, agriculture, on which 70 percent of India's people still depend for survival, actually contracted from a lackluster 3.8 percent growth rate to a dismal 2.8 percent rate.

Meanwhile, India's emerging middle classes demand more food, especially more animal products such as milk, eggs, poultry and meat--all of which take more grain to produce. The booming global biofuels market has tempted some Indian farmers to divert production to biofuel crops, while galloping urban and industrial expansion eats away at India's agricultural land. Since 2003, India has had to import more of its food, including wheat, edible oil and dry legumes.

These factors have placed stress on Punjab to increase its amazing production even more. Deeply concerned about food shortages, and the unrest these could trigger, the government of India has urged the state of Punjab to concentrate on two crops, wheat and rice, deemed vital to assuring national food security, even as the state's agriculture experts warn that diversifying crops are vital to protect the productive capacity of a hard-worked land.

Like a star of exceptional talent pushed too hard, Punjab's agricultural miracle is on the verge of collapse. The canals--"Punjab" means the land of five rivers--that channel water to dry fields, allowing water-thirsty rice to be grown where rainfall alone would never support it, are going dry. Where farmers have tube wells, they find it necessary to sink them deeper and deeper. Nitrites from synthetic fertilizers have polluted much of the groundwater. Over-irrigation increased salinity in the soil. Pesticides have permeated the soil, plant and animal life. Cancer rates have reached alarming proportions.

Punjab's farmers, like farmers across India, have borrowed money for inputs they must use to increase production on the industrial model. Price of these inputs--more expensive hybrid or genetically modified seeds, fertilizers, pesticides, tube wells, tractors--relentlessly increase. Like the more than 100,000 indebted farmers across India who have killed themselves in the past decade, some Punjabi farmers see no way out other than suicide. Drug addition ravages the youth of Punjab, disenchanted with farming and hard-pressed to find other work. The government of Punjab estimates that an astonishing 40 percent of the state's youth and 48 percent of its farmers and laborers are addicts.

India has been receptive to the argument of transnational corporations--that opening up agriculture to more private investment and allowing corporations to establish cold chains and vertically integrated production and distribution systems could solve India's agricultural crisis. The IAASTDT report notes the "considerable influence" of transnational corporations in encouraging more intensive industrial agriculture. Large transnationals, including Cargill, Monsanto, Syngenta, Wal-Mart and Carrefour as well as cash-rich Indian giants such as Reliance, Bharti and Tata are eager to reap the potential bonanza of bringing  large-scale industrial agriculture to India.

If the findings of the IAASTD report are given any credence, this is precisely the wrong direction for Indian agriculture. India would do better to look toward successful ventures in community-based natural farming, such as those undertaken by the Centre for Sustainable Agriculture in Hyderabad, which have dramatically boosted yields, allowed poor farmers to repay debts, and removed synthetic fertilizers and chemical pesticides from food production.

This type of radical overhaul is needed on global scale. The IAASTD report pleads for an end to thinking of agriculture solely in terms of production, with social and environmental costs born by individual farmers, consumers, governments and ecosystems. It argues that the only hope for feeding a growing global population and for restoring our degraded land, polluted water and fractured societies lies in adopting an approach where agricultural practices promote equitable access to food and sustainable use of the environment on which humanity depends.

The dilemma for Punjab, India, and the rest of the world faced with hungry populations and a collapsing environment is how to reconcile the powerful forces of a global economic system driven by the relentless imperative to increase production--and consumption--with a holistic approach. This larger, more difficult question is, as the IAASTD report suggests, at the heart of the global food crisis.

Mira Kamdar is the author of Planet India: The Turbulent Rise of the Largest Democracy and the Future of Our World and a 2008 Bernard Schwartz Fellow at the Asia Society in New York. Rights: © 2008 Yale Center for the Study of Globalization. YaleGlobal Online

Running Out Of Food