'The Biggest Challenge Is Between You And Your Imagination'

Whatever can be done, will be done, says the author of the Flat World. Outsourcees can and are becoming the outsourcer, while globalization is actually making people far more aware of the issues of climate change... 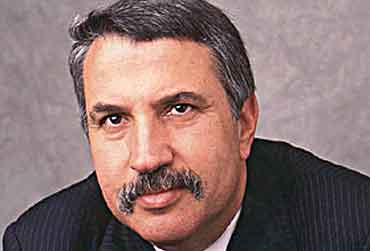 Nayan Chanda: I was wondering if you could tell me about the new version of your book The World is Flat.

Thomas Friedman: I’m coming out with the 3.0 edition which will be out in August, it will be paperback finally, and I’ve added, I would say, three major sections: First, I redid a chapter on kind of rules for business operating in the flat world…. And the iron business rule of the flat world that applies to more than just business I would argue is this . . . Because when the world gets this flat, when so many people have this much productivity, and this many distributive tools of innovation and collaboration, if you have an idea, Nayan, promise me you’ll do it, because someone in Slovenia will. Because there’s too much education, too much knowledge, too much connectivity and too much distributive tools of innovation – "too much" in inverted commas – I think it’s wonderful, that whatever can be done, will be done. And then what I do is actually give a whole set of examples of the incredible mix ‘em match ‘em combinations that people are creating out of nowhere to create global companies.

Nayan Chanda: It is not just anything that could be done online, it is actually real matter.

Thomas Friedman: Exactly, it’s both atoms and electrons and digits basically….I’ve got a lot of examples. I talk about the Indian outsourcing company Satyam, one of the big Indian outsourcing companies, which has begun a program through its foundation actually where maybe a major American company like GE outsources work to Satyam, Satyam now outsources part of that work to Indian villages. Because they discovered that there’s an end of that work which is relatively simple, but that can be very high value added for an Indian villager, there’s enough educated personnel now in an Indian village … and enough technology that the outsourcee can become the outsourcer…. And I think it’s actually driving the global economy and a lot more small business than people realize.

Nayan Chanda: People talk about globalization as corporate driven, but what you are telling me is that it is driven by a lot of people, individuals and small companies.

Nayan Chanda: ….Yet judging by what we read in the American press, there is a growing concern that this is going to lead to more and more job loss. And recently The Wall Street Journal had a piece in which it quotes Alan Blinder, the former Clinton economic advisor, as saying that up to 40 million jobs, American jobs, are going to be lost because of outsourcing….

Thomas Friedman: Well, I think Alan is on to something. Alan is someone who, in my experience and in my conversations with him, has understood the implications of the flat world as well as any, if not better than any other economist. And he’s understood that when this much work can be made fungible, digitized, that it will go wherever it can go. It’ll be like water, it’ll find its natural, most productive and efficient point, and that’s the flat world. And I think what Alan has contributed to the discussion is actually a very careful analysis of every job and even slices of different jobs, whether it’s lawyering or financial services or design, and saying "this slice, now, is so digitizable, it’s transferable" and that means if it can be done, it will be done.

Nayan Chanda: So the question then is, what does one do to cope with this possible job loss, especially the middle class or educated class, which is new in America. Blue-collar jobs have been lost since the 1970s, but this is something new.

Thomas Friedman: The key thing is to know what world you’re living in….We know what the old middle-class jobs were. A lot of those were blue-collar jobs, but what are going to be the new middle jobs?... And I actually created a category, a list of nine, they’re broad categories …. And I think if you can fit into one of those categories, you’re going to be fine. Now, at both ends, there are jobs that are going to be fixed. At one end are people who are really special and specialized: Michael Jordan, J.K. Rowling, your brain surgeon, no problem, they’re safe. They’re not going to be outsourced or digitized. At the other end are people who are localized and anchored: your butcher, your baker, your candlestick maker, this cameraman here until they get a robotic camera, so they’re all fine.

But in between, there are a lot of jobs… you want to try to be in one of these categories…. great collaborators, people who can collaborate over 24/7. Great leveragers, people who can leverage technology so that one person can do the job of 20 rather than 20 doing the job of one. Great localizers, people who can take the power of the flat world and create a local small business out of it – the eBay entrepreneur or the sports-bar owner that suddenly discovered he can have 25 big-screen TVs in his bar and have curling from Sweden and figure-skating from Japan, doesn’t have to have just NFL Monday Night Football. Great … explainers, because when the world gets this complex, whether you’re a manager, a teacher, a professor or a real estate agent who can do modeling, there’s going to be huge, huge demand for people who can explain. Great adapters – people who are simply good at adapting to whatever new….

Another category, math lovers… in a world where everything’s digitized, that means everything’s been reduced whether it’s words, photos, data, spreadsheets, to ones and zeroes. Well if it’s all in ones and zeroes, what does that mean? It’s all analyzable by algorithms, and that’s why, of course, Google is just an algorithm, so many advertising campaigns, marketing campaigns, will be built on math now, rather than intuition…. One other category I call passionate personalizers. If you can bring a passionate personal touch to any new middle job, it won’t be outsourced or digitized.

Another category [is] anything green. Tell your kids, anything green. Because when the world is flat and 3 billion new consumers walk onto the flat world all with their own version of the American dream – a house, a car, a toaster, a microwave, a refrigerator, if we don’t find a cleaner, greener way to power their aspirations, we’re going to burn up, heat up, choke up the planet faster than even Al Gore predicts. What does that mean? It means green design, green consulting, green manufacturing, green science, is going to have a huge new middle opportunity.

Nayan Chanda: That’s one area where perhaps globalization actually comes to help create new jobs, because this global concern about climate change is creating the condition where priorities are given to the climate aspect of any venture, and this opens the possibility for innovation and new jobs that didn’t exist before.

Thomas Friedman: Well you’re always on to things, Nayan, you’re always right on the cutting edge. So I’ve just finished a magazine piece for the New York Times which is going to be out April 15 called "Green is the new red white and blue," and we’ve got a documentary version of it coming out on the Discovery Channel on April 21st, Saturday night at 9pm…. I build [the story] around GE Transportation. GE Transportation sounds like a bland name, it’s a company located in Erie, Pennsylvania, middle of the American Rust-Belt. Erie, Pennsylvania, Nayan, has a trade surplus with Mexico and China…. But GE Transportation sells locomotives to a railroad country called China, even though China has a locomotive product that is 30 percent cheaper because of its cheap labor. How is that? Because GE’s is so energy efficient on a total operating-cost basis, it can out-compete the cheap-labor Chinese. Now, if you go to GE Transportation, what their manager will tell you is that it looks like a dilapidated old factory. Inside, he says, we’re a knowledge camp. Because green now becomes a value, the only way that you can get green is by applying enormous amounts of knowledge. What do we have, what is our value-added? We can apply not cheap labor, but knowledge to things. And when green becomes a new value, the ability for us to apply knowledge to it becomes a huge competitive advantage….

Nayan Chanda: The other aspect of globalization, which is that globalization is actually making people far more aware of the issues of climate change than it would be otherwise possible….

Thomas Friedman: … [T]he flat world is bringing 3 billion more people from low-impact environmental lifestyles to high-impact environmental lifestyles, as they buy cars, refrigerators and microwaves, so that is intensifying climate change, from China, from India, from Brazil. That’s going on one track. But another thing that’s happening is that people are also becoming aware it’s one world. It’s not that China’s my backyard, the EPA, the American Environmental Protection Agency, has concluded that 25 percent of the polluting matter in the air above Los Angeles on some days comes from Asia, comes from factories in China or desertification and sandstorms kicked up in Asia and brought over by atmospheric winds. But the last thing that’s going on is that the world gets this flat. Social activists, environmentalists, who want to bring pressure on bad actors, now have enormous leverage to do so.

Mysore, Once Upon A Time