Home  »  Website  »  Society  »  The Better Half... Of Britain
Outlook Traveller

The Better Half... Of Britain

Here's the lowdown on the Highlands: The whisky is great and the Great Glen is greater. Never mind the weather 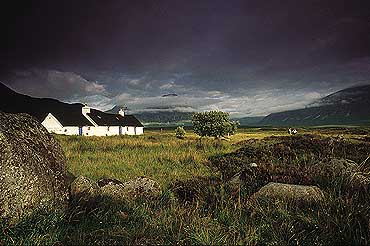 outlookindia.com
-0001-11-30T00:00:00+05:53
Scotland is like Bangalore. Only smaller. Demographically speaking. They both have a population of around five million. Apart from that, Scotland is nothing like Bangalore. It’s more like...Meghalaya. Or so the Meghalaya Tourism Development Corporation would have us believe. I wouldn’t know. I’ve never been to Meghalaya.

But I have just been to Scotland, or ‘Surprising Scotland’ as the Scottish Tourism Board has it. And I’m happy to report they’re right. The most surprising thing is the emptiness. Most of those five million souls are packed, quite neatly, into the urbs of Edinburgh and Glasgow. Leaving the Highlands more or less Scot-free.

If you should locate a native though, you will quickly bond with the Scotsperson’s sentiments towards a Certain Community, who once ruled us. The perennial struggle with ‘the auld enemy’ has left an indelible mark on Scottish conversation. Some of this will be familiar from cliché, some from Hollywood. The rest, believe me, you will hear about. Any tour of the Highlands will have the same soundtrack: a burry philippic running from Bannockburn to Culloden, from the Highland Clearances to North Sea Oil. But the Scots, like Mr Bruce’s spider will never give up.

If you want to change the subject, do not, as we are apt to, try something on the lines of "Yes but, the English did give us a few things. You know—the railways..."

This will lead you directly to National Anthem #2: "Nae mate! That’s Scottish! Also the cycle, the telephone, the postage stamp, democracy, fudge...all Scottish!" At this point you should raise your glass of whisky (an Irish patent) and concede that the Scots are great inventors.

In truth, the Scots do have a couple of inventions to their name. Geology for one. The credit here goes to James Hutton, who published his two-volume Theory of the Earth in 1795. His understanding of the cycles of rock erosion and formation were based on 40 years of observation around Scotland, a remarkable preoccupation at the time. Samuel Johnson had just returned from his curmudgeonly tour of the Highlands, telling poor Boswell that "your country consists of two things, stone and water." But Hutton knew Scotland had the oldest rocks in Europe and he pronounced them very Gneiss. Unfortunately modern geological science has since revealed that the Highlands are an English invention, formed when the perfidious southern landmass crashed into the Scottish plate some 450 million years ago. But as a non-combatant visitor I was happy to just enjoy the consequences.

Heading north from Glasgow I stopped briefly at Loch Lomond, whose shores are bonny enough, though ‘bonny, bonny’ is stretching it a bit. No matter, because we were entering the Highlands and everything was about to improve dramatically. Turning west towards the coast and then north along the shores of Loch Awe, we passed Kilchurn, the first of many ruined castles (aye, the English), to Oban, home of a robust coastal single malt.

North of Oban the road begins to follow what is surely Scotland’s most dramatic geological feature. The Great Glen Fault is visible on any map, cutting right across the country from the Firth of Lorn to the Moray Firth and cleaving the plumage of the Outer Highlands from the rest of Britain. Anyone who thinks there are no straight lines in nature should see the Great Glen.

So should everybody else. Following the road eastwards to Loch Leven, we reached Ballachulish, a good place to stop. A short detour from the Great Glen brings you to the haunting valley of Glencoe, site of an infamous massacre in 1692 (aye, aye, the English). Continuing along the fault we reach the town of Fort William which sits rather dramatically at the foot of Ben Nevis and at the start of the series of Lochs that fill the Great Glen: Loch Linnhe, Loch Lochie, Loch Oich and finally Loch Ness. You can follow them all the way to Inverness on the east coast, either by road or by boat along the Caledonian Canal which stitches the Lochs together.

The straightness of the glen road was relieved by a northward diversion to Eilean Donan, a faux-medieval castle featured in Kandukondain Kandukondain. They still remember Aishwarya Rai enthusiastically at the Visitors’ Centre here. "The Miss Wurrulld! Aye! Aye! Aye!"

I liked the Great Glen—yes, to a fault. But somewhere along the way gastronomy surpassed geology. By the close of the day at Drumnadrochit, I had consumed a healthy school of salmon, a few litres of ale and discovered ‘Skye coffee’ (active ingredient: Talisker).

Descending from the Highlands on the east is a perilous journey. You have to run the gauntlet of The Macallan, The Glenlivet, The Balvinie, Glenfarclas, Aberlour, Tamnavulin, Cragganmore...In a word, Speyside. More than half of Scotland’s malt whisky is produced in this watershed. As we reached the safety of the Cairngorms the sky cleared to an utterly unscottish blue and the sun shone down on the panicked populace. I was floating. It’s like Ladakh, I thought. Only lower. But that was the whisky talking. Now that I’m clean again, I’ll tell you the truth. The truth is Scotland is like England. Only better.