The BBC's Pashto service interviewed Taleban leader Mullah Muhammad Omar. Questions were asked through a Taleban intermediary over satellite phone who passed them on to the Taleban leader through a hand-held radio and then attached the phone's receiv 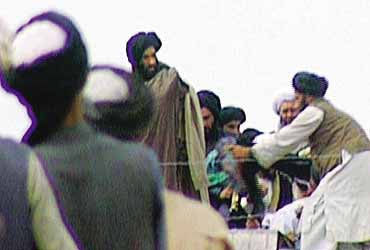 BBC: What do you think of the current situation in Afghanistan?

Mullah Muhammad Omar: You (the BBC) and American puppet radios have created concern. But the current situation in Afghanistan is related to a bigger cause - that is the destruction of America.

And on the other hand, the screening of Taleban [for those who are or are not loyal] is also in process. We will see these things happen within a short while.

BBC: What do you mean by the destruction of America? Do you have a concrete plan to implement this?

MMO: The plan is going ahead and, God willing, it is being implemented. But it is a huge task, which is beyond the will and comprehension of human beings. If God's help is with us, this will happen within a short period of time; keep in mind this prediction.

BBC: Osama Bin Laden has reportedly threatened that he would use nuclear, chemical or biological weapons against America. Is your threat related to his?

This is not a matter of weapons. We are hopeful for God's help. The real matter is the extinction of America. And, God willing, it [America] will fall to the ground.

BBC: During the past few days, you have lost control of several provinces. Are you hopeful to regain the lost territory?

MMO: We are hopeful that you will see the same kind of change that you saw [losing and regaining territory].

BBC: What was the reason for the fast retreat? Why have your troops fled the cities? Is it because you suffered heavily from the US bombings or have your soldiers betrayed you?

MMO: I told you that it is related to the larger task. The Taleban may have made some mistakes. Screening the Taleban [for loyalty] is a big task. And these problems may serve to cleanse [errant Taleban] of their sins. But there is a big change underway on the other side as well.

BBC: Can you tell us which provinces are under your control at the moment?

MMO: We have four-five provinces. But it is not important how many provinces we have under our control. Once we did not have a single province, and then the time came when we had all the provinces, which we have lost in a week. So the numbers of the provinces are not important.

The struggle for a broad-based government has been going on for the last 20 years, but nothing came of it. We will not accept a government of wrong-doers. We prefer death than to be a part of an evil government. I tell you, keep this in mind. This is my prediction. You believe it or not - it's up to you. But we will have to wait and see.