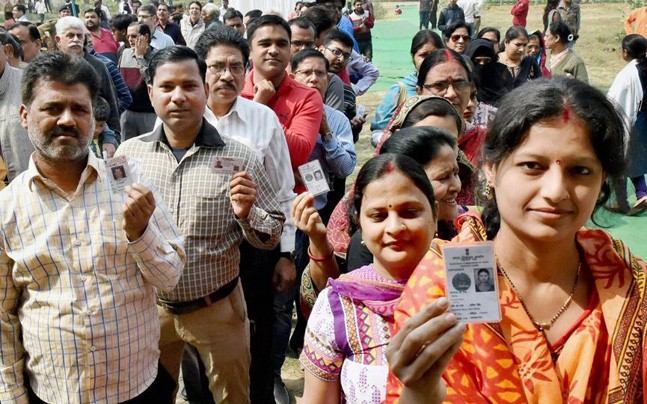 Contrary to media hype in the last two days over a “BJP sweep” in the Uttar Pradesh (UP) urban local bodies elections, the results demonstrate considerable waning of the pro-BJP mood that helped it win Uttar Pradesh assembly elections barely eight months ago.

True, the BJP which fought the Nagar panchayat, Nagar Palika and Nagar Palika Parishad elections stood first among all the other political parties that contested, including the former ruling party Samajwadi Party (SP), the Bahujan Samaj Party (BSP), Congress and the Rashtriya Lok Dal (RLD).

But then the party alone won 71of the 80 Lok Sabha seats in the 2014 general elections, which is roughly 89%. Then in the February assembly polls, the BJP won 312 seats in a House of 403, which works out to 77%. In percentage terms in the assembly polls, the BJP percentage of votes had then jumped from less than 15% to around 40%, a quantum jump. Given this background, the BJP performance in local body polls is a let-down.

The only major victory the BJP and its drum beaters are gloating about is the Mayor elections where it succeeded in getting its mayors in 14 out of 16 towns, with the surprising exception of the communally surcharged Aligarh and Meerut towns, where Mayawati’s BSP nominees won. These were the only elections where the electronic voting machines (EVM) were deployed and the media could not help report at least a couple of instances of the machines malfunctioning. It’s also a mystery why the Election Commission chose to introduce EVMs for mayoral polls when all the other categories were held through ballot paper.

The fact that chief minister Yogi Adityanath led his entire contingent of 48 ministers plus the 100-strong UP BJP state office bearers that spread out to every nook and corner of the vast Uttar Pradesh to campaign for these polls show the urgency of the party to project a victory in these elections. Some of them openly threatened Muslims to vote for the BJP or face the consequences.

Yet the results of the nagar panchayat members, nagar palika members, nagar palika parishads and their chairpersons clearly show a growing disenchantment with the BJP even in this new saffron fortress, to the extent that 71.31% nagar panchayat members are independents and still the BJP could get only 100 of the 438 chairpersons elected. With one result yet to be declared, 337 chairpersons are non-BJP, for in this election there were no alliances and each party independently fought against the main adversary BJP.

The state has a strength of 5,434 Nagar Panchayat members of which the BJP won only 662 and lost 4,728 to others, including an overwhelming majority of independents as also SP, BSP, Congress and RLD.

Naturally, then it also lost the Nagar Panchayat chairperson elections too also held through ballot papers. There were total 438 seats. Results declared: 437. BJP won 100 and lost 337.

We say lost because unlike other smaller players the BJP contested for all the seats.

BJP president Amit Shah gave an interview mocking the Congress party and Rahul Gandhi for the poor show in these UP local bodies polls. But the Congress has not been a significant player in Uttar Pradesh for over two decades now and so its poor showing is no news.

The BJP managed to win mayoral polls in Rae Bareli and Amethi, the pocket burroughs of Congress president Sonia Gandhi and vice president Rahul Gandhi. But Amit Shah won’t disclose this and no one would mention it but the fact remains that the Congress percentage of votes this time improved considerably compared to the February assembly elections when it got only 6.2 per cent. This time it went up to 10 per cent. No consolation to the Congress no doubt.

But then it is contrary to what the BJP propagandists are shouting from the rooftop. What they are not saying is that the BJP vote share has come down approximately by over 9 per cent from 39. 7 to 30.8. It seems then that what the BJP lost in these eight months, the Congress gained.