Folklores and legends show that the fight to enter temples in south India has always been a knotty issue. 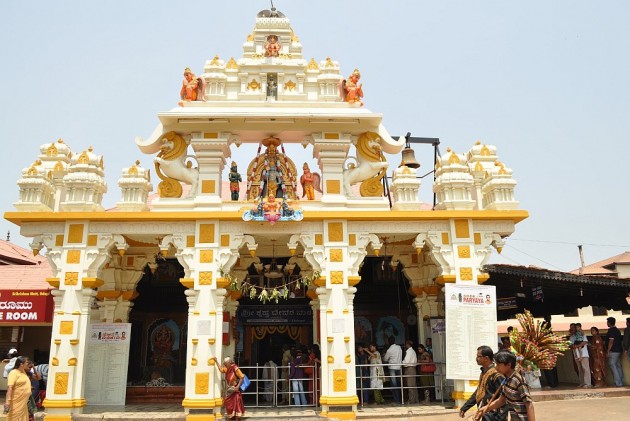 The sthala puranas or temple legends of south India are repositories of tales that provide vital details to show how segregation was practised to bar the entry and access to temples to all. Religious cults, caste and gender often served to reinforce the exclusion.

Nandanar was a 7th century Shiva devotee who was the first Dalit to be included in the haloed group of 63 Saiva Nayanmars or saint poets. In popular lore he is associated with the Sivalokanathar Temple, Tirupunkur in Thanjavur where he prayed to "see the lord" as he was barred from entering the temple.

Standing outside the temple precincts he craned for a vision of the deity but could not, as the large idol of Nandi, the celestial vehicle of Shiva, blocked his view. Upon hearing Nandan's plaintive singing, legend has it the idol of Nandi, located right in front of the Shiva shrine, shifted to offer him a darshan.

Nandan was later canonised following the "miracle" at the Thillai Temple at Chidambaram. Legend has it that Nandan walked through a Vedic fire to emerge to be included into the fold of Brahmin priests and enter the temple. Contemporary versions differ from the 12th century Periya puranam of this trial by fire incident. Modern versions indicate that Nandan might have been burned for his audacity to enter the temple that is even today home to the Dikshithar priestly clan.

Kannappan or Thinappan was an untouchable who hunted animals in the forest. Legend has it that his devotion offering meat and once gouging his eyes to stop the bleeding eyes of the Shiva lingam at Kalahasti (in Andhra Pradesh) proved the extent of his piety. He was again canonised among the Saivite saints.

The renowned Sri Krishna Temple at Udupi, in Karnataka, has a unique architectural feature: the Kanakadasa Navagraha kindi, a special window that miraculously "allowed" the famous 16th century Kannada saint-seer Kanaka Dasa to have a darshan of Krishna since the temple was not open to the caste he belonged.

In Kerala the cult of god Ayyappan has been in news for barring women in menarche (roughly ages11- 55) to undertake the pilgrimage to the Sabarimala Temple. Various excuses that include the arduous trek through a forest, climbing the 18 steps to the sanctum and the ‘wet clothes' hindering a menstruating women have all negated the plain truth of who makes the excuses and for whom to exercise their free will to enter a place of worship.

Segregation has been a feature with gender based cults for temple worship. Legends and folklore hint that the god Ayyappa was born of a union of two male deities-Shiva and Vishnu- and thus the cult prefers the devotion of male devotees.

Similar is the singular cult for alternate sexuality and worship at Koovagam in Tamil Nadu for the god Aravan that witnesses the festivities that brings trans people, hijras and homosexual devotees from all over the country. The cult of transgender temple worship is evident from the Arthanaareswar Temple at Tiruchengode in Tamil Nadu that was recently in news with Tamil writer Perumal Murugan's novel Madhorubagan about the practises of the cult.

As is the case of the women's movement being more inclusive, the popular cult of the goddess or Bhagavathy Amman temples in Kerala have larger women offering prayers but male devotees are never disallowed from participating in the temple's prayers or festivities.

While modern amendments in states like Tamil Nadu have included non- Brahmins into priesthood and the offering of prayers in Tamil besides Sanskrit, the segregation of menstruating women remains more of a silent taboo ingrained in the minds of many modern women. Temple authorities, who ordain that gods listen to prayers in Tamil and from priests of all castes, also dictate what women ought to wear to enter temples.

If those tales from the temples, of the past, speak of how caste was subverted to make devotees of men of all castes and creeds, the time has come to make a fact of allowing women any day, anytime and in any garment to enter the temple. And gender based cults have to adopt a fluid policy to encompass devotes from all walks who wish to exercise their choice in worship.

If the 21st century is not time for reformation in archaic practises and obsolete traditions, then when?