The way to counter the Australians' short-pitched stuff is obvious. Take it on. 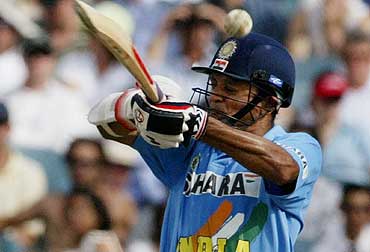 The way to counter the Australians' short-pitched stuff in one-day cricket is obvious. You need to take it on. The best man to lead the Indians in this quest is the great man himself, Sachin Tendulkar.

But the little genius seems to have gone into his shell lately. He seems to have shelved his plans on hooking. He is not backing himself enough. He just needs to be far more aggressive and pick up his shot-making ability. It could be he is not watching the ball closely. Generally a player knows what he needs to do and Tendulkar understands what the answer to the present poser from the Australians is.

Australia's game plan in the first finals which everyone has been talking about was pretty simple. They wanted to bowl aggressively and a lot of short-pitched deliveries at the Indians. They were also helped by the fact that the MCG pitch was a little two-paced. The odd ball took off a little bit more and so it was difficult to play cross-bat shots. That's the impression I carried talking to the players.

The Australian method was to bowl a lot shorter and make the ball come up waist high, in the chest region. They also bowled a lot straighter. On occasions, they used the set play -- the third man comes in, a man goes deep for the hook. They made those little, subtle changes in the field. It's a captain's call. Everyone knows what the next delivery is, all the fielders and bowlers, except for the batsman that is. The Australians have generally bowled lot aggressively in the last two games against India.

It paid happy dividends. The top guns of Indian batting couldn't come up with an answer. Indian captain Saurav Ganguly in particular has been targeted with the short-stuff. He doesn't look to pull or hook and generally essays cross-batted shots. He tried to counter-attack in Melbourne but didn't look comfortable doing it.

The Australians have worked hard at their game plan and the return of Brett Lee has just been the kind of news they wanted before the summer ended. Lee has bowled with good pace and aggression in the last two games and generally when he is in good form, it tends to lift the rest of the attack.

If it was Lee in bowling, Adam Gilchrist represents Australia's aggression in batting. 'Gilly' has a certain role within the team. He's been very, very aggressive in the first 15 overs. If he gets through that period, he calms down and generally looks to pile on a big score. With the field restrictions in the first 15 overs, he generally likes to play really hard.

Ricky Ponting too got his bearing after not looking in particularly hot form in the last few games.

Australia is a team which tends to lift itself around important games. This has been pretty noticeable in recent years. They made the Indian batsmen cop a battering in Perth. Both Lee and Jason Gillespie got them a little out of sorts. And then their batting continues to shine.

Still the Indians should find Sydney to their liking. It should restore some of their confidence. They have played very well here and this is a kind of wicket which suits their style of game. They looked good in both the games they played at the SCG -- the final Test and then the one-dayer which was only won by Lee's heroics with the bat. They should have the confidence of the conditions.

I wouldn't think the season is over. They just need to get themselves sorted out tomorrow. They need the big guns like Virender Sehwag and Tendulkar to give them some sort of start. They need to be positive, right till the last man. Now that the tail has started to perform, they needn't fear any sudden batting collapses as well.

Their bowling has generally stood up to the task. It will be interesting to see what answer the Indians would have to Australia's strategy to test them with short deliveries on Sunday.