Shah Rukh Khan greeted and thanked his fans for birthday wishes outside his residence 'Mannat' in Mumbai. 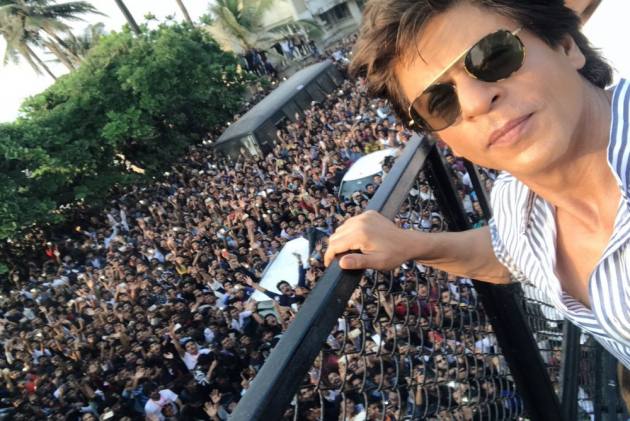 Shah Rukh Khan, who turned 53 on Friday, greeted thousands of his fans outside his residence ‘Mannat’ in Mumabi at midnight and thanked them for their wishes.

"We have been waiting here since a long time to get a glimpse of Shah Rukh. He is my favourite superstar," said one of the fans, who via different antics wished Shah Rukh outside Mannat.

Shah Rukh came outside for a few minutes to thank his enthusiastic fans and greeted them with folded hands. Looking at the situation, security was beefed up well in advance outside the actor's residence.

The 'Raees' actor ringed in his birthday with his family members and took to his official Twitter handle to share sneak peeks from his late-night birthday celebration.

"Fed cake to wife...Met my family of fans outside Mannat...now playing Mono Deal with my lil girl gang! Having a Happy Birthday. Thank u all...for this amazing love," the actor wrote.

Fed cake to wife...Met my family of fans outside Mannat...now playing Mono Deal with my lil girl gang! Having a Happy Birthday. Thank u all...for this amazing love. pic.twitter.com/8IthQY3cxQ

In one of the pictures posted by him, the 'Badshah' can be seen feeding cake to his wife, Gauri Khan, while another picture shows him standing in his balcony and thanking his fans for their love and wishes. A third picture shows King Khan's kids sitting around a table playing a game.

Filmmaker Karan Johar also posted the picture of SRK feeding cake to Gauri Khan and wrote a sweet caption alongside the photo on his official Instagram account.

"Happy birthday bhai!!!! Have known Gauri and you for 25 years and it will always be the most special relationship of my life!!! Thank you for being family and for all the memories ...and here's to many more!!! May #zero be your biggest and hugest blockbuster!!!," he wrote.

Wishing Shah Rukh Khan on his birthday, West Bengal Chief Minister on Friday expressed her elation to meet him at the Kolkata International Film Festival (KIFF).

"Very happy birthday to you Shah Rukh. Stay healthy and happy, my charming brother. Proud to have you as Brand Ambassador of #Bangla," Banerjee tweeted.

Mentioning Shah Rukh's presence at the KIFF she wrote, "Keep entertaining us with your films and achieve all the success in life. We will meet soon at the Kolkata International Film Festival #KIFF2018".

Very happy birthday to you Shah Rukh @iamsrk. Stay healthy and happy, my charming brother. Proud to have you as Brand Ambassador of #Bangla. Keep entertaining us with your films & achieve all the success in life. We will meet soon at Kolkata International Film Festival #KIFF2018

King Khan will be releasing the trailer of his much-anticipated movie 'Zero' later on Friday.

The trailer will be released at a grand event which will be attended by SRK and the leading ladies of the film - Anushka Sharma and Katrina Kaif.

The makers of the film have planned on taking the event a notch higher by recreating Meerut city through a colourful mela-like set up comprising food joints and game stalls.

In the film, SRK plays the role of a vertically challenged man who falls in love with a superstar, played by Katrina, while Anushka will also play a pivotal character.